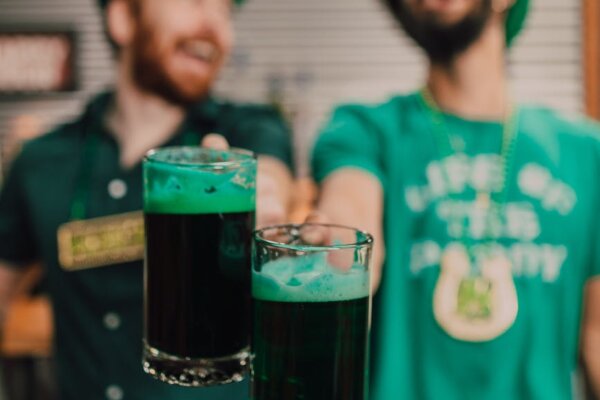 St Patrick’s Day celebrations are HUGE in Liverpool. But hang on we’re in England, aren’t we?

Here in Liverpool (as well as many cities in England), not only do we take the 23rd of April for St. George’s Day, but the 17th of March is also a pretty big day as we take time to celebrate the Irish heritage of the city. Up to 50% of Liverpool’s population is said to be of Irish ancestry! As a result, the city has an enormous Irish population and history.

Almost 50,000 Irish people lived in Liverpool by 1841 and the potato famine that began in 1845 increased this to over 85,000. Immigrants, facing prejudice, worked heavy labour jobs for low pay.

Despite the marginalisation, the Irish population contributed greatly to Liverpool’s legacy and wealth. From helping dig the docks to influencing the scouse accent as we know it today, Liverpool would not be the same without the Irish.

Additionally, the Metropolitan Cathedral, otherwise known as ‘Paddy’s wigwam’ would not be standing here today as an iconic Liverpudlian landmark without the influence of the large Irish population.

So why not celebrate these people who have contributed to the amazing city we call home. How better way to do this than join in on the St. Paddy’s day shenanigans this Thursday the 17th?!

Irish or not, here’s a rundown of the pubs you cannot pass by on your pub crawl…

So if you’re living on Smithdown, Kelly’s is a great place to start.

With a vintage feel to the pub, you’re sure to feel at home here if you’re Irish! And if you’re not, this is the perfect place to immerse yourself into the culture (just try to forget you’re actually on Smithdown Road).

Flanagan’s have top notch pub scran to accomany your pint. On St. Patrick’s day they’re doing a bottomless brunch- scrap the pub crawl, why not spend your whole afternoon here!

And then it’s on to Pogue’s!

Pogue Mahone’s has live music 7 days a week so it’s a great place to spend your Friday or Saturday (or even Monday, Tuesday…) night. However, St. Paddy’s day is sure to be the main event this Thursday!

Shenanigans is a MUST for a St Patrick’s Day pint as like it’s namesake, it is shenanigans!

You’re sure to have a well poured pint of Guinness from here!

Where else would the crawl come to an end but Concert Square’s very own McCooleys.

McCooley’s is a great mix between pub and club and is a sure stop for any night out, never mind St Patrick’s Day!

Wherever you end up, make sure you have fun and we hope the luck of the Irish is with you!

Alternatively, if you’re planning on celebrating at home check out our guide to making the best St.Patrick’s day drinks!