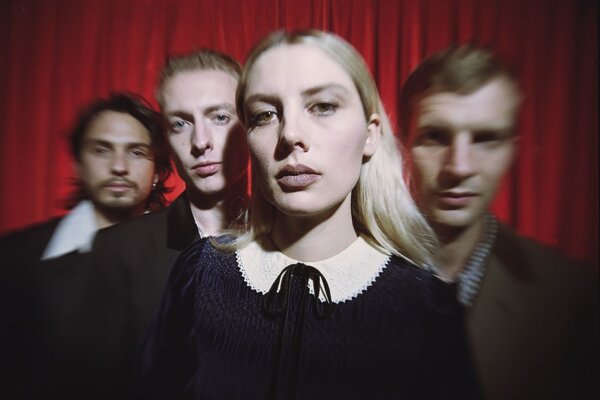 Wolf Alice’s performance at Mountford Hall was the ultimate let-your-hair-down event. Quite literally, my scrunchie fell out 30 seconds into their set.

Wolf Alice served up everything we had hoped for and more. They are possibly the most good-looking band EVER, with each member having their own personal aesthetic. They are ultimately so cool, they left us wanting to be (or else, be with) them.

For those of you (including me!) who haven’t heard of Matt Maltese before, he is a singer / songwriter born in Reading and is now living in Camden, London.

Mellow and chill vibes oozed from Matt Maltese. His indie rock / pop style paired with slow-tempo songs was raw and heartfelt. He was mesmerizing and unquestionably led a few crowd members to wear please-notice-me stares.

I thoroughly enjoyed hearing Matt for the first time, and he was amazing live. My favourite song he played was ‘Curl up & Die’, I’d also recommend taking a listen to ‘As the World Caves In’ and ‘No One Won The War’.

Safe to say, the set was definitely the calm before the storm!

Wolf Alice entered with ‘Smile’ from their 2021 album titled ‘Blue Weekend’. This was not the only thing that blew the crowd away, however. The mosh pits did a pretty good job of blowing the crowd away or rather, pushing the crowd over.

Several calamitous falls and hair-tugs ensued, but the atmosphere was absolutely BUZZING. I was having such a great time that I (almost) didn’t mind the beer in my eyes and the sweaty hands brushing my face. It’s all part of the experience, right?

Wolf Alice played alternative songs from their new album including ‘Lipstick On The Glass’ and ‘Play The Greatest Hits’.  There was a good mix between their high-energy rock songs and more soulful numbers such as ‘Safe From Heartbreak (if you never fall in love)’, which has amazing a cappella at the end of the track. The crowd did not miss a word.

The room flooded with ecstatic people, good vibes, and Ellie Rowsell’s shadow cast on the wall – this was a memorable and intimate event.

It’s no wonder that Wolf Alice just won the BRIT Award for Best Group 2022, even against huge bands such as Little Mix and Coldplay.

It was great seeing such a relevant band on our own turf at the Guild. I’ll never be able to eat my Guild burrito in Mountford Hall without reminiscing and wishing they were still up there on stage.

For more upcoming gigs at the Guild including James Arthur and The Vaccines, keep an eye on their website here! And for more live music reviews, check out LGSM contributor Liam Mclaughlan’s article on Glass Animals’ pitstop at Mountford Hall last month!