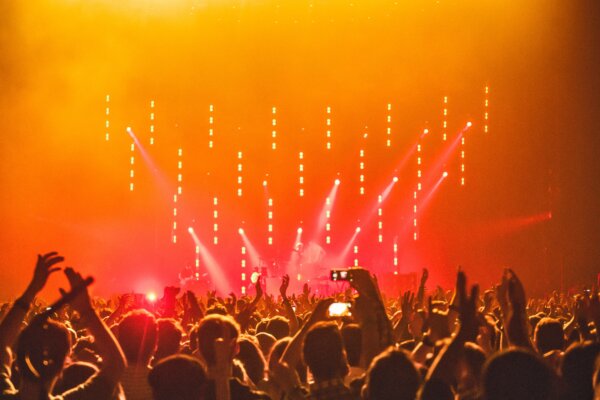 Despite having been aware of Glass Animals growing presence on the music scene, I wasn’t familiar with the majority of their music. Due to the success of their 2020 album Dreamland and hit single ‘Heat Waves’, they were skyrocketing in popularity. Arriving at Mountford Hall that evening, I had no idea what to expect.

Opening act, Biig Piig, was there to welcome the crowd on a particularly windy night in Liverpool. She displayed her Spanish background proudly on stage, mixing Spanish and English lyrics in songs like ‘Perdida’, which was incredibly refreshing to hear. Her soulful and funky performances of ‘Don’t Turn Around’ and ‘Sunny’ set a chill and relaxed tone that flowed with energy, which the quickly growing crowd latched on to. She made the stage her own for the brief time she had it, which had an infectious quality on everyone in the hall. Finishing her set with the soft and groovy ‘Feels Right’, I almost didn’t want her to go. She is definitely one to keep an eye on for the future.

The crowd was so excited for the main event. You could feel the anxious excitement amongst the crowd in the now completely full hall. As Dave Bayley and co. made their way on to the stage accompanied by the deafening roar of the crowd, the lights went out and the stage lit up with neon signs. The drum beat of ‘life itself’ began, but the crowd quickly drowned out the sound with screams of excitement. It was a state of fever pitch as he revelled in the joy, dancing on stage while the crowd sung with him.

Bayley led with many songs from Dreamland, such as the sensual ‘Hot Sugar’ and the pop sounding ‘Tangerine’. The neon signs frenzied to the beat of each song, as did the flash of the cameras of people in the crowd, as ‘Waterfalls Coming Out Your Mouth’ played. ‘It’s All So Incredibly Loud’ stripped back the neon, replaced by bright white lighting under the band as they performed. Bayley looked like a messianic figure pouring his heart out to his adoring crowd.

Bayley carried a supreme stage presence all night, almost appearing to generate the music from his movements. The band’s performance of ‘The Other Side Of Paradise’ was a highlight of the night, with Bayley appearing to bring a new bass drop on each time he rocked his head. He had such a rapport with the crowd, turning the microphone to them for older throwback songs such as ‘Youth’. He usually throws a pineapple out into the crowd to catch, but merely teased this before sharing that he could no longer do it legally. However, a lucky member of the front row was given it.

After announcing this was the last part of their UK tour and thanking the crowd, Glass Animals left the stage. The crowd (and I) began chants demanding an encore, not wanting the night to end. Eventually, they came back out to the relief of the crowd. Their performance of ‘Heat Waves’ was one to remember, electrifying the hall’s energy. Bayley encouraged everyone to sing along to their most famous song at end the night, finishing with a fulfilled crowd ready to brave Storm Arwen.

As we all prepared to brave the furious winds outside, we knew we were doing it having just witnessed something amazing. I entered the hall not knowing what to expect and left as a huge fan of the band. They hooked me from start to finish with their showmanship and musical finesse. I am incredibly eager to see them again.

Any chance of another encore?