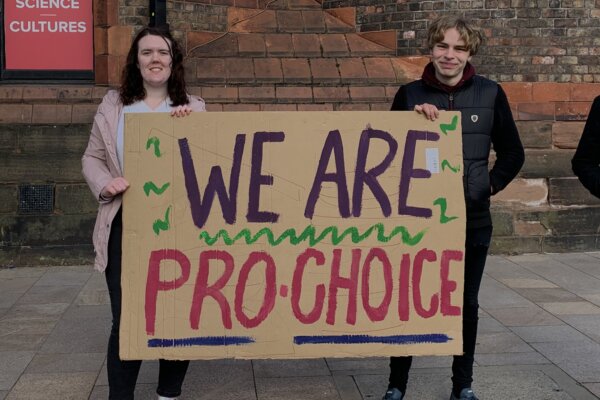 It’s Time for Change: We Still Advocate for Abortion Rights

Trigger warnings: Please note this content discusses abortion. We understand that abortion is a highly contentious topic with religious and societal implications. It has the ability to severely affect individuals. At the end of the article are some links that encourage professional medical advice. Opinion pieces are the view of the author. They in no way reflect the views of Liverpool Guild Student Media or the Liverpool Guild of Students.

In December, I wrote an article titled, ‘The People United Will Never Be Defeated: Advocating for Abortion Rights On Campus‘. On 30th March, the Center for Bio-Ethical Reform (CBR) group returned outside the Victoria Gallery and Museum. The pro-life religious group originated in the American bible-belt and claim that abortion is murder.

A spokesperson for CBR stated that they were performing a human rights publication display. In this case, that meant holding up large, intensely graphic images of foetuses and shouting at students. While they were not on University of Liverpool property, they were situated opposite the Guild. Clear attempts were made to verbally attack and harass students. They also wore recording devices, in attempt to plaster students faces on their social media accounts.

Students and advocacy groups from across the city’s three main universities congregated the following day to launch a counter-protest. Societies attended from Liverpool Guild of Students, such as the Decolonise UoL, LGBT+, Feminist, Labour and Politics societies. Current Student Officers and newly elected Student Officers alike showed up in solidarity with students. They were also key in raising the word that CBR were in situ and a counter-protest would be launched.

This was to ensure that the campus remains an inclusive and welcoming environment for all individuals. The gathering advocated for pro-choice; aiming to raise awareness, offer support and cover up the graphic images with pro-choice signs. Many were threatened by the police with arrest, with the ‘force’ being extra forceful. Although, not to support vulnerable young students who were being emotionally traumatised on their own campus, but CBR.

I’d like to believe that every student has the opportunity to vocalise their opinion and be supported. The campus should be safe; a home away from your home. When this is threatened, I expect the staff to get involved. However, as this is public property, the university and Guild have no legal power to remove organisations threatening our stability. The importance of protesting and protecting our fellow students ourselves is, therefore, vital.

What Can You Do?

There is power in numbers; we will continue to ensure we are heard and our university remains a place of security. If you are wary of being in the front line of protests when there is excess scrutiny from police, the threat of being put on blast on social media and a risk to health, there’s other ways you can help.

The societies’ Instagram pages and Liverpool Guild Student Media’s socials will communicate any future protests, should you want to join next time.

If you are affected by this topic and need support, don’t hold it in. If you want to speak to anyone, reach out to your friends or for professional help, contact: