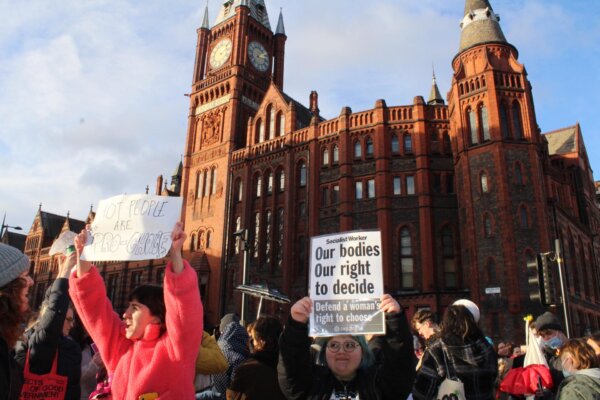 The People United Will Never Be Defeated: Advocating for Abortion Rights On Campus

Trigger warnings: Please note this content discusses abortion. We understand that abortion is a highly contentious topic with religious and societal implications, and has the ability to severely affect individuals. At the end of the article are some links that encourage professional medical advice.

Fundamental human rights have always been a necessity that should belong to every individual. They enable a voice for the powerless, and embody vital aspects like equality, dignity and respect. ‘The Center for Bio-Ethical Reform’ is an American anti-abortion organisation that operates on the principle that abortion represents an inexpressible evil. The group began protesting on campus from November 25th. Students from the University of Liverpool united to advocate pro-choice, and legal access for induced abortion services. This is in an effort to ensure that the campus remains a welcoming and respectful environment for all members.

Consisting of members from the Decolonise UoL, LGBTQ+, Feminist, Labour, and Politics societies, as well as students attending the university, the student-led protest aimed to raise awareness and support to every individual whilst promoting the legal right to abortion services. A spokesperson for the CBR (Center for Bio-Ethical Reform) stated that they were performing a human rights publication display to raise awareness of the humanity of children in the womb and the reality of abortion. They expressed the organisation was taking a non-judgemental, compassionate perspective. This was in addition to saying abortion is genocide, whilst holding up large graphic images of foetuses alongside the Victoria Gallery & Museum opposite the Guild.

A statement from the Guild

We believe the images shared by the group were incredibly harmful and triggering in an attempt to shame those who make the decision to have an abortion, which may include many of our members. In reaction to this University of Liverpool students held a counter protest, promoting the key message of choice; covering up images, distracting organisers, standing in unity and reclaiming our campus. We would like to extend a massive thank you to those who came out in the cold and made sure your voice was heard.

We understand a number of people may have been affected by the messages that these anti-abortionists were sharing. The Guild is here to support you so please contact our advisers at guildadvice@liv.ac.uk

Interviewing a member of the Center for Bio-Ethical Reform

James Porter, a spokesperson for the CBR, expressed reasons as to why they were on public property near the university. These included young people being targeted by the abortion industry and often not knowing the facts surrounding abortion. They therefore aimed to make students aware of such, as well as to engage with them to see their views on anti-abortion. James states that from fertilisation, foetuses are living human beings that have rights, so abortion is a human right violation. He claimed that the students protesting alongside the CBR were covering up the truth and preventing any debate from happening.

The UK centre started 10 years ago and was inspired by the history of social reform movements like the civil rights and anti-slavery movements. Aiming to educate our university students and spark a debate, James remarked that the pro-choice movement initiated by the students of Liverpool were shutting down the debate. When LGSM asked about the graphic images the Center for Bio-Ethical Reform were displaying, James proclaimed that society doesn’t let the discussion around abortion happen so aimed to show a realistic process of abortion happening to the public. To summarise their viewpoint, James said that abortion is the killing of an innocent human being. The group view this as genocide which he cannot empathise with as no situation justifies it.

I’d like to think that every student has the opportunity to vocalise their views and be supported. This is especially the case given that the University of Liverpool is a Russell Group university. The campus should be a place that is secure and safe for every single individual. When this is threatened, I expect the staff to get involved. There is power in numbers and we will continue to ensure we are heard and our university remains a place of dependability.

The controversy at the University Of Exeter

A pro-life society was created at the University of Exeter, another Russell Group university, which faced some backlash. Quoting their website, “the society exists to promote and encourage a culture of life among the students on our university campus at Exeter”. They advocate against abortion, promoting the dignity of human life and striving for its protection. I understand that everyone has freedom of speech. However, when women across the University of Exeter have their safety and wellbeing threatened, it is the university’s responsibility to make sure every individual is safe. This should be the case even if it means not allowing this society to continue.

Interviewing the Vice and Deputy Presidents of the Guild: Jamilia Kwajah-Ellimah and Chloe Field

LSGM asked Jamilia and Chloe about protesting on the university campus. They expressed it was on public property so the Guild could not tell them to leave. However, they did say we can get students together, block out graphic images, and distract the pro-life campaigners. Jamilia acknowledged that the CBR have freedom of speech. However, she reminded students that they have the freedom to counter argue and speak up against them. The Guild takes a pro-choice stance as voted for by the students. However they can’t refuse to fund societies that are pro-life as a charity.

The University of Liverpool students will always have the opportunity to protest against the events that happen. This is because there is strength in numbers. There are multiple services available to keep women safe and informed. The advice service created by the Guild is one such example, as well as the Mental Health and Wellbeing Services. The group emphasised the importance of women supporting each other and following campaigns that aim to create safe spaces. The Student Officers are willing to support students throughout university. They are working with the university continuously to ensure campus and the city centre is safe.

Statements from the University of Liverpool’s societies

“We were proud to help mobilise students to come down and stand together to protest against the anti-abortion group on both Thursday and Friday. We won’t stand for groups who come onto campus and put up posters which can trigger students. Our society will always be pro-choice.”

“We are proud to have been able to attend the first impromptu counter-protest and help mobilise the second against the ‘Pro-Life’ protesters on our campus whose aim was to ‘educate the public on humanity of the unborn child and the reality of abortion’.

We don’t believe anyone should be forced to view graphic distressing imagery and engage in sexist, shaming and triggering conversations anywhere, especially on campus.

As an anti-colonial pro-human rights group we believe strongly in preserving people’s autonomy over their bodies and challenge people and systems that actively hurt and oppress, naturally meaning we are Pro-Choice.”

I think all people should have the right to protest the issues that they are passionate about, however I believe there is a right and proper way to go about it. What incensed me at the protest was the graphic imagery being portrayed. This imagery, even if it was a representation of the reality of abortion (their claim), could be very distressing and triggering to women subjected to it through no choice of their own. This stress caused can, for arguments sake, cause a heavily pregnant woman on her way to the Women’s Hospital enough stress to potentially cause her to miscarry. If the people there yesterday were so pro-life as they claim then they would not put this imagery up for unwilling people to see, risking this possibility. Also, there is a primary school not too far away from where they were protesting.

As I said, there is a way and means of protesting and this is not it. Universal bodily autonomy and access to healthcare should always be more important than an individual’s views on the matter. I would like to emphatically stress that these are my personal views on the matter and nothing to do with the University of Liverpool. I gave you these views on my own personal time.

What can I do?

No one should be denied a human right.

Services available to you