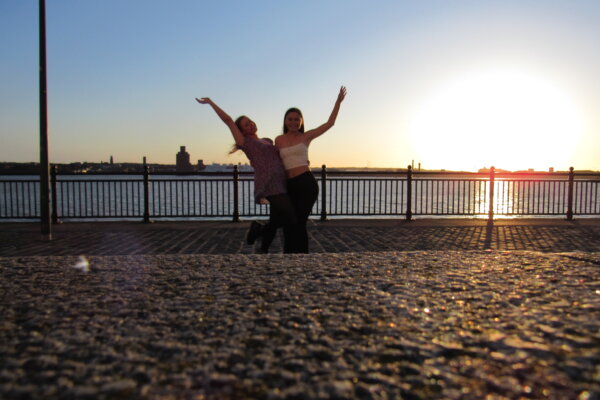 With Women’s History Month drawing to a close, I’ve been thinking a lot about female identity. More particularly: girl power. We’re often viewed as gossipy, drama hungry, and generally out to get each other. Actually, I’ve found that the opposite is true. I’ve always thought that girl power is something that runs deep amongst our community at UoL. No one’s perfect, and obviously we’ve all had our moments that were not the most girl boss-y.

During moments like these, I always think of Deborah Frances-White’s The Guilty Feminist podcast and book. I’m currently reading the book, and each chapter starts with the phrase ‘I’m a feminist but…’, followed by a statement that would typically be regarded as un-feminist. We all probably have at least one thing, whether it’s another girl, an activity or even a state of mind, that makes us think ‘I’m a feminist but…’. Deborah Frances-White’s point is exactly that: feeling like this doesn’t necessarily stop you being a feminist. You can still have principles while accepting that you may fall short in some areas.

To conclude Women’s History Month, I thought I’d share some of the most heart-warming or iconic girl power moments I (or my friends) have experienced.

1. Saving the day with sanitary products

Anyone who’s ever had a period knows what it’s like to be caught in the lurch when it’s your time of the month. Whether it’s started unexpectedly, or you simply forgot to bring any products with you, it’s horrible. In your moment of panic, you’ll have been relieved to find the dispenser in the Sydney Jones toilet. That is until you realise it would cost £1 for any of the products in there. Assuming you have a pound coin on you in the first place, surely this is an unfair price to pay for being crept up on by mother nature. This is what my friend thought when she left some of her own products on top of the dispenser one day, so whoever was caught out next wouldn’t have to fork out. This inspired others to leave more products in the bathroom, creating a little ecosystem of girls supporting girls.

Last week, one of my friends posted a picture on her story of a receipt someone had left in the Sydney Jones toilets, with ‘be the reason why somebody’s day picked up’ jotted on the back. We decided this was yet another example of girl power amongst our student body. I find that the little things like that really stick with me, and act as a reminder that many people support you, whether you know them or not. When I asked if she could send me a picture of the note, my friend also mentioned that she had seen a similar note a few months back (pictured below). The fact she remembered this really shows how something so small can have a huge impact on someone’s mindset.

Back in November, Taylor Swift released a ten-minute version of her heart-breaking song, All Too Well. Gradually, clubs around the world began playing it on the dancefloor. Enough people requested that it be played on the Throwback Thursday floor at Shit Indie Disco (Shindie), that the song became a permanent weekly feature! I finally got to experience this at Shindie in February, shortly after the breakdown of my situationship. I’m not going to lie, it fixed everything. I don’t know how to describe the feeling of screaming the lyrics to the breakup song of the century along with my best friend and loads of other like-minded girls. But I’m telling you now, girl power was flowing around the room!

A year or so ago (pre-second lockdown), I was ranting about something the boy I was seeing had said to my friend in the toilets at MODO. The girl in the cubicle next to me must have heard this dramatic retelling of what had happened. She slipped her phone under the cubicle door, with ‘girl he’s not worth it’ written in the notes app. We ended up chatting to her and her friend and invited them back to our afters so we could get to know them better and introduce them to our friends. Unfortunately, we never saw them again after we left the toilets. So girls, if you’re reading this, do you want to come to my birthday party?!

Side note: she was right about the boy.

5. Supporting each other through boy drama

Throughout university, my friends and I have had our fair share of heartache. A standout moment for me was around this time last year, when I was going through a breakup, and my besties were there for me quite literally night and day. This included making garlic bread for me (even if I couldn’t eat it), watching Angus, Thongs and Perfect Snogging if I was crying at a party, and even letting me stay over all weekend because I couldn’t face going home (I lived with my ex). The girls were there for it all. I don’t know where I would be without my best friends, but I know it wouldn’t be fun.

So, this is quite a simple but niche girl power moment. One day, my friend Annabelle decided that she could cut people’s hair. She soon became the hairdresser of the house, and ‘Annabelle’s Salon’ was born. Fast forward a few months, and we’re all visiting her room to get our hair done before every night out, if we need a trim, or even if we want it dyed! In the ultimate girl boss move, Annabelle became the group’s hairstylist alongside her marketing degree!

7. An ecosystem built in girl power

In our house, we have what we’ve started calling ‘the ecosystem’. This just refers to the happy little life we’ve created, that just works. From our big cleaning nights that are made fun, to the way we (mostly) manage to keep the tea towels in a constant rotation of cleanliness, even to our collaborative Spotify playlists bringing all the girl power vibes, we thrive. You might be tentative living with all your besties in case it’s too intense but, somehow, our ecosystem overcomes this.

Last year, my two friends Annabelle and Erin planned a marathon walk around Liverpool for a charity close to us. Among us all, we managed to raise over £2,000 in a few weeks! The walk itself was a lot more intense than we thought it would be. However, with a bit of girl power and a few snacks we made it back home in one piece. Although a gruelling day (lunch outside Anfield Stadium in the pouring rain was a low point), we now look back on the day with some of the funniest memories and pride at how we came together as a girl gang to achieve something really special.

So now that I’ve basically just gushed about my friends to the whole world, I hope you’re reminded of the girl power we all experience at university. In fact, the girl power throughout life in general. To me, feminism isn’t just one solid concept, but I think it can be found in small moments of girl power such as these.

Catch up on some of our Women’s History Month Articles here!