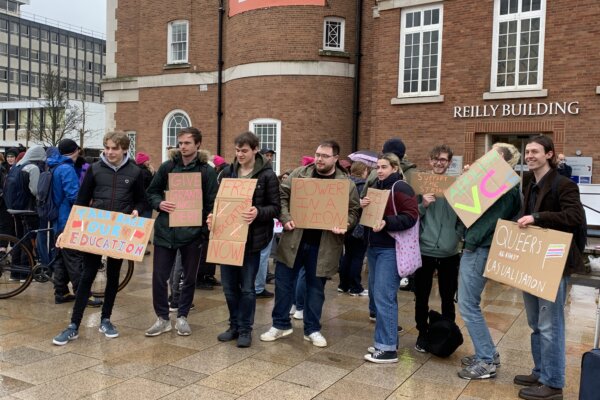 Education for all: Stories from the Strike’s Picket Line

Yesterday, Bryony’s article gave a run down of the student-led strike! Today, the National Union of Students (NUS) held their, ‘Student Strike for Education: Walk Out Teach’. Students from University of Liverpool took part, with the support of the Liverpool Guild of Students and our current student officers.

I headed to the rally on University Square to speak to society leaders, members of staff and union members about the changes the want to see at the university.

Why has This Happened?

Members of student society People and Planet voiced that university should remain accessible to all, not for the privileged few. The fees for tertiary education act as a barrier to lifelong learning.

Staff raised the view that they aren’t being paid equally or fairly and are not being properly supported. Their belief was, if one staff member alone earns over £410,000 a year, the university can afford to adequately compensate the rest of its staff. This would fall in line with university claims of focus on wellbeing and mental health.

It follows the logic of higher education; the university profits from grants and student fees whilst cutting staff numbers yet increasing the amount of students. It follows after the cut of the block grant in 2010 that funded higher education.

What are People Striking For?

Abbie, a University and College Union (UCU) member and PHD student, conveyed that the university’s standing should be based on equality and justice not league tables. She was striking because that’s how she believes the university should value itself too. Instead, casual contracts force staff to work extra hours, marking and planning, for free. She suggested that is leading them not only to burn out but be unable to get homes and have children. Her thoughts were echoed by others who I spoke to.

From 2014 to 2019, there has been a 31% increase in university students but only a 15% increase in staff. This causes staff to be stretched thin. They have little time to prepare for courses, resulting in poor learning conditions.

Anti-casualisation claims have been submitted to the university, yet there has been no correspondence [from them]. 40% of staff are on casual contracts, starting from 2 months to 2 years, which causes low job security.

The strike unites staff and students to show the impact of marketisation of education and the demand for change.

We need to strike because the university staff’s future is our future. We need to unite.

Solidarity for staff reflects our learning conditions. The university should ban zero hour and casual contracts and instead fund mental health services.

Will Jones (University of Liverpool student)

What do They Want for the Future?

We want a minimum contract length of 2 years for research staff and no casualisation. If Lancaster university have already implemented this, why can’t every university?

What can you do to Help?

You can support your educators and other educational support staff at the university! Here’s several things you can do to help