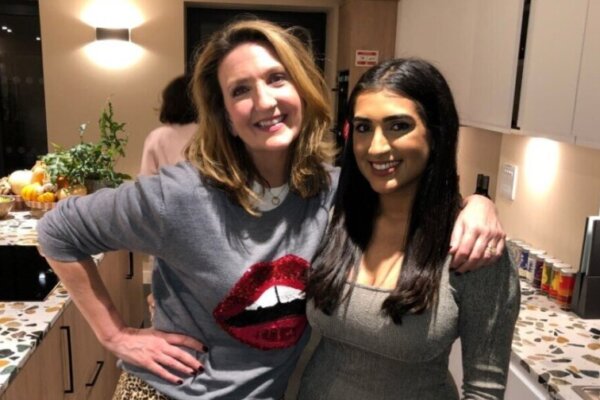 I was lucky enough to sit down with one of the nation’s favourite journalists, Victoria Derbyshire. Having met the BBC newsreader around one month ago, at a Women in Journalism breast cancer charity event, I managed to pluck up the courage to approach her, despite being very starstruck, and I’m so glad that I did!

After a couple of glasses of rosé, which I later found was her drink of choice, we bonded over life in Smithdown and the tragic closure of Carnatic Halls of Residence back in 2019, where she once resided. How crazy is it to think THE Victoria Derbyshire used to get drunk in the same flats we did?!

Still in contact with her university friends after decades, her favourite pastime is, “getting drunk and dancing on tables with my friends.” What a relatable queen! In fact, her favourite Liverpool bar is Pilgrim. I’ll admit, it’s not one I am personally acquainted with. However, her review’s left me eager to check them out when they’ve relocated.

Living off Smithdown road, she used to be a Brookie regular, recollecting her times there when I mentioned it. She had “the best time”, living next door to The La’s, quipping that I’d be too young to know the band. Describing them as “up-and-coming at the time”, they found mainstream success in their hit song ‘There She Goes.’ She joked she should have interviewed the band as a student but it’s not like she’s unsuccessful as a consequence.

Surprisingly, her ‘family never paid much attention to the news’ while she was growing up. For her own kids, however, things are slightly different, “they are SO aware of what’s going on in the world”. Although that’s hardly shocking as “both of their parents are journalists”, she uttered. She revealed that she used to write for the university paper, just like me. If that doesn’t inspire you, the fact she’s a northern woman who has unequivocally made it in the media should.

It was only once she started university and introduced to student media that she considered a career in it. She says she wrote “just book and film reviews”. While casually glossing over the fact that she interviewed Cathy Tyson (Simone in Mona Lisa) at the famous Everyman Theatre. Ironically, she felt starstruck when interviewing her, just as I felt throughout our interview. Oh, how the tables turned Victoria! Although, she made me feel very comfortable – like I was speaking to a mate. I think that’s part of her charm.

She did admit that she wasn’t too fond of writing whilst at the paper, and “knew nothing about politics”. So, if you think journalism’s for you, don’t worry if you don’t know every MP!  Would you believe me if I told you Victoria got her start at the (pirate) radio station Toxteth Community Radio? An experience she humbly describes as “doing radio in a dodgy guy’s house.”

I aimed to not bombard her with questions she’s bored to death of answering. However, it was only natural for me to delve deeply into her line of work. As a public figure, I knew the basics but I wanted to use this opportunity to ask her what she believes are the biggest issues in journalism today. She expressed ambivalent feelings about citizen journalism.

She likes the ‘democratisation of journalism’, which I thought was a nice way to put it. The rise of the youth-led platform TikTok has led to increases in “news that’s not accurate”. While she herself has amassed a huge following there, she finds it worrying. She stressed, “in a world of fake news, it becomes even more important that the sources that people follow are trustworthy”. We discussed the danger in relation to anti-vax conspiracies and it makes sense. I know that my 12-year-old self certainly wasn’t listening to Newscast as religiously as she does today.

My first question, on the difficulties of remaining impartial, is one that concerns reporting grave issues. As an inexperienced student, I don’t know how she can discuss rape and sexual assault claims without giving her emotions away. “It’s completely normal, I’ve done it for so long,” says cool, calm and collected Derbyshire. Given that “there’s not that much for people to disagree with”, when you’re contractually not allowed to articulate your own opinions. She has covered, “many contentious issues like abortion and trans rights”, yet no one knows her own opinions. She says she very much enjoys this and I can see why she enjoys the privacy it affords her.

Having built an expansive portfolio over the years, she chooses her work very intentionally. I gathered this from hearing her speak at the event where we first met. Opening up about her breast cancer diagnosis, she sparked the early detection of cancer amongst thousands of women, even regularly checking in with them. She spoke of her affection for phone-in radio shows, often keeping in touch with fellow breast cancer survivors. This is what I love about Victoria; she uses her raw honesty and openness to uplift women when she is under no obligation to. Cancer is known to be a very debilitating and personal illness – sharing pictures in her hospital bed created a safe space for women everywhere.

In addition to her routine poker face, she goes as far as saying that she, “loves that the BBC is impartial, as it breeds accurate news stories, and it allows [her] to be an ‘honest broker’ when interviewing the big dogs ‘from any particular party.” Extremely relatable, she disclosed she still gets nervous when interviewing important people. Even likening speaking to members of the UK cabinet to being, “like an exam”, having to memorise so many policies.

Being on national television so often must come with its stresses. It’s nice to know that she’s a sentient human just like us, who slips up from time to time. She has a lot of integrity, proudly proclaiming that she’s not pally with politicians and doesn’t “live in that world”. Impressively, she generally manages to escape trolling but suggests, “maybe people don’t want to be mean,” following her cancer diagnosis. She’s receptive to viewers’ opinions and always willing to engage in a polite discussion with them. A sweet notion given her 100k followers on Instagram alone. This makes me even more grateful that she replied to me, a mere student, on social media. To her, the exchange must be useless, I have nothing to offer her. So it’s nice to experience how helpful and insightful she is, in such a closed off industry.

I asked Victoria if she felt like she faced hurdles her male colleagues didn’t, in the field of journalism. To my surprise, she said “no, not really”. Reluctant to call her experiences sexist, she claimed they were, “no big shakes compared to what other women have faced”. Maybe this points to a wider problem in the industry. Her confidence has helped her, but even Victoria Derbyshire is not exempt from, “what you might call sexist experiences”.

She relayed to me that at BBC Radio 5 Live, the breakfast show’s, “producer would always gravitate towards the bloke to talk to them about the upcoming sports interview”. It was sad to hear that, “you have to pluck up the courage” to prove yourself to the men in the newsroom. Though she confidently asserted that, “once you show that you do know your shit, it’s fine!’ Her resilience is remarkable but as women, we shouldn’t have to go the extra mile to read a sports bulletin.

Luckily, she is convinced that this, “wouldn’t happen today,” as it was in the “late nineties.” Whilst she feels, “strides are being made with equal pay and racial diversity,” she acknowledges, “broadcasting is populated by middle-class people,” including herself. She has hopes of a ‘working-class recruitment revolution, saying the BBC, “has to represent the whole country,” although it currently doesn’t.

As a fellow northerner, I asked if she felt that she had to adopt a southern twang. She did try to sound, “posher for a few months,” after which she decided to embrace her Lancashire origins. She feels that it was more, “pressure that I put on myself,” than from media executives. “When you don’t see people who look or sound like you on TV,” you’re not going to feel represented.

It is amazing to hear how far she has come; from her humble beginnings writing at the Liverpool University paper to presenting Newsnight, the nation’s favourite current affairs show. Definitely not the product of media nepotism, Derbyshire discovered her passion for broadcasting whilst an English student here, at the University of Liverpool. It’s reassuring that I too, a Liverpool English student, can succeed as a journalist. Let this motivate you to write more articles!

She made me feel better for the days when I am not 100% on top of the news, modestly remarking that as a student journalist she was “clueless”. An inspiration for female journalists everywhere, Victoria shows us that we can do it too.