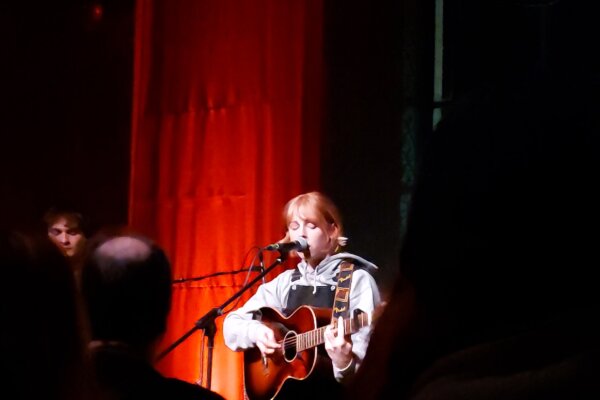 Fenne Lily’s performance at Leaf on Bold Street was a warm retreat from the snow on Sunday evening. With an energetic band to balance out her calm vocals, though a largely slow-paced discography, people still found a way to have a dance.

Her voice was deep and rich, despite Lily’s confession to shouting until 6 am after a wild show in Bristol as an explanation of why James, the drummer, would be singing the higher harmony on ‘I Used To Hate My Body, But Now I Just Hate You’.

The gig had a relaxed tone with comfy sofas to one side and the artists joined the audience whilst each other performed. The lights of Bold Street through the curved glass panes of Leaf’s first floor were a beautiful backdrop for the opening act, Sara Wolff. Wolff’s vocals were fresh, smooth, and perfectly accompanied by her backing singer. Her set was jazzy and folky with ‘Scarf Song’, ‘Cotton Socks’ and a clever-sounding clapping section being the highlights for me.

The second support was Katie Malco, who charmed the audience with her humorous stories about getting into a fight at a karaoke and listening to the radio whilst driving to Liverpool through the snow. Her witty way with words continued through her songs Fractures and Brooklyn.

When Fenne Lily first came on stage, I wondered how her band would interpret her folky style. However, as a fan of Lily, it was exciting for me to hear heavier instrumental versions of her songs, which was especially successful in ‘Laundry and Jet Lag’ and ‘On Hold’.

The band left the stage and pockets of the audience sang along as the heavier sound was concluded by the encore, ‘Bud’. As much as the audience in Leaf had warmed up the room, Liverpool had warmed the spirits of the performers, with Lily saying we’d cheered her evening up.

Lily’s website describes her 2020 album BREACH as a “diaristic, frequently sardonic record that deals with the mess and the catharsis of entering your 20s and finding peace while being alone”, so perhaps the perfect soundtrack to your reflections on lockdown and university life.

You can listen to Fenne Lily’s albums, BREACH and On Hold here and for or more concert reviews check out Naomi’s article here.