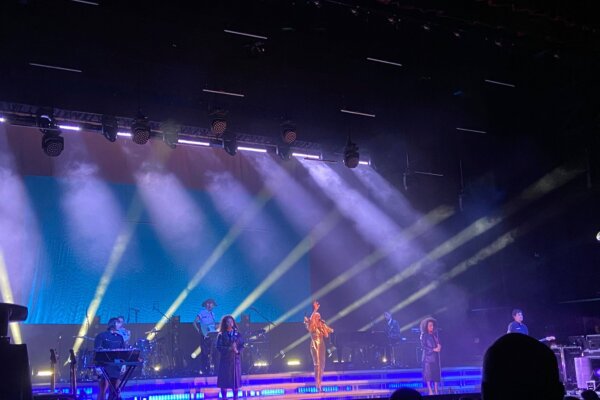 Ironically, for someone who numbers the single ‘Stone Cold Sober’ among her hits, singer Paloma Faith shares her name with a cocktail. The Paloma is part tequila, part grapefruit soda, part lime juice. The other Paloma is part The Voice UK judge, part Pennyworth super-villain, part feminist icon and part pop superstar. (Or, as her Twitter bio would more humbly have it, ‘singin n dancin n actin innit’). So, how does the sometime scarlet-haired songstress measure up to a glass of the pink fizzy stuff? LGSM contributor NAOMI ADAM went along to the final date of her latest ‘Infinite Things’ tour to find out…

Ignore those cognitive linguists (yes, we’re looking at you, Lakoff and Johnson), height doesn’t necessarily always equate to power. Pint-sized popstar Paloma strode on stage to the strains of her opening number, ‘Last Night on Earth’ and immediately commanded her seated audience’s attention. This was due in no small part to her incredible vocal range, as she swooped from the upper octaves to a sultry mezzo-alto sass before the track’s four-minute run-time was out.

No time for a breather there, though; instead it was straight into another of her latest hits, ‘Gold’, to showcase her signature semi-spoken ‘Cock-a-nee’ runs. This was an epithet from the lady herself, as she coyly admitted to being born within the sound of the bells – in Hackney, no less, ‘a place they keep out of the tourist books!’. Her heritage proved pretty helpful here, though, allowing a gag about ‘the ol’ Joanna’ to segue into a piano-accompanied medley of the (many) classics from her back-catalogue. Think ’30 Minute Love Affair’ married with ‘Upside Down’, by way of ‘New York’.

Truncating all these tracks was a clever way to offer a smorgasbord of song from across Paloma’s decade-plus, five-albums-and-counting musical career. Nonetheless, more recent tunes crowded the set list. Justifying the tour’s title, eight tracks from Paloma’s 2020 album, Infinite Things, featured. This skewing meant that a couple of the classics were missed (where was ‘Make Your Own Kind of Music’?) but ensured she remained very much on message. Meanwhile, her rendition of ‘I’m Every Woman’ arguably trumped the original. Three cheers for Girl Power: boom boom Chaka the room!

Musical Chairs: Paloma serenades a rapt audience from atop a piano

Never knowingly underdressed, the night’s outfit of choice was a form-fitting gold lamé cocktail dress, featuring Snow White-style puff sleeves and a train long enough to make even Meghan Markle envious. Big enough to make the dancin’ promised in her Twitter bio a bit of a difficulty; armography, instead, was very much in evidence.

Still, the dress shone beautifully under the stage lights, its ingenious iridescent reflectiveness obviating the need for multiple costume changes. Her sole frock was a surprise, certainly, but all the better for us audience members: less time spent buttoning up backstage meant all the more time spent belting out bangers on-stage.

The set was similarly minimalist (especially from an artist who, in the past, held highly conceptual shows, known to feature fish guts spewing out of false pregnancy bellies). Gauzy curtains provided a blank canvas backdrop for stage lighting projection, whilst proving flimsy enough to be torn down by Paloma mid-song in a carefully choreographed display of mock ire. Watch out set designers: she’s after your jobs!

At times, the concert felt just as much ‘An Evening with… Paloma’ as a musical performance. Or perhaps simply an evening down the local ’Spoons (obligatory Paloma cocktail firmly in hand). A fair proportion of the gig’s pie-chart was given over to nattering: Paloma has perfected the art of the irreverent conversation with an audience of thousands that feels like an intimate one-to-one. She shared everything from her morning schedule to an unfiltered assessment of the size of Craig David’s ego. (Yes, she did Fill Me In.) Coupled with this came some industry insights along with a fair few name drops. Yes, your girl Paloma (rocks and) rolls with musical royalty (i.e. Prince)!

Paloma & Pals: The singer was flanked by her backing vocalists for several ballads

Judging by her between-song banter, Paloma is suffering under some stress in her personal life. The organisation of a nationwide concert tour can’t have lightened the load any, either. Just before stepping onto the Empire’s stage for her final show, she posted the following on Twitter:

This tour has been one of the biggest emotional rollercoasters of my life. So much has happened behind the scenes that at times have felt too much to bear [sic]. But somehow everyone showed up.

As did Paloma, with a sparkling 90-minute set, and a generous encore of not one, but three, tracks (she loves the adulation surrounding the encore; she’s self-diagnosed as ‘needy’). Now for some well-deserved R&R, Ms. Faith (if the eight-month-old allows!). Time to put your feet up with a tequila-laced tipple. Paloma, anyone?

Paloma tours next with ‘The Age of Optimism’ Summer 2021 Tour, beginning at Edinburgh’s Usher Hall on 2 June. For tickets or more information, visit www.palomafaith.com/live.

Tequila Songbird: ‘Only Love Can Hurt Like This’, Paloma Faith @ Liverpool Empire