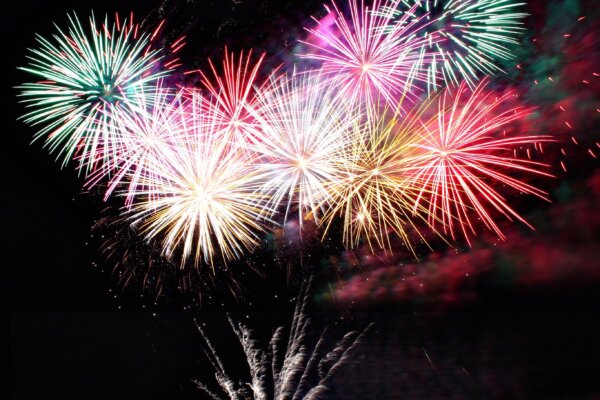 Fireworks Night – What’s it all About?

As an International Student, you may not have heard of the celebration of Fireworks Night. Otherwise known as Guy Fawkes Night or Bonfire Night, the event is celebrated every year on 5th November. Now used as an excuse to come together, eat food and set things on fire, it has a dark past.

Who was Guy Fawkes?

Guy (or Guido) Fawkes was from York and was born around 1570. He was born a Protestant Christian and converted to become a Catholic Christian when his mother remarried. As such, he left the heavily Protestant England to fight with the Spanish Catholics in the Eighty Years War. He returned to England with a deep hatred for the Protestant King James I. Then met with Robert Catesby, who was intent on assassinating the king and his closest allies.

He played the most crucial part in the Gunpowder Plot – and failed miserably. Sentenced to be hung, drawn, and quartered (it was grim so check it out at your own leisure!) for treason, he threw himself to his death to avoid the horrific execution.

What was the Gunpowder Plot?

The Gunpowder Plot marks the events of 5th November 1605. Guy Fawkes was amongst a group of co-conspirators who, having rented a place near the Houses of Parliament, had smuggled 36 barrels of gunpowder into a cellar below the House of Lords. This would be enough to blow up the entirety of the building and severely damage several others. Unfortunately for Guy, someone had spilled the plans and alerted authorities to check the cellar, where they found him and caught him red-handed before he could light the powder. This foiled one of the earliest acts of terrorism.

Remember, Remember, the Fifth of November

Remember, remember, the fifth of November,

I see no reason,

Should ever be forgot.

To blow up the King and the Parliament.

Three score barrels of powder below,

By God’s providence he was catch’d,

With a dark lantern and burning match.

God save the King!

How do we Celebrate?

Since the times of the Pagans, folk in Britain had been burning effigies on fires to ward off evil spirits. After the Gunpowder Plot, however, these effigies become Guy Fawkes. Children made them and dragged them through the street (resembling the drawing of those who were hung, drawn, and quartered), asking for a ‘penny for the guy’. The burning of a guy happens to this day! As modern bonfire nights evolved, we included fireworks and sparklers and it became a celebration.

Why is it Under Fire (Pun Intended)?

Fireworks are used worldwide for celebrations, however, they are toxic, in the most literal sense. The chemical reactions in fireworks release smoke and gases such as carbon dioxide, carbon monoxide, and nitrogen, which are some of the primary greenhouse gases. They directly contribute to climate change.

The metal atoms from the explosion don’t just blow up and end up as aerosols that poison the air, water, and soil. When inhaled or ingested, they can cause a huge variety of reactions. Firstly, short-term like vomiting, diarrhoea, and asthma attacks. Secondly, long-term like kidney disease, cardiotoxic effects, and a variety of cancers.

They are also seriously dangerous for humans and animals alike. Even a sparkler reaches a temperature of up to 2,000°C. That is 20 times the boiling point of water! Fire crews dealing with incidents are regularly attacked when trying to get fires under control. It is one of the worst things for those suffering from PTSD and while people commonly associate PTSD with those who have been in war zones, it can also be people who have been in abusive households or have been involved in an accident. 85% of people think public firework displays should be licensed, with 62% of dogs, 54% of cats, and 55% of horses suffering under the stress of fireworks. Last year one woman cradled her horse in her arms as she died after breaking her spine because of fireworks and in 2019 a horse was impaled on a fence post.

How to Celebrate Without Havoc

Most people nowadays aren’t celebrating the downfall of a plot to kill the monarchy. They are just coming together to enjoy the fireworks with their community. So why not enjoy the night with fireworks which are made specially to be more environmentally friendly or create less noise? Alternative celebrations now also feature light shows from drones, like the 2021 new year celebration in London which featured 300 drones from SKYMAGIC. You could also have an intimate and cosy night at home with your besties, a glass of wine, and a cute firepit!

Cover Photo by Anna-Louise from Pexels