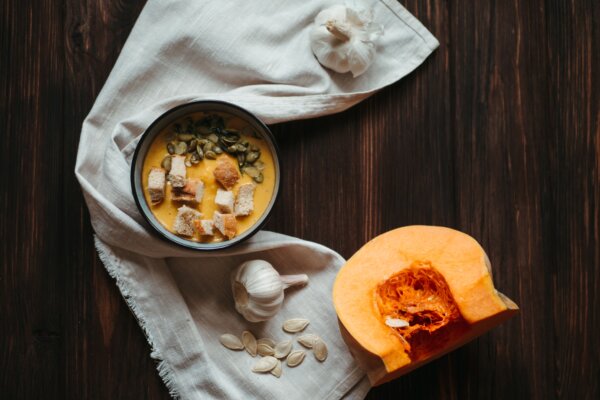 It’s autumn- what else is there to do but make all things pumpkin?

If you’re wondering what to do with that carved out pumpkin (before it goes Robbie rotten of course) and want to procrastinate those autumnal assignments as much as possible, then here’s some ideas!

I’ve made this for 2 years running now and it is so tasty, so cheap and makes like 1000 portions.

I followed the BBC goodfood recipe which makes 6 portions, as I had about 50kg of pumpkin to use up and several housemate-mouths to feed, I doubled the recipe. Leftovers were tubbed up and frozen to last the rest of the autumn period.

1kg pumpkin or squash- peeled, deseeded and chopped into chunks

So, making the soup is actually super easy as there aren’t many ingredients. First, you need to soften the chopped-up pumpkin in the pan with some oil, then add the stock and simmer the pumpkin for a further 10 minutes. I found doubling the recipe doubled the time of the pumpkin to soften so just keep this in mind if you’re cooking for a large group. Then the yummy cream goes in- blend it all up with a hand blender (not a smoothie machine- I can tell you from my own experience that they do not like hot liquids) and its ready to go!

Serve with a crusty roll, or an oven baked baguette to soak up the soup!

If you want to finesse your dish then add some

Alternatively, if you’re not so much of a fan of creamy soups, then you can use chopped tomatoes instead of cream. This is also a healthier option and can counter the strong pumpkin taste for those of you who are not pumpkin lovers!

Student-life tip: Double the recipe if you have more pumpkin to use up. Freeze the extra portions- they’ll come in handy when you’re bogged down with revision on a cold evening and can’t be bothered trekking to Aldi for dinner.

The muffins are also so easy and a tasty way to use up the last bit of pumpkin. For these I also used a BBC goodfood recipe.

200g pumpkin purée – this is made similarly to the soup’s first step. Soften some pumpkin in a steamer (I just used a collinder over a pan of boiling water) and then blend/mash once ready.

Mix the flour, baking powder, cinnamon and both sugars and mix together. The whisk the puree, butter and eggs together and add to the dry ingredients bowl.

Bake for 15 mins until golden! Mmm I can literally smell the warm cinnamon muffins just thinking about them

Alternatively, if you’re not a fan of cinnamon- there are recipes that use other things that go well with pumpkin such as raisins or orange zest.

Student-life tip: If you can’t afford the muffin cases, bake the muffins as one big cake in a deep oven tray/glass dish. I did this and iced the cake with cream cheese frosting- it was so good!

Some other honourable mentions…

Lush’s pumpkin spice soap this year is AMAZING. Every time I use it, it literally makes my whole bathroom smell so so good.

A bar of it cost me £5 which can seem pretty pricey for a student! But I always cut mine into little cubes to savour the soap as much as possible and to save it getting washed away on the sink.

Also Lush is an ethical an cruelty free brand so buying this product is a win-win situation!

Starbuck’s pumpkin spice latte’s never disappoint. However, if the price is too steep for your student budget or you don’t want to support a big business, then why not make your own! If you’ve tried the soup and muffins and still can’t get enough pumpkin, then try out our easy pumpkin spice syrup recipe.