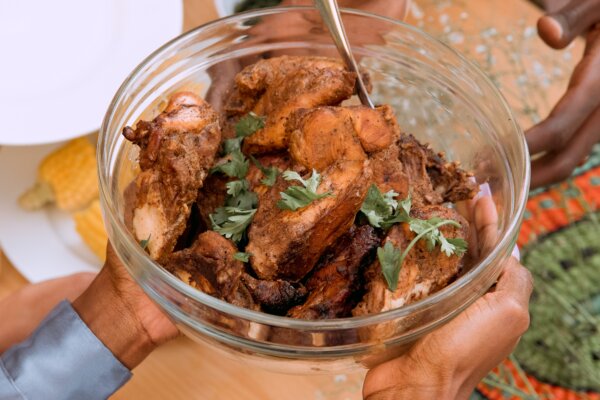 I love food. Everyone loves food. There is nothing better when you are feeling down or homesick than to make a hearty, warming dish that reminds you of home! For a lot of students this is food that they have had since they were young, something that reminds them of family and community.

For me, the first I knew of black food was while watching Dragons Den, with the introduction of Levi Roots. Keith Graham, who performs under the stage name Levi Roots, was born in Jamaica and was raised there by his grandmother after his parents moved to the UK. She taught him to cook, and in 2007, he appeared on Dragons Den, singing about his Reggae Reggae sauce and walked away with an investment of £50,000. Now he courts prime ministers, mentors and teaches and has had his own TV series and books about Caribbean food!

Why is Black Food on the Rise?

In the UK we often pop out for a quick takeaway, especially as students. While there are a lot of fish and chips, pizza and kebabs, people are most likely (especially when they are drunk!) to opt for Chinese or Indian food. Now more people are fighting to get African and Afro-Caribbean cuisine in the spotlight.

One such person is Bryant Terry. An award-winning author and chef, who focuses on plant-based staples. His new book Black Food is a statement in activism, investigating African and Afro-Caribbean food. With Imani Perry, Professor of African American Studies at Princeton University, saying it, “tells a global story of creativity, endurance, and imagination that was sustained in the face of dispersal, displacement, and oppression.” He says, in the introduction, that it was written in, “gratitude to the great chain of Black lives, and to all the sustaining ingredients and nourishing traditions they carried and remembered.”

Loads of African meals are easy to make in large quantities with cheap ingredients – perfect for students! There are also plenty of meals which are vegetarian and vegan.

International Business student, Jessica Ugwe, reflected that she hopes more people take the time to explore the full range of African and Afro-Carribean food. In her home country of Nigeria, there’s an estimated 250 different ethnic groups. She believes that this can make it harder for their food to garner momentum.

When you consider the whole of Africa, then it runs into thousands, all with different languages, beliefs, customs and traditions. This makes it sometimes difficult to promote unity across all fronts but in all these, the beauty lays in the diversification.

I spoke to Jessica about what Nigerian food stands out for her, as the perfect food from home.

My favourite food would be Jollof rice, fried plantain and chicken. This meal is made from basic ingredients found in most places in the world but the preparation method is what makes is standout. Also it’s very easy, quick and affordable to cook (costs less than £10 for a pot full). The recipes can be found easily on the internet and thankfully, there are so many videos too!

As second and third generation immigrants are finding ways to make their home food seem more gourmet, their styles have been combined, to make it appealing to more people.

Hannah’s family enjoy Caribbean food! She let us know what she is missing from home, as she is on study abroad in Toronto, Canada.

Rice and peas! My dad makes it so nice, especially with jerk vegetables!

You can find an easy, 25 minute Rice and Peas recipe from Anna Glover here!

One of the featured recipes in Black Food is for Sweet Potato Leaves. Contributed by Betty Vandy, the powerhouse behind Bettylicious Cooks and Gather at the Table! She recently won micro-funding (you can see our article about Liverpool SOUP here!) for a social enterprise teaching vulnerable and marginalised women in Liverpool how to cook African cuisine. This follows her 18 months travelling across Nigeria, Ghana, Liberia, Ivory Coast & Sierra Leone, exploring West African food and flavours – which she will soon be releasing her own book about!

Betty often works in conjunction with local food & arts community organisation Squash. Keep an eye on their socials for her next cook-along event, so you can learn how to cook her fab recipes and ask about her experience. You should also check out Granby Street Market, which runs on the first Saturday of every month. You can find lots of stalls, grab some treasures and experience great food!

For restaurants you can take a look at Red Sea for Ethiopian and Eritrean food or Raggas for Caribbean food!

Cover Photo by PICHA from Pexels