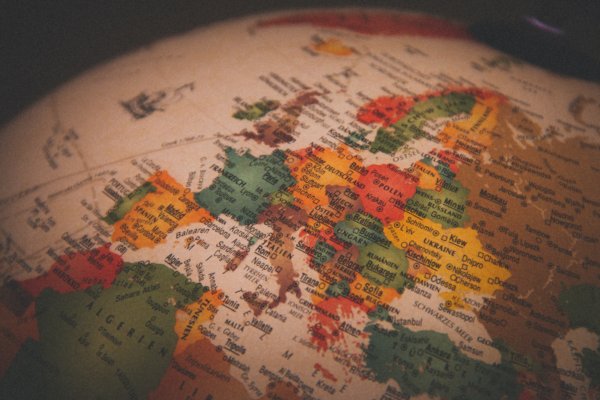 Get your fix of foreign climes from the comfort of your couch with these five Continent-set reads.

‘Reading is a discount ticket to everywhere.’ ~ Mary Schmich.

This year, courtesy of Covid-19, summer holidays were scaled back. Around 14 million of us selected to staycation on our own small island. For even more of us, curtailed by recently-imposed lockdown restrictions, the holiday season saw less Continental bed & breakfasts than Continental breakfasts in bed (okay, a stale, yellow-stickered M&S croissant flaking over our pyjamas, eaten after waking at three in the afternoon). Meanwhile, the British sunshine can be a capricious mistress. (That Ambre Soleil you ever-so-hopefully bought back in May is still skulking in the cupboard, isn’t it? Meanwhile, your scarves and gloves are making a welcome return from the recesses of your wardrobe…)

Fear not! ‘Reading is a discount ticket to everywhere,’ as journalist Mary Schmich would assure you (she would also implore you to ‘Wear Sunscreen…’) So (skim)read on for suggestions of how to get your fix of foreign climes from the comfort of your couch. Cheated this year of our rightful vacays, we can still find adventure between the covers of a book. The five Continent-set books below can transport you to Berlin’s teeming centre, the burnished beaches of the Riviera, or the quaint cobbles of a seventeenth-century Brouwersgracht. Plus there’s *spoiler alert* murder, mystery, and meaty midday snacks… all for the R.R.P. of around £7.99.

For those of you whose tastes run more to telenovelas than novellas, appended are ‘Boxset not book’ viewing suggestions sharing settings: some summer streaming awaits! After all, books and boxsets trump boarding queues any day…

More sunshine than you can shake a French stick at: The French Riviera, setting for Riviera and Bonjour Tristesse.

With cocktail(-emblazoned book cover) in hand, head to beach (yourself upon the sofa)!

If you fancy a trip across the channel, look no further than summertime classic Bonjour Tristesse, by Francoise Sagan, penned and published when the author was just eighteen. The novel’s a little like a piece of tarte au citron: a snapshot (97 page) slice of French summer life; chic, certainly, a sunny, but often disposed to bitterness. This comes courtesy of Cecile, protagonist and enfant terrible, who has been spending her summer swanning around the Cannes coast with pere terrible and self- styled ‘Don Juan,’ Raymond. Yet when their holiday of sunset aperitifs and hedonistic hijinks is interrupted by the arrival of Anne- a staid, soon-to-be stepmother with instructions of study- Cecile knows she must intervene. But with the plan she concocts, her father’s love-life proves not the only casualty.

The prose of this slender, sun-soaked volume is entrancing in its languorousness. (Even their local is called the ‘Bar du Soleil.’) ‘I was nailed to the sand by all the forces of summer,’ Cecile claims at one stage. Their rented villa sounds idyllic:

‘It was remote and beautiful, and stood on a promontory dominating the sea, hidden from the road by a pine-wood; a mule path led down to a tiny creek where the sea lapped again rust-coloured rocks.’

Despite the picturesqueness, the trip proves to be no bon voyage; part of the interest of the book is the myriad ways the slightly older narrator tries to excuse her past behaviour. Fully three-dimensional, Cecile is both lovable and loathable for her flaws. She’s scathingly funny, too:

‘Usually I avoided university students, whom I considered rough, and only interested in themselves and their own problems, which they dramatised, or used as an excuse for their boredom.’

From book to boxset! If you enjoy this, you may also enjoy: Riviera (Sky One/Sky Boxsets).

Stylish modern-day Riviera capers, starring Julia Stiles, a great theme tune, and some beautiful dresses (the scenery’s not bad, either).

Perhaps not a novel the Italian tourist board would endorse, given how sinisterly it portrays the locals. Maybe that’s why the exact setting remains nameless in this early-career thriller from McEwan- although it is pretty obvious the backdrop’s Venice. (‘[C]rowds swarmed across the canal bridges and down every narrow street […] visiting its major and minor churches, its museums and palaces […] A salty wind blew.’)

Later-life lovers Colin and Mary decamp for a family-free vacay in fair Veneto. Something lost in their relationship is reinvigorated by a chance encounter with a local, Robert, and the friendship that forms between the trio and Robert’s tragically disabled wife, Mary. Yet it soon transpires that Robert has a past murkier than the surrounding Venetian waterways, and can be just as treacherous if the couple get in too deep.

Comes recommended for its creeping sense of dread, which makes page turning as addictive as antipasti eating. There’s also a brilliantly relatable set-piece about the difficulties of finding a decently-priced bottle of water when you’re abroad and throat-achingly thirsty. Plus there’s some pertinent social critique of a Mediterranean ‘machismo’ culture going on too, involving some particularly sinister store-window mannequins.

Meanwhile, if you want a further reason to celebrate staying at home, may I direct you to The Comfort of Stranger’s epigraph (for which Cesare Pavese is to thank): ‘Travelling is a brutality. It forces you to trust strangers and to lose sight of all that familiar comfort of home and friends.’

When [not] in Rome… watch Suburro; Netflix recently launched this pacey expose of political and criminal corruption, their first Italian-language drama, for your viewing pleasure. Expect dodgy dealings aplenty.

A title fit for a summer barbeque, and a perfectly-proportioned 217 pages fit for a back pocket. Indeed, the book has been proclaimed a ‘small, perfect feast’ by Kirkus Reviews. (Either way, it works as a substitute to visiting the Deutsches Currywurst Museum, sadly closed since December 2018.) The novel centres around the efforts of an investigative journalist to discover the origins of his chow of choice: the German street stall snack, Currywurst (curried sausage). In what amounts to a Who Do You Think You Are? for charcuterie, the sausage links modern- day Munich with inter- and post-war Hamburg. Most intriguingly, throughout it’s unclear where fact ends and fiction begins (is Timm both author and narrator? Is his sausage sleuthing real?)- much like with the claims of own-brand tinned sausages to contain any actual meat.

Further investigations Teutonic-style, set during German’s next (Cold) war, and this time with not sausage recipes but nuclear secrets at stake. It also features some big ’Eighties hits played on even bigger ‘portable’(?) Walkmans. Time to get wavy with the Neue Deutsche Welle…

Before his tragic death in June of this year, author Zafon professed to most admiring ‘the grand sagas with characters that stay rolling round in the reader’s mind.’ It just so happens he managed to write one, too. With over 15 million copies shifted to date, it’s one of the biggest sellers of all time.

‘We walked through the streets of a Barcelona trapped beneath ashen skies as dawn poured over Rambla Santa Maria in a wreath of liquid copper. […] The lamps along the Ramblas marked out an avenue in the early-morning haze as the city awoke, like a watercolour slowly coming to life.’

So begins La Sombra del Viente, or The Shadow of the Wind (2004), the first of a quartet of books by the author set in his native city, the Catalan capital. Follow narrator Daniel by foot and funicular through the alleys, nooks and crannies of a gothic Barcelona far from the beach front tourism, as he struggles to reconcile reality and fantasy. Between his bedroom curtains one right, the sixteen-year-old witnesses an exact reenactment of a scene from his favourite novel. Slightly problematically, however, in this particular scene the leading man is el diablo. It turns out the truth is a devil to come by, too; the novel spans 510 pages and three decades (’40s, ’50s and ’60s), and the plot’s more topsy-turvy than the architecture of Gaudi’s Park Guell.

More melding of the Catalonian capital with general sinister intent (a new genre- Barcelonoir?), in a subtitled series that centres on the forensic investigator Sara Grau; she has her hands fully balancing her professional and personal life, and her mortuary slabs full with the bodies of strangulated old ladies.

Sitting in a window in old (well, 1686 to be precise) Amsterdam is a perfectly-scaled, nine-room, miniature city-centre townhouse. The curio is a wedding gift for Nella Oortman, principal of The Miniaturist, a country mouse who has just moved to the big smoke (and is forbidden from enjoying the capital’s world-renowned cheeses by a Puritanical sister-in-law). Finding herself increasingly stultified, Nella, after riffling through the Yellow (Geel?) Pages, enlists the local miniaturist to fit out her dolls’ house with figurines and furniture. Yet when extra embellishments in the form of perfect replicas of herself and her household start showing up unsolicited, Nella realises something fishier than a plate full of Kibbeling’s afoot. What’s more, these titchy totems seem to have the ability to predict future dangers…

Exhibit A(’dam): Petronella Oortman’s cabinet house, an image of which prefaces The Miniaturist.

Actress-author Burton was inspired by an artefact she saw on display in Amsterdam’s Rijksmuseum: the ‘Dolls’ house of Petronella Oortman, anonymous, c. 1686-c. 1710.’ This exhibit can currently be viewed online via the ‘Rijksmuseum at Home’ scheme: visit www.rijksmuseum.nl/en/from-home for the full programme, and it can be found on the ‘Highlights 1- orange tour.’

Meanwhile, highlights of the book include a feminist riddle worthy of a tattoo (‘Every woman is the architect of her own future’), a gavel-thumping courtroom scene, and a celebration of the Dutch capital in all weathers.

‘Looming above the sludge-coloured canal, the houses are a phenomenon. Admiring their own symmetry on the water, they are stately and beautiful, jewels set within the city’s pride. Above their rooftops Nature is doing her best to keep up, and clouds in colours of saffron and apricot echo the spoils of the glorious republic.’

Double your Dutch with Amsterdam’s answer to Sherlock, featuring a surly lead detective (Mark Warren), not one but three sassy sidekicks, and a slew of murders to be solved. Plus, everyone in the capital just so happens to speak fluent English, putting subtitlists out of a job.

Fancy some Rainbow Reads for grey sky season? Click the link (you know you want to!)