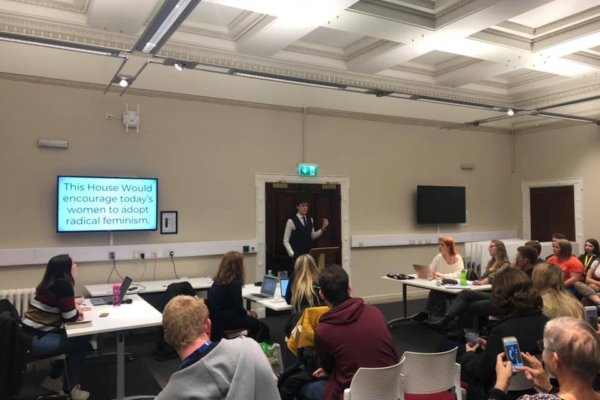 Though the University of Liverpool is known for success in many arenas or sport, this year has brought us a rising star in the inter-varsity world: the debating society. Now, as we near the end of our academic year, its time to count our wins.

This academic year, the Liverpool Debating Union has had 13 different teams reach the finals of various competitions, also having 16 judge breaks (meaning that a judge has done well enough to proceed to the finals). And this is only of their current members – their alumni have gained achievements in the judging, speaking and organising of competitions too.

The first semester began with the introduction of new members to competitive debating by pairing them with older debaters in pro-am teams to compete in the Red Rose Cup – an amateur debating competition between debate teams from Manchester, Lancaster and Liverpool. This year, whilst Manchester ultimately won the competition, there were three Liverpool teams in the final, and three Liverpool judges on the final panel of adjudicators. This being the first competition that many of the first years (referred to as novices in the debating world) had participated in, many of them found it daunting at first, as noticed by one of the participants when I spoke to her:

I didn’t want to speak before the debate and felt so sick, but my speaking partner went through our argument again, so when I got up there and made my case, it went better than I ever thought it could have – honestly, I was genuinely amazed at how much I’d improved!

From there, the debating union has begun to attend and progress in more and more competitions each weekend, with successes across a range of Northern powerhouses, including Durham, Hull, Lancaster, Sheffield and York. One of the highlights was a streak of judge breaks by Georgia Metcalfe (second-year politics student) that led her to become the union’s joint most successful judge of the year. Another was the break to 2019-20 President Joshua Forrester and 2014-15 President Jack Stanley reaching the semi-final of the Birmingham Open.

Though, this hasn’t stopped because of coronavirus, like most university events. Debating has hit the internet by storm, and, with a number of the debating union’s members made curious by the concept of online debating, we’ve had four judge breaks at online competitions to date. Now, we only wait in anticipation for the European Championship, where independent participants from Liverpool’s A and B teams have chosen to go head to head against some of Europe’s toughest debaters.

Of course, these arent the only successes that we’ve seen in the Liverpool debating sphere since September. Liverpool Debating Union has organised networking events, workshops with the Careers Hub, whacky socials, and two flagship events:

Unfortunately, due to precautions created by lockdown, they could not host their Inaugural Founders Debate, originally due to take place in the spring at Ullet Road, where much of our University history exists.

Where Do They Go From Here?

This year, we’ve seen a number of wins for the LDU’s competitive debate teams. We’ve seen a broad range of events and guest speakers, as well as an expansive approach to working with schools and the local Liverpool community. They’ve come far since the small debate society of 1866, and now we look to the newly elected President, Cormac Quinn, and his twelve current committee members, to see where they can take the university name next.