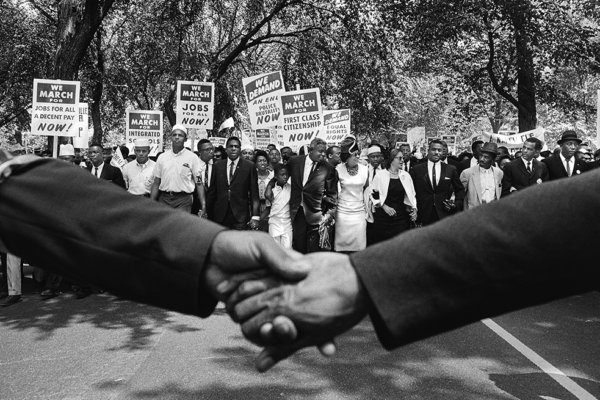 A Brief History of Racism and Violence: Why we Need to Educate Ourselves

A Brief History of the Civil Rights Movement

Violence and discrimination have always been prevalent throughout American history, from the persecution and eradication of Native Americans to the enslavement of African Americans and the bloody war that ended it. While the American Civil War was a step in the right direction for civil rights, it also opened the doorway to the discrimination and continued violence that plagues us today.

The Thirteenth Amendment that abolished slavery in 1865 contained a loophole, which stated that “neither slavery nor involuntary servitude, except as a punishment for crime whereof the party shall have been duly convicted, shall exist within the United States”. Slavery could still exist when criminal punishment was involved, and as a result hundreds of emancipated slaves were pushed into the prison system – ‘legalised’ slavery – for minor offences. The list of ‘offences’ included loitering and abusing curfew laws.

The Post-Reconstruction Era saw extreme disenfranchisement for black communities. Black people had virtually no human rights, were violently murdered and lynched, under threat from terrorist groups like the Ku Klux Klan, and segregated from white people under Jim Crow laws that reinforced the notion that black people were inferior. When the Civil Rights Movement gained momentum in the mid-twentieth century, prominent activists using both peaceful and militant methods helped to end segregation laws, ban racial discrimination in the workplace and bring into power the Voting Rights Act of 1965.

Racism in the Political System

Richard Nixon gained presidency in 1969, only four years after segregation was made illegal. John Ehrlichman, one of Nixon’s top advisors, admitted in an interview in 1994 that:

“The Nixon campaign in 1968, and the Nixon White House after that, had two enemies: the anti-war left and black people […] We knew we couldn’t make it illegal to be either against the war or black, but by getting the public to associate the hippies with marijuana and blacks with heroin. And then criminalizing both heavily, we could disrupt those communities. We could arrest their leaders, raid their homes, break up their meetings, and vilify them night after night on the evening news. Did we know we were lying about the drugs? Of course we did.”

Despite the Civil Rights Movement successfully stimulating changes in society, politicians were able to continue oppressing black communities by disguising their tactics. The war on drugs justified the incarceration of black citizens because it was seen to be in service of social betterment. As well as harsher drug legislation, more prisons were being built to accommodate the growing number of inmates. Intense media campaigns both perpetuated and justified the war on drugs, as they generated fear in the general public as well as an urgent need for harsher legislation.

The war on drugs and era of mass incarceration continued into Bill Clinton’s presidency in the 1990s. The Crime Bill passed in 1994 saw more prisons being constructed, harsher sentencing and the introduction of a ‘three strikes and you’re out’ system, where re-offenders were given life sentences. The American Civil Liberties Union state that “despite making up close to 5% of the global population, the U.S. has nearly 25% of the world’s prison population. Since 1970, our incarcerated population has increased by 700% ­­– 2.3 million people in jail and prison today, far outpacing population growth and crime.” They further estimate that a third of black people who are born today can expect a ‘brush’ with the law in some form.

The persecution of and violence towards black people has always been ingrained within the American police and political systems, and still occurs on a regular basis in our modern day. From the time that police forces were formed, those in positions of power have had the authority to stop, search, detain and brutalise black people if they were seen to be doing something ‘suspicious’. The extreme prejudice against African Americans is undoubtedly caused by the long history of stereotyping and discrimination and has deadly consequences.

All murdered by the very police that were sworn to protect them.

These names do not even scratch the surface of those who have been unlawfully killed – the list goes on and on.

Furthermore, the names of many black women who are killed by the police often go unnoticed – think about how Breonna Taylor had a lot less press coverage than George Floyd. Kimberlé Crenshaw gives a beautiful TedTalk on intersectional discrimination and police violence, and I would highly recommend watching it here: https://www.ted.com/talks/kimberle_crenshaw_the_urgency_of_intersectionality

The negative stereotypes that have been attached to black men and women – criminal, aggressive, welfare cheats, promiscuous, dangerous – are historic. And they served a purpose to those who attached them, with obvious detriment to whole communities of people. George Floyd may seem like just another name on the terrifyingly long list of men and women who have been unfairly beaten, murdered, incarcerated, and stereotyped by the government and police forces. But George Floyd is not just a name; he has become a catalyst for an upheaval in society, and that is why the riots are (and should be) taking place.

Many query whether the methods protestors are using to be heard are valid. However, the protests that have occurred in the past have obviously not made an impact on the government – think of the Ferguson protest in 2014, the Baltimore protest after the death of Freddie Gray in 2015 or the protests after the Charleston church shooting. When racial discrimination runs so deeply throughout our history, the only ways to change it have unfortunately become extreme. As abolitionist Frederick Douglass wrote in 1866, “the thing worse than rebellion is the thing that causes rebellion.” Before us is an opportunity for real change, a chance to create the “justice system based on reparation and reconciliation rather than retribution and vengeance” that activist Angela Davis calls for in Are Prisons Obsolete.

Why we all need to educate ourselves

Members of society from every community, background and skin colour have the opportunity to stand together and support our black allies in order to create real change in the world. As daunting as the task may seem, it is not impossible, and the perseverance of rioters amid the police force’s rubber bullets and tear gas really represents a symbol of hope.

Furthermore, many argue that it is not the place of white people to fight for the black cause, which is true. The opinions of white voices, like mine for example, should not overtake or be used in the place of the incredible black activists, historians, academics, musicians, and communities that are available. However, white people should use their privileges to support black voices, to educate themselves on where the discrimination has come from, to listen to the plight of black communities and to try to remove the prejudices that have been ingrained within us through decades of institutionalised racism.

If you haven’t yet seen Dave’s performance of ‘Black’ in at the 2020 BRIT awards, I would definitely recommend giving it a watch. I was blown away when I first saw it and re-watched it multiple times; he sums everything up much more eloquently than I ever could.

I will include here a list of sources that I used for this article, as well as some other books and articles that I found enlightening when writing my dissertation on intersectionality:

The New York Times, ‘A History of Race and Racism in America in 24 Chapters’ (https://www.nytimes.com/2017/02/22/books/review/a-history-of-race-and-racism-in-america-in-24-chapters.html)

I will also link a list of anti-racism resources compiled by Katie Couric: https://medium.com/wake-up-call/a-detailed-list-of-anti-racism-resources-a34b259a3eea

New Launches for the Festive Season