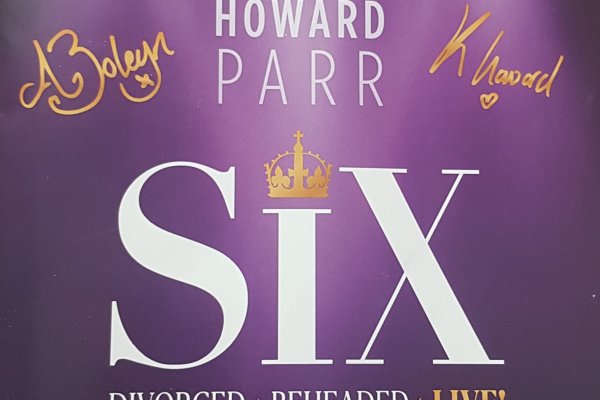 SIX: The Musical has embarked on its UK tour this year. It is rewriting his-tory to HER-story, and what an epic show it is!

I was, unfortunately, unable to see this amazing tour at the Playhouse in Liverpool a couple of weeks ago. However, I had tickets to see it in the West Midlands! This show arrived at the perfect time – everyone at the theatre, from the audience to staff members to the cast, were brilliant, kind and just happy to share their love of musical theatre.

SIX has had an amazing journey. It is an original musical penned in 2017 by two university graduates, Toby Marlow and Lucy Moss. They managed to grab a slot at the Edinburgh Fringe festival in 2017, which shortly led to moving to the West End in London. Because of this massive success, SIX began to spread its laughter and joy throughout the UK on tour and is set to hit Broadway shortly.

The musical is about Henry VIII’s six wives and their history – but with a twist. All six of them form a pop group, in which they all compete to be the lead singer based on who had to deal with the most ridiculous treatment from the big man himself. The story is funny and witty, with many quirks and innuendos to make the queens’ experiences uplifting and relatable to a 21st-century audience.

Each queen takes it in turns to sing an awesomely catchy pop-song about their lives. But ultimately, the show ends with the queens uniting and revelling in female friendships, love and independence. The show is all about women’s voices being heard in a sea of men’s throughout history. They play on the pun of his-story and change their fates by putting their perspective first, finally being free to stand up for themselves. It is incredibly empowering, clever, funny, witty, and relatable for any female watching. We need shows like this in today’s society to make women feel valuable when life tells them they are not.

Lucy Moss has returned to direct the tour, with Jamie Armitage and Carrie-Anne Ingrouile as the choreographer. Together, they transform the show to accommodate multiple theatres around the UK, so that SIX can shine its purple light to create happiness and laughter.

Starring as the Queens are Lauren Dew as Catherine of Aragon, Maddison Bulleyment as Anne Boleyn, Lauren Byrne as Jane Seymour, Shekinah McFarlan as Anna of Cleves, Jennifer Caldwell as Katherine Howard and Athena Collins as Catherine Parr. All six women were phenomenal at playing their part perfectly. A highlight of the show was Dew’s incredible voice combined with her comical facial expressions and quips throughout. Aragon’s song, No Way, was one of my favourites.

Other highlights of the show were Bulleyment’s tongue-in-cheek performance of Don’t Lose Ur Head, the hilarious Haus of Holbein (combined with neon glasses and frills – what more could you ask for?) and Caldwell’s All You Wanna Do, which starts off sexy and slick only to become more uncomfortable and upsetting when the audience realise what Katherine Howard must have experienced. An experience familiar to women in the world today

All we need is SIX

This is a must-see musical for anyone who wants to feel empowered and like a badass queen themselves. It is a truly amazing show that puts women first and lets their voices and love shine through. It is a show that will stick around for another 500 years!

Book tickets to see it on Tour here, or in the West-End here.