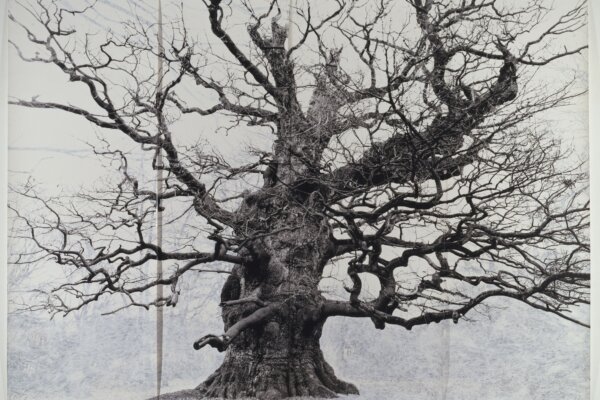 Landscapes in art can be more than fields, trees, and the odd stray sheep. ‘Radical Landscapes’, Tate Liverpool’s timely new collection, illustrates this with over 150 pieces exploring the human relationship to the British landscape over the past century. Here’s the top 10 reasons why a visit to Tate’s latest exhibition will prove the perfect post-exam potter…

Living up to its billing as ‘radical’, ‘Radical Landscapes’ goes left of field(s!) to challenge perceptions of landscape art as quaint and pastoral. While acknowledging the greats at the start of the gallery (e.g. Constable, Flatford Mill [1816-17]), many later pieces challenge the status quo: think Peter Kennard’s (1980) Haywain with Cruise Missiles. The pastiche propaganda plonks nuclear weaponry in the centre of a peaceful Home Counties field, responding just as much to the particular Cold War moment as John Constable’s earlier (1821) The Hay Wain.

2. THE PASTORAL IS POLITICAL

Having a Field Day: Peter Kennard’s (1980) Haywain with Cruise Missiles

From the outset, a major theme of the gallery is the politicisation of our surrounding countryside. This comes across in a cluster of artworks related to the (catchily-named) Kinder Scout Mass Trespass of 1932, and an entire side-room devoted to showcasing artefacts from the ’Eighties Greenham Common Protest. As well as elucidating important social history, these artworks still resonate today – even in 2022, we only have the freedom to roam a mere 8% of the English countryside.

The exhibition may look at artworks spread across the past century, but many are directly relevant to today. These include the photos of Nigel Dickinson, snapped from the ’Nineties to now, for instance NHS Not HS2, taken last year (2021). Meanwhile, Carol Rhodes’ (1995) oilpaint on hardboard Airport recalls the controversies over additional runways at Gatwick and Heathrow which rage to this day.

The previously-mentioned Le Bas has English-Romany heritage, and several of the other featured artists come from minority backgrounds and/or marginalised communities. This includes Gluck, a non-binary pioneer of the queer art scene – their (1923) Flora’s Cloak oil painting is mythical and enigmatic. The careful curation of Darren Pih and Laura Bruni allows a range of non-mainstream voices to be heard…

… sometimes quite literally! The 150-plus exhibits on display are fully multimodal, covering, among other mediums, painting, photography, sculpture, poetry, textile, film, and – strikingly – psychedelic slide projection. This latter comes courtesy of Gustav Metzger, who fled Nazi Germany as a child. His mesmerising, kaleidoscopic screens in Liquid Crystal Environment (1965; remastered 2005) are meant to represent the shifting social mores of the Swinging Sixties.

Another multi-sensory highlight is Back to the Fields (2015-22) by Ruth Ewan. Inspired by France’s experiments with a ‘Republican Calendar’ between 1793 and 1805 (which trialled 10-day weeks and only 5 ‘festival days’), it is formed of 360 items representing the changing of the seasons. Walk clockwise round this living installation to see the seasons turn, breathe in the calming phytoncides, and feel at ease among the trees!

Alongside the usual handy info plaques (e.g. below), ‘Radical Landscapes’ also includes several art-adjacent orange blurbs, penned by professionals and experts. The contributors include environmental activists, PhD students, and the writer Damien Le Bas Jr, winner of the prestigious Somerset Maugham Award for his 2018 novel The Stopping Places: A Journey Through Gypsy Britain. These blurbs offer informative new perspectives to the artworks they accompany.

As well as mixing mediums, ‘Radical Landscapes’ also combines the up-and-coming, home-grown with the well-known of the art world. In the latter category are the Turner Prize-nominated Ingrid Pollard, and the infamous Barbara Hepworth, who has contributed the slate sculpture Two Figures (Menhirs) [1964].

And finally… it’s free! While a visit to the exhibition will cost a member of the general public £13.50, staff and students of the University of Liverpool will not be charged an entry fee. For more information, visit tate.org.uk.