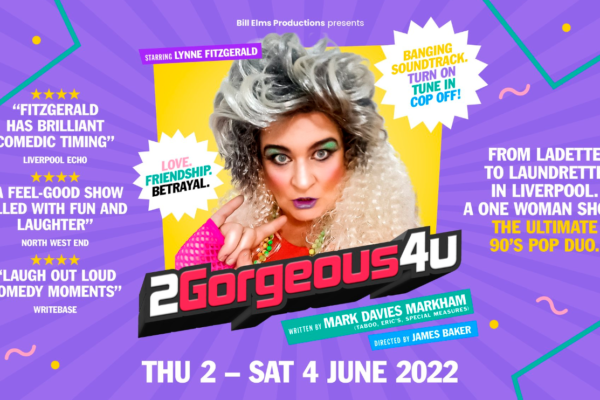 In our shops, screens, and summer music festivals, the Nineties are making a comeback. Will Clare and Tina, the two halves of iconic Nineties girl group 2Gorgeous4u, finally decide to reunite? Naomi Adam headed to Liverpool’s Royal Court to find out.

At the moment, Nineties nostalgia is everywhere. Derry Girls and (yet another) Jurassic Park are on our screens. Halter-necked cropped tops and low-rise bootcut jeans are on the rails at our local high-street stores. Steps and the Sugababes are on the line-up for this summer’s hottest music festivals. (Of course, given British weather patterns, said festivals are unlikely to actually be hot…). All of which should make the perfect climate for the comeback of Clare and Tina, a.k.a. Scouse girl band, 2Gorgeous4U.

Now stop – wait a second. No need to head to Google to figure out why you’ve never heard of them. They’re fictional. In fact, they’re not even a duo. Instead, ‘2Gorgeous4U’ are the creation of Mark Davies Markham (Taboo, Special Measures), part of his latest, one-woman play of the same name; both Clare and Tina (along with 8 others of various ages and genders) are played by the multi-talented Lynne Fitzgerald (Desperate Scousewives).

What’s It All About?

The show premiered with a sell-out run at last year’s Liverpool Theatre Festival and centres around a series of questions. Will main character Clare, former pop star and current spa owner, ever find love via her favourite dating app? Will she ever flog enough French manicures to be able to fulfil her dream of having a wet room? Finally, will Clare make up with estranged pal Tina in time to reform 2Gorgeous4U for a music festival in Sefton Park?

Being interval-less it’s an intense gig for sole cast member Fitzgerald, with over an hour’s worth of lines to learn for 10 distinct characters. Nonetheless, she clearly relishes the opportunity, even playing three different generations of the same family with gusto. Her portrayal of Clare’s typically woke, uni student daughter is especially hilarious – particularly when it comes to her response to her ma’s hunt for a man. Where things do get a little tricky, though, are with these (supposedly) multi-person scenes. With staging minimal and costumes monochrome, it’s left to Fitzgerald to switch up her voice enough to distinguish between the various characters. Given that all ten are proudly Scouse, it was at times difficult to work out who was who. Protagonist Clare also had a penchant for a Miranda-style aside, adding yet another (head) voice into the mix.

Where are we now?

The show is a lot stronger on its sense of place. We begin on Waterloo high street and end at Sefton Park, by way of Anthony Gormley’s iconic ‘Another Place’ installation on Crosby Beach. There are shout-outs to Bold Street’s Leaf and the (now demolished) nightclub Cream. For those familiar with the local area, these geographical name-drops cue a detailed mental backdrop – useful given the otherwise sparse staging.

Nonetheless, all this is yet another level of mental effort for the audience: after distinguishing a Clare from a Tina character-wise, the audience must divide a Crosby marina from a Tinder-date-appropriate bar scene-wise. A little more prop-led direction to guide this mental modelling would have been helpful. Where props were used (such as reversible bedspread/tablecloth with witty fry-up applique) they were highly effective.

The show’s main strength, however, lies in its script, courtesy of Mark Davies Markham. The award-winning, Bootle-born Markham has an illustrious back-catalogue, having written for television, radio and various national theatres. Yet it was at Liverpool’s Lunchtime Theatre that his very first play, Are You Awake?, premiered back in 1984, and over 35 years later he clearly remains attuned to the cadences and comic potential of the Scouse tongue. Describing a late-night vape on the steps of the Bombed Out Church, the line ‘The smoke she blew was so big I thought a genie would appear’ was a particular crowd favourite.

Were there to be a magical cameo, they may be able to grant my three wishes for future productions of 2Gorgeous4U: