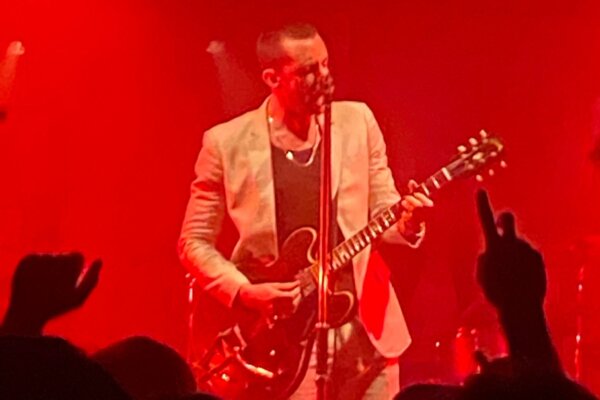 I first became aware of Miles Kane after hearing his song Don’t Forget Who You Are. A track on his second studio album (of the same name), it featured in the video game FIFA 14. Recently, I came across an incredible video of an audience of thousands singing that same track back to Kane, at Foro Sol, Mexico City, in 2019.

I hadn’t really heard any of his other music but had friends who were quite into his sound. I was interested in hearing more, so took the opportunity to see him live, as he played a home town gig in support of his latest album, Change the Show.

Straight from watching Liverpool dramatically clinch the Emirates FA Cup, I headed to the O2 Academy. Kane, who hails from Birkenhead, is a Liverpool FC supporter. His support act Brooke Combe collaborated with Jamie Webster, himself synonymous with The Reds, on a cover of Talking Heads’ “This Must Be the Place”.

As the performance area filled, Combe was warming up the crowd, notably performing a cover of Why’d You Only Call Me When You’re High by the Arctic Monkeys, whose lead singer Alex Turner shares the vocals with Kane in supergroup The Last Shadow Puppets.

Miles Kane at the O2 Academy

As Combe finished, Kane finally took the stage. He opened with Don’t Let It Get You Down, the second track on his new album, which features Paul O’Grady. Soon, Kane would invite well-known artist Corrine Bailey Rae on stage. While she disappeared from the limelight after her eponymous number one album, she was back with a bang. Performing Nothing’s Ever Gonna Be Good Enough with him, their voices perfectly complemented each other.

Caroline and Blame It on the Summertime would emerge as two of my favourite songs on his setlist. I had been looking forward to Don’t Forget Who You Are and it did not disappoint, with Kane performing an extended version as the crowd repeated the chorus.

He then covered home town heroes The Beatles’ Don’t Let Me Down. Their last live performance together was of that song and it plays as the credits roll, on The Beatles: Eight Days a Week.

Concluding the evening, Kane selected “Come Closer” for the encore, at one moment folding his arms above his head, just savouring the moment of his adoring public singing every word of his final song.

The perfect ending to a memorable day.