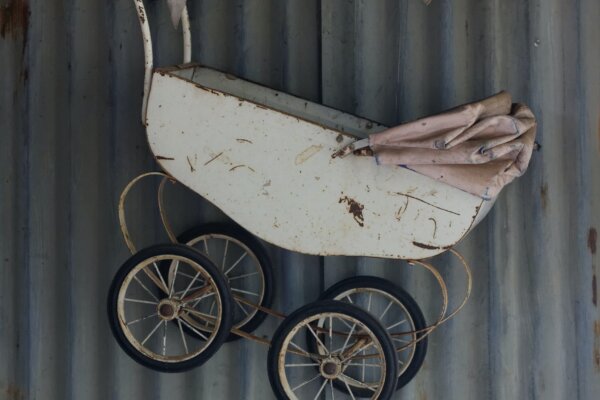 Opening with a piercing scream, the tone was well and truly set for Mark Heller’s Killing Mice. As darkness fell around St Luke’s Bombed Out Church, the cast of three seized the eerie half-light and used it to its full effect. This unsettling drama entwined a dark Victorian past with the modern day.

Summer (Rachael Wood) and Mabel (Jennie Crum) are best friends. Throughout Summer’s pregnancy, the audience gets a glimpse into the best friends’ lives. We also get to meet Summer’s husband, Simon (Phil Hunter). Summer presents Mabel with an old Victorian pram. She’s delighted at the prospect of a renovation project for her friend’s newborn. However, the group discover it belonged to a Victorian era murderer! Divided opinions arise about whether to keep it and bickering ensues.

Witty and dry-humoured, the audience cracked up at the fast-paced rapport between the characters. Tension escalated steadily and unpredictably, gathering pace as long-held secrets were slowly revealed. Comic in the role of Summer, Wood added life to the play; particularly needed, as life slowly drained from the increasingly withdrawn Mabel. Each character complemented the other, as they filled the space in the Liverpool Theatre Festival marquee with ease.

The complex set only added to the performance, which commands the audience’s attention throughout the show; despite appearing a little crowded, with the kitchen, sofa, pram and curtained-off wooden frame. The cast worked with fluidity around the stage and never lost pace. Hunter brought a new dynamic to the fore with Simon, an effortlessly entertaining character with a sting in his tail.

Greeted initially by a softly haunting melody, the music throughout and in between scenes accelerated the lingering suspense and foreboding. At times the breaks between scenes were slightly too long. However, this certainly didn’t hamper the tale and the acting from the cast kept the show firmly on track. Lighting was well-timed and directed, which kept the macabre mood and fueled the on-stage horror. There were fleeting moments at the height of the drama that felt a little contrived. Luckily, it was here that Crum came into her own, delivering an excellently chilling performance.

Well-written and arresting, Killing Mice managed to deliver a vividly unnerving drama, infused throughout with slick comic relief. Clever twists kept the audience guessing, with an ending that did well to stray from the occasional predictability of dramas. The sharp juxtaposition of comedy and dark scenes kept the audience hooked, holding tension. Crum, Wood and Hunter brought Heller’s hair-raising script to life.

You can find further reviews here.