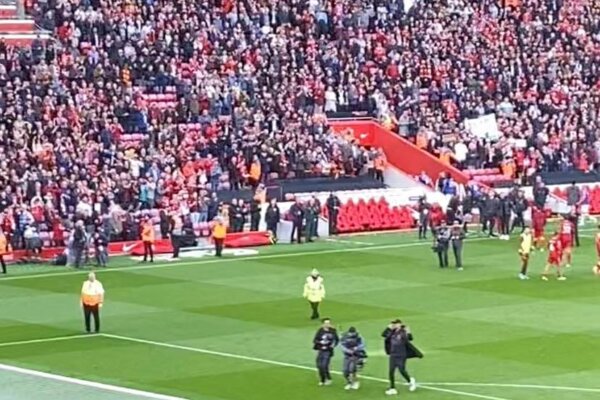 Reds win the 240th Merseyside Derby. When will the next instalment follow?

After a frustrating first half, Robertson and Origi, of course, break the visitors’ resistance.

So much more was at stake than just rivalry.

Everton began their campaign under the stewardship of former Liverpool manager Rafael Benítez and have turned to Frank Lampard to rescue them from relegation. It has been disastrous.

Nevertheless, they did claim a vital point on Wednesday night with Richarlison scoring a 92nd minute equaliser at home to Brendan Rodgers’ (LFC ‘12-‘15) Leicester City.

Contrastingly, Liverpool, competing on three fronts after already winning the Carabao Cup, defeated both Manchester clubs in the space of four days, latterly scoring four without reply against Manchester United.

Rotation is unavoidable with The Reds’ run-in. Naby Keïta replaced captain Jordan Henderson and Luis Díaz was unfortunate to return to the bench after a goal and assist. Diogo Jota, reinstated.

Unsurprisingly, Lampard copied José Mourinho’s blueprint, organising his players defensively, intending to counterattack. Consequently, neither side registered a shot on target in the first half.

The Reds were most incisive and inventive when they played through Everton. Sadio Mané spun Allan and finessed over.

Anthony Gordon has been The Blues’ shining light. Nevertheless, it would not be the first-time controversy surrounded him as referee Stuart Atwell cautioned him for simulation.

Robertson cut the ball back, but Jota planted his snapshot wide.

The reward from The Reds’ high defensive line often outweighs the risk but Virgil van Dijk refused to withdraw. Richarlison released Abdoulaye Doucouré, but he dragged wide from a similar position to which Richarlison had scored the opening goal, 14 months earlier. With chances at a premium, he had to convert.

Richarlison, a master of the dark arts, was down for a considerable time. Liverpool refused to stop which culminated in Doucouré kicking out twice at Fabinho. Boiling point. Immediately, Atwell diffused the situation by brandishing a card.

Everton had a penalty appeal dismissed when Gordon was adjudged to have fallen too easily.

He then had a golden opportunity but miscued.

When necessary, Jürgen Klopp makes positive substitutions on the hour. He switched to a 4-2-4 formation with Diaz and chaos agent Divock Origi introduced in place of Mané and Keïta.

Salah exchanged a one-two with Origi, and Robertson arrived at the back post for his first goal at The Kop.

Salah could have doubled the deficit in double-quick time.

Strikingly, Thiago Âlcantara completed 120 passes to The Blues’ 94. He shaped to shoot, and his pass-like effort was palmed behind.

From the corner, Henderson retrieved the ball and detected Díaz at the far post. Acrobatically, Díaz volleyed the ball and Origi headed home, the two substitutes combining. Death, taxes and Origi scoring against Everton.

Alisson imitated Pickford, falling onto the ball. A taste of his own medicine.

One point. So close, yet so far. But not over.