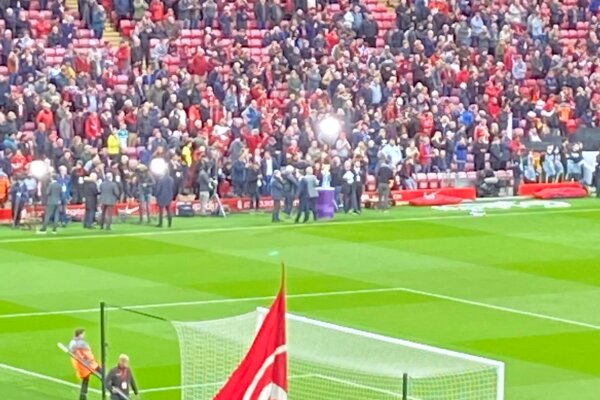 Following their 5-0 victory in the reverse fixture, all the front three of Diaz, Mané and Salah net and assist as Liverpool score four without reply against United at Anfield for the first time since 1990.

Two days later, it was with great sadness that the world learnt of the passing of Ronaldo and girlfriend Georgina’s baby son. Poignantly, seven minutes in, all four sides of Anfield would stage a minute’s applause. Grief transcends rivalry.

Whilst Jürgen Klopp had a clean bill of health from which to select, making just two alterations, opposite number Rangnick was without Ronaldo, Varane, Shaw, Fred and Cavani.

United fans’ worst fears were confirmed, and Kopites’ nerves were settled when Liverpool broke the visitors’ resistance after just five minutes. Mané’s ball over the top eliminated the United back five far too easily. Alexander-Arnold and Salah were almost fighting over who would roll the ball across the face of the goal. Salah emerged victoriously and Diaz side-footed the ball beyond a helpless De Gea.

Mané then whipped a ball with his instep towards Salah that invited him to direct the ball to the bottom left of De Gea, to end his seven-game goal drought.

In a game where United only enjoyed 28% possession, The Kop inflicted further humiliation, comically olé-ing as they passed around a ball whilst referee Martin Atkinson had a new microphone fitted before the restart.

Surprisingly, Sancho was benched. However, he replaced Phil Jones at the interval as Rangnick reverted to a back four.

He provided chances for Marcus Rashford and Antony Elanga. Importantly, Alisson denied both, with the replay showing they were onside.

After a scintillating first half, Liverpool had to conserve their energy, but caught United with a sucker punch.

Andy Robertson intercepted the ball from Elanga, embarked on an enterprising run and offloaded to Diaz. He raised his head and detected Mané with a precise cut-back. Mané duly guided the ball with his left foot, on the half-volley, out of the reach of De Gea’s despairing dive.

Hannibal Mejbri faced a baptism of fire as he replaced Elanga. Immediately, he was easily dispossessed by the tireless Robertson. Then, substitute Jota released Salah who dinked the ball over De Gea. Goals like busses for Salah…

It should have been 5-0, again, reflective of the chasm.

Man of the Match: Thiago Âlcantara – he has stepped up another level; his passing was world-class; and his standing ovation was a love-in between fans and player.

Now, The Reds have performances to match their results.

City is one point ahead – but there is a belief.

It won’t get better than this. Savour. The. Moment.

The best atmosphere of the season. Same required for Sunday’s Merseyside Derby.