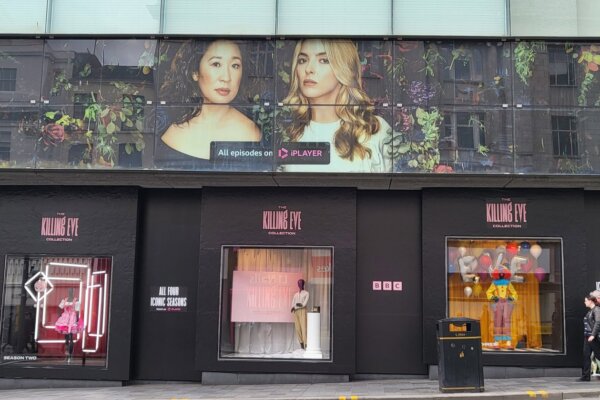 A temporary fashion exhibition, with a killer twist, has been installed in the windows of the vacant Debenhams lot on Liverpool’s Lord Street. Head past Costa’s giant ‘pipe cleaners’ in the city centre before Saturday 23 April to discover five displays of costumes and props from the award-winning television series, Killing Eve. The show – which dropped the last episode of its fourth and final series earlier this week – centres around the complex relationship between MI5 agent Eve Polastri and her mark, the assassin Villanelle, played by Liverpool’s own Jodie Comer.

Comer’s character is renowned just as much for her couture as for her killing. Some of her classic looks from across the four series featuring in this new installation, curated by BBC Creative. This includes the iconic Molly Goddard tulle “therapy dress” from Series 1 in the first window. Series 2’s raspberry-pink dirndl, complete with obligatory piggy headwear, is in the second.

Not to be forgotten is the show’s second protagonist, the eponymous Eve. One of her less outre outfits also features in the display, alongside an avalanche of Villanelle’s handwritten ‘SORRY BABY X’ notes.

Ali Dickinson, Creative Director at BBC Creative, said, “This is one of those rare shows that has a genuine impact on culture. The fashion in Killing Eve really is like nothing else. As Villanelle would say, it’s anything but, “BOOORRIIINGGG!”

The installation runs until 22 April 2022, and is free of charge to view. Why not head over during the hols to snap yourself a selfie, in honour of television’s greatest fashionista assassin?

The Killing Eve collection is at Lord Street, Liverpool ONE, L2 1TA between 13 and 22 April 2022. All episodes of Killing Eve are available to stream on BBC iPlayer now.