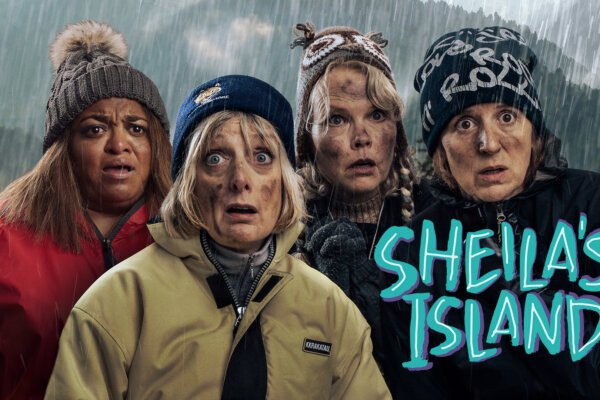 Crisis for the Management: Sheila’s Island

Sheila’s Island: They say there’s no ‘I’ in team. There are, however, a whopping 6 in Team C: Pennine Mineral Water Limited Outward Bound Team-building Weekend.

Perhaps that explains the dynamic when said team find themselves stranded on an uninhabited island in Derwentwater, Lake District, with darkness fast approaching. (It’s certainly not Team C for ‘Competent’, that’s for sure.) All of a sudden, it’s every woman for herself.

These four women – Sheila (Tracy Collier), Fay (Emily Jane Kerr), Denise (Abigail Thaw), and Julie (Rina Fatania) – are all middle-class, middle-aged, middle managers, and the play’s only characters. (Save, that is, for the overenthusiastic voice-over roles of Keith and the disco boat crew.)

Three’s a Crowd, Four’s a Team

Being a four-hander means it’s heavy on the line-learning for all the actors involved. Even more so given the Sugababes-style casting situation, in which two of the original line-up were swapped out due to illness, replaced by an understudy (Tracy Collier) and a gung-ho member of the production team (Emily Jane Kerr). Understudy Collier, promoted by kismet and Covid to a part as team leader ‘It’s my island!’ Sheila, brought a necessary gravitas to her elder incarnation of the role. Even being (understandably) still ‘on book’ suited Kerr’s Fay, somehow cementing her character’s instability and general sense of bewilderment.

So, perhaps it really is ‘good for team-building’ to be subject to a crisis. Sheila’s Island’s newly put-together girl-group were certainly harmonious as a cast. In a promotional interview, Abigail Thaw has said, “There’s nothing like being together in a group and having a big communal laugh. It’s making us laugh, anyway!”, and this was clear in subtle smirks among the cast after certain lines. This could have detracted from the audience’s ‘willing suspension of disbelief’ slightly, but, by and large, we were too busy laughing along ourselves to mind.

“There’s nothing like being together in a group and having a big communal laugh. [The show’s] making us laugh, anyway!”

Calendar Girls in the Lakes

For the script of Frodsham-born Tim Firth (screenwriter of Calendar Girls) was, in parts, hilarious. There are relatable gags filled with middle-class gripes involving multigrain loaves in Aldi, memory foam mattresses and the ubiquity of McDonald’s. Yet other sections of the script fell a little flat, perhaps too subtle or suited more to the written than spoken medium: witty word-play like “Pennine Mineral Water Outbound will bound out to rescue us…”, for instance. Elsewhere, frequent references to nearby locations – think Salford Quays or the Wirral Peninsula – were more appreciated, even if there was a joke or two at the expense of the locals.

Humour has long proved to be a universal coping mechanism, and so it played out among the cast’s four middle managers. It was a clash between styles of humour, though, which provided the play’s friction. If Denise’s was prickly and personal, Julie’s was loose and lumbering: Rina Fatania plumped for a Daisy May Cooper-style guilelessness that only a seasoned comic actor could serve up.

Although the play has been billed as a mash-up of Lord of the Flies and Miranda, it definitely errs more towards the latter. There’s little actual action, especially in the first half: it’s much more punchline than actual punches. If this all threatens to get a little stale, there’s some squabbling over a sausage to keep you entertained, and a more gripping second half as the psychologies of the characters begin to be unravelled. Heavy issues – sexuality, mental health, suicide – are addressed sensitively, and humour and hardship once again prove perfect partners.

If the script misses a trick it’s not weighing in on the issues of gender. ‘Sheila’s Island’, after all, was once ‘Neville’s Island’, a 90’s play/television programme following a similar trajectory, but with added testosterone. Exchanging an all-male production for an all-female one could have occasioned comment about a culture of gender disparity in the workplace, (just why did it take Denise 28 years to rise through the company’s rankings?). On this topic, though, the script remains as sparse as Liz Cooke’s set, all skeletal tree limbs strikingly enveloped by the encroaching (dry ice) fog.

Following its Tuesday night premiere, ‘Sheila’s Island’ was forced to cut short its planned 5-day run, due to ongoing cast illness. It’s a shame that this (largely) light-hearted lark about four lost ladies has been laid low by the lurgy. Goodness knows, we could all use a laugh after the past two years and numerous lockdowns. With any luck, a rescheduled run is in the offing, so Liverpool’s theatregoers may soon be giggling along to lines like; “Somewhere out there fish are swimming round with my socks on”. Laughter is the best medicine – no trout, er, doubt.

‘Sheila’s Island’ : A Comedy in Thick Fog, an Yvonne Arnaud Production by Tim Firth was at Liverpool’s Everyman Playhouse Theatre on April 5. For details and more information, visit everymanplayhouse.com.