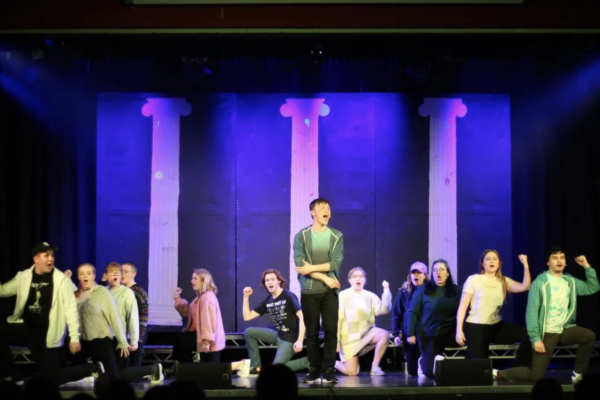 Look, Percy Jackson may not have stolen Zeus’ lightning bolt, but he did steal our hearts. The Liverpool University Student Theatre (LUST) production of ‘The Lightning Thief’ was incredible from start to finish. We could all see it was a true passion project from a dedicated and enthusiastic team of students who have futures beyond the stage of the Stanley Theatre. I locked eyes with my friend in the midst of the applause after the opening number and we immediately knew our night would be memorable. We joked with the cast that we could write a whole dissertation on how impressed we were. It was the best non-alcoholic night Hollie has had in Liverpool so far!

Thomas played Percy and oh my god(s), he delivered on all accounts. His voice left me in awe on multiple occasions. Whilst the actor remained rather humble off-stage, there was the perfect causality to the character’s sarcasm and witty one liners. His charismatic characterisation was book-accurate — much to the ecstasy of this avid Percy Jackson fan. Sharing that he had previously read the books, Thomas hit the nail on head when talking about the necessity of stories like Percy’s. “Not a lot of people get represented with things like LGBT, neurodivergence, anything like that, so something like this is really important”. Athena-like wisdom aside, his shining moment came in ‘Good Kid’. Here he was able to showcase both his emotional range as an actor and his vocal ability as a singer.

Megan and Simon completed the main trio as Annabeth and Grover, all of whom had such a natural chemistry. “We all went out and got really drunk together and became really good friends. It’s easier to act on stage when you’re actually friends with each other,” Megan admitted. Despite initially not being overly familiar with the show, the actress artfully navigated the changing dynamics of Annabeth’s relationship with Percy. She also stunned in her solo performance of ‘My Grand Plan’. Megan embodied the fiery spirit of Annabeth, allowing her to make her own unique mark on the well-loved character.

As for Simon, he aced the comedic timing of Grover but simultaneously tapped into the duality of the character with his powerful rendition of ‘The Tree on the Hill.’ The fact he performed most of the show under the hot lights in furry satyr trousers as part of his costume is worthy of applause alone. Costume challenges aside, he confessed the most difficult part about playing the character was the stamina required for such a role. ”It’s just so high energy…it’s challenging and I mean, that’s why I love it, it’s always a different challenge every time.”

Outside of the core three, Joseph delivered potentially my favourite show-stopping moment with ‘Another Terrible Day’ as Mr D. Yes, ‘D’ as in Dionysus, the god of wine. There was a magnetism and confidence to him that immediately captivated the audience. What had previously been an unmemorable part of the soundtrack became a new staple on my Spotify playlist. In Jospeh’s own words, Mr D. was such an entertaining yet complex character to play because it allowed him “to channel his inner dickhead”. That’s not to say there was any weak link in the cast though.

David, as Luke — Hermes tattoo and all — played the unexpected antagonist with surprising sympathy and careful manipulation. Spoiler alert! His antagonism reaches its crescendo in the final battle sequence. His rendition of Percy’s ‘Good Kid’ in ‘The Last Day of Summer’ stuns. David navigated the many faces of Luke smoothly, although he wants it on-record that “murder is not okay”. His ability to sing and sword-fight is on par with his ability to balance musical theatre and his computer science degree.

The likes of Megan Bolland, Amy Chowns and Henry Sinclair juggled switching between roles without missing a beat. They transformed themselves through costume, body language and even voice. It really is the support of the ensemble that elevates The Lightning Thief — metaphorically and literally. Without the ensemble, Thomas would probably have broken a few bones during ‘The Minotaur/The Weirdest Dream.’

The Attention to Detail

The effort put into the show was apparent from the offset. “We spent so many hours covered in PVA glue, sewing things together, stripping materials, glue gunning beyond belief,” Maddie (Clarisse LaRue) said. When they had spare time, the cast and crew would come in to help out.

Everyone has attached themselves to the show as well. A show like this, the amount of work that it takes, if you don’t have passion behind it from everyone involved, you’re not going to get the response.

Friendship and family defines Percy Jackson, as both a show and book series. Without the combined efforts of every single person who contributed to the play, the warmth that transcended the script wouldn’t have translated in performance. From the attention to detail on props to the tension and the triumph in scenes spawned by the pit band in their iconic Camp Half-Blood t-shirts, it was an unforgettable experience. Anything out of the ordinary will always be a challenge, but the company approached the challenge with the reckless bravery of a half-blood, and it more than paid off. As one of the first few universities in the UK to perform this, there was little for the directors, Amelia Rogers and Rebecca Llannelly, to fall back on, but it allowed for an unbeatable fantasy of their own making with the vision of longtime fan and musical director, Elly Hinchsliff.

I may not be Poseidon — nor would I ever be caught dead in such an ugly Hawaiian shirt like his in Electrik — but I’ll be damned if ‘The Lightning Thief’ didn’t at least cause some waterworks in the audience.

Check out the journey of ‘The Lightning Thief’ on LUST’s Instagram page for all the behind-the-scenes! You can purchase tickets for their next production of ‘Be More Chill’ here. For more theatre reviews, take a look through our Arts & Culture section.