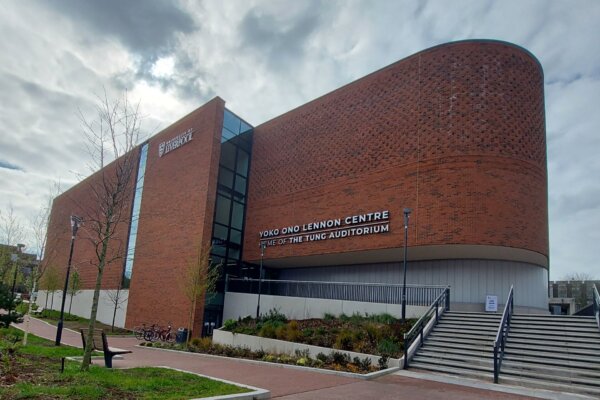 During Mothering Sunday’s sunny weather, the Yoko Ono Lennon Centre held an Open House for the public to explore the University of Liverpool’s novel performance space.

Guests were given a tour by the venue’s new ushers, many of whom are music students. They highlighted the gender-neutral toilets, lift access options, and the classy Fröhlich Café Bar.

The Paul Brett lecture theatre was bright, minimalist and Tardis-like in size. The warmth of the Tung auditorium, with an intimate atmosphere despite its 401 seats.

The centrepiece of the Open House was the treat of watching the University Symphony Orchestra and Chamber Choir rehearse. It was charming to see the musicians dressed in colourful casual clothes, out of the black concert dress usually worn during performances.

The musicians’ talents were continually evident, and it was insightful to see them occasionally halted by the conductor midway through a piece to add advice. There was a particularly interesting interpretation of ‘Imagine’ by John Lennon that seemed to almost inaugurate the space.

The inclusion of the backstage area during the tours’ made the rehearsal all the more impressive. The Ushers invited guests to wander around green rooms and gawk at the warmup piano that Paul Lewis would be playing the coming Tuesday.

Outside the auditorium, in the Peace Atrium, people tied wishes to ‘wish trees’ donated by Yoko Ono herself. Nearby, Artistic Director Richard Hartwell and Prof Catherine Tackley, Head of Music Department, shared how nice Sean Lennon had been on his visit to launch the centre.

What does the Yoko Ono Lennon Centre mean for students?

The state-of-the-art space balances its multiple roles for the University well. It has a study space outside of its seminar rooms and a modern box office at its entrance. Be sure to not make graduation your first trip to the Yoko Ono Lennon centre. Their free Wednesday Lunchtime Concert series would make a refreshing lunchtime break from the library. Or, if you fancy an evening performance, with excellent music at affordable prices directly on campus, it really is too appealing to miss.

Check out a review of a performance at the Yoko Ono Lennon Centre here.