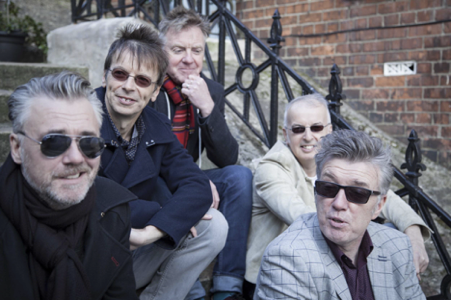 The Undertones at the O2 Academy – Overtones of Fun

The Undertones performance at the O2 was delightfully Irish, delightfully loud and delightfully punk rock in the most accessible way. Minus a drummer but undeterred, the band took to the stage for an enthusiastic rundown of their greatest hits.

The Warm Up: Hugh Cornwell

Cornwell is an English singer-songwriter, actor and author. He opened for The Undertones for their Newcastle, Manchester and Liverpool shows. His enticing mixture of anecdotal songwriting and good humour made for a promising start to the show. We were warm from dancing, from laughing and were ready to see what The Undertones had to offer, following Cornwell’s excellent opening.

The Main Event: The Undertones

Having known very little about The Undertones prior to their performance, I went to the show with an open mind. I purposefully didn’t listen to any of their music before the review, so that I could act as a completely blank slate when it came to their music. Honestly, I was a bit bowled away by how enjoyable the evening turned out to be.

Easily, The Undertones greatest asset is their ability to make a tune catchy. They often take a single phrase (usually the titular line) and repeat it enough that even the newest of listeners can pick it up. A perfect example of this being their song ‘Jimmy Jimmy’; the words ‘Jimmy, Jimmy’ make up the majority of the song.  My friend and I were swept up in a crowd of 30-40 year old (slightly drunk) men, having the time of their lives. Jumping around, we belted out the only line we knew, over and over until we were utterly out of breath. It was fab.

The true highlight of the night was The Undertones performance of their most popular song ‘Teenage Kicks’. Maybe this was because we were delighted to hear a song that we actually knew the words to? Either way, the atmosphere in the room when it began to play was fantastic. Other highlights for me musically were ‘Here Comes The Summer’ and ‘My Perfect Cousin’.

Minus a Drummer, Plus a Friend

The bands drummer, Billy Doherty, was unable to play the show due to last minute circumstances. The performance remained impressively well put together considering the sudden change of circumstances. A friend of the band, Kevin Sharkey, stepped into Doherty’s shoes for the night and made a valiant stand in. In the rare places where Sharkey stumbled, lead singer Feargal Sharkey, ensured his fellow performer was pulled back on track.

Overall, the night was unexpectedly enjoyable, for someone who generally considers themselves decidedly not a fan of rock music. The catchy tunes, loud vocals and audience energy all made for a welcome introduction into the world of The Undertones. I’d gladly revisit anytime.

You can find the rest of their tour dates for this year on their website.