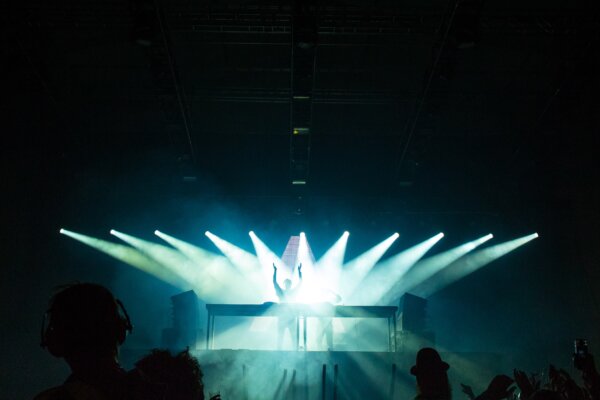 Marking the halfway point of his HELL IS HOME tour in support of his Number One eponymous second album ‘TYRON’, slowthai unleashed a blood-pumping set of cathartic tunes on his fans at Mountford Hall.

LA-born singer Deb Never kicked off the evening with her intimate brand of lo-fi pop and R&B, mostly performing cuts off her recent 2021 EP “Where Have All The Flowers Gone”. I had come across Deb Never before through her features on songs such as ‘NO HALO’ by BROCKHAMPTON and slowthai’s own ‘push’ off of ‘TYRON’, but I had never explored her own catalogue of music. I quickly changed this once I got home. Deb’s cool demeanour and rapport with the audience was a great mood setter, encouraging crowd singalongs to her scathing break-up song ‘Sorry’ and sparking the first of many moshpits of the night during the energetic drop of her recent 2022 single ‘Crutches’.

Deb Never was followed by an artist who was unknown to me before the show, London drill rapper Knucks. While he is out of my typical wheelhouse in terms of what I usually listen to, I ended up thoroughly enjoying Knucks’ performance, providing a high-energy contrast to Deb Never’s more chilled introduction. Accompanied by his own hype man, they supplied the crowd with bass-heavy beats during the Breaking Bad-inspired anthem ‘Los Pollos Hermanos’ and lit up the hall with iPhone flashes during ‘Home’. With both acts encompassing the dichotomy of mood seen on slowthai’s ‘TYRON’, they were the perfect warm-ups and had us all waiting in anticipation for the main event himself (who casually sat not too far above the crowd during Knucks’ set; leaving everyone in my little section of the crowd starstruck).

Slowthai sauntered on to the stage in his comically large furry hat, beginning the show with the dark and grimy banger ‘ENEMY’ coupled with the creepy Blair Witch-like music video in the background. This set the tone for what was hands-down the sweatiest gig I have ever been to, with even slowthai himself drying himself off at several points and wondering how we were all coping amidst the sea of bodies.

Effortlessly balancing the show with peaks and valleys, he filled the first half with songs off of ‘TYRON’, demonstrating why he is one of the most important names in UK rap today through his magnetic stage presence and versatile delivery with hits such as ‘CANCELLED’ and ‘nhs’ (a favourite of mine).

It was the caustic, Denzel Curry-featured ‘PSYCHO’ however that was the highlight for me, conjuring up the most havoc and sending the crowd into an absolute frenzy. Manically moving around the stage like rap music’s biggest villain, he unleashed his full fury on to the crowd and they responded with the most chaotic moshpit of the night. As he said himself, it wouldn’t be a slowthai show without them. Nor would it be one without the self-proclaimed Liverpool fan taunting the Everton supporters in the room by including the Liverpool F.C. anthem ‘You’ll Never Walk Alone’ mid-set, deepening the hilarious back-and-forth that he was so easily able to establish from the minute he stepped on stage.

In the latter half of the night, he capped the set list off with some other classics such as ‘T N Biscuits’ and (what was the decoy final song) ‘feel away’, a tribute to his now passed brother Michael John which was even better live than when I first heard it on ‘TYRON’.

With the crowd calling his bluff after ‘feel away’ when he tried to walk off stage, they demanded that ‘Doorman’ would not be left unperformed and he did not disappoint. The instantly recognisable riff of the Mura Masa-produced track began and was the cherry on top of an unbelievably insane night.

This was certainly a show that I’ll never forget and can now check off the bucket list, even if a shower was much-needed afterward.