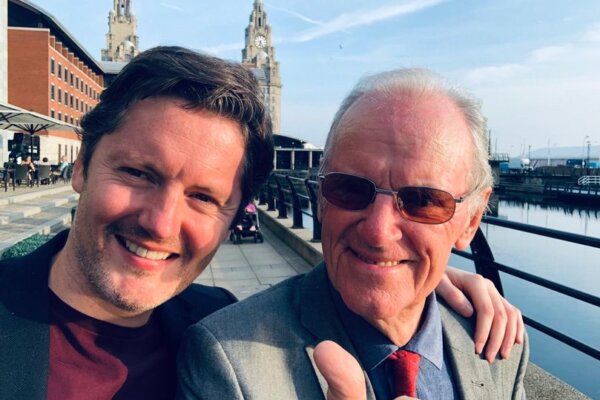 At the end of last year, I had the pleasure of speaking to George Skelly. That’s a phrase people use a lot but I genuinely could’ve chatted to George for hours. I felt we were kindred spirits. We share a strong sense of justice and morality, a passion for helping and elevating others, and sharp, sarcastic wit.

Despite being born in Anglesey, Wales, George Skelly is almost comically Scouse. He has a great sense of humour, he’s a straight talker and he’s proud of his roots. He’s already a published author in the field of True Crime. As he reached his eightieth birthday, in September, he knew it was time to publish his first novel. The Most Familiar Face In the World harks back to his childhood and the true face of working class Liverpool.

The youngest of eleven children, George was brought up in a small terraced house on Heath Street, off Myrtle Street. He grew up just behind Abercromby Square, although it was a little different to how you might picture it now. For example, the railings had been taken for their iron, to use in the war. He said, “it was my playground with the other local kids”, describing how they’d climbed on the pergola and run rampant.

Of all his siblings, only one other brother passed the eleven-plus: a test to decipher which children could be admitted to a grammar school following their primary education. His family “all had working class jobs”, as did he, leaving school at fifteen to work full-time at a butchers. Higher education was frowned on by his family and peers. George himself never aspired to undertake any further education, as “work was a necessity and I needed the money”.

The Value of Education

George was encouraged to access higher education later in life, to provide for his four children. Bringing them up himself after his divorce in the seventies, he worked in the voluntary sector. In Toxteth, where he lived, he worked with Shelter and then with the Workers’ Educational Association (WEA) in Everton.

The WEA serve to enhance accessibility for people from working class backgrounds who want to further their education. This wasn’t lost on George, “I mixed with more middle class people, who encouraged me to go into higher education”. He pursued a two year diploma in English and German at Ruskin College in Oxford: specialists in preparing adults and people from low-income backgrounds to attend university.

He passed this notion to strive for more onto his children, saying, “I pushed them into education to do better for themselves”. His daughter attended LJMU to study business, and John (pictured with George), is now a lawyer in London, with his own legal practice. His grandson is also studying law, at the University of Liverpool.

That’s right, George is a UoL alumnus! Graduating as a mature student in 1976, he studied a joint honours Bachelors in English Literature and Modern History. Returning to study was, “filled with a sadness, trying to remember where my house and my mates’ houses were”. The terraces had been demolished but his classes were held in university buildings around the Square. Winning in the end, he took his “revenge” by sitting in the previous homes of rich shipping merchants.

I was excited to discover that, while at the university, George was part of the student news team too. The News Editor for what was the Guild Gazette, he too sought to bring the publication to the wider community. “We changed the title to the City & Guild Gazette, broadening it to include wider city and community issues like poor housing and transport”. He’d distribute the paper in the city centre and encouraged the university to open the sports centre for local people.

Speaking about his course, he quipped that, “English students are meant to criticise other writers, not to write”. When I asked if his studies had equipped him well for a career in writing, he laughed. Instead, he told me, “I’ve forgotten most of what I learnt because you just learn it for the exams!”

Justice for the Working Class

George Skelly is a hero. Not for everyone, in fact not even for people who know him. George is a hero to men who died a long time past. The problem with True Crime? Time. Research for George’s first book took him twelve long years. If that wasn’t long enough, it set him up for his next book which was a further five years of research. Both to serve justice for men who were long dead.

The first of George’s books centres on George Kelly and Charles Connolly, convicted murderers in the notorious 1949 Cameo Cinema Murders case. George’s meticulous research, alongside Lou Santengeli, led to the posthumous exoneration of both men in 2003.

Accused of murdering two men in an attempted robbery, both men protested their innocence. In fact, they protested that they’d never even met each other previously. As their trial hit a dismissal, they were tried again separately. At Kelly’s trial he was found guilty of murder and sentenced to be hanged. Connolly then entered a guilty plea to avoid the same fate and served ten years for the lesser crime of robbery.

Later, it was found that another prisoner had confessed to the crime. Neither man’s legal teams were informed of this and the statement was only discovered by Skelly and Santengeli in 1991. There was never any scientific or credible evidence against either man. No fingerprints, murder weapon, bloodstains or eye-witnesses.

Corrupt Detective Inspector Herbert ‘Bert’ Balmer hinged his entire career on the case. He rose to Acting Chief Constable and died before being held accountable for his actions. The Court of Appeal condemned him, however, finding he committed perjury, falsified evidence and obstructed justice.

George investigated further and uncovered an eerily similar case involving the disgraced Balmer. Occurring just around the corner from the Cameo murders, the Cranborne Road Murder was that of Beatrice ‘Alice’ Rimmer, in 1951.

Again, there was no evidence against the men convicted, Alfred Burns and Edward Devlin. However, they were convicted of the murder and hanged in 1952. As they too maintained their innocence up to the gallows, Skelly asserts it is clear Balmer followed the same patterns as with the Cameo murders and framed these poor souls.

George has attempted to have this case reviewed by the Court of Appeals and have the men’s convictions posthumously overturned. Presenting eleven bundles of undisclosed evidence and a new argument, it was rejected by the Criminal Cases Review Commission (CCRC), in 2008, despite them having backed his appeal in the Cameo case and that giving precedent. George maintains there’s enough people who know it’s an injustice and it should be overturned, saying, “I know for a fact they were innocent and it’s already been acknowledged by the Court of Appeals that Balmer was corrupt. I’ll keep fighting for their exoneration”.

So, what led to his latest release? As he hit his birthday, the pandemic caught up with George. Having been shielding, due to previous conditions, he attended the funeral of his last remaining sister. There, unfortunately, he succumbed to the virus, which left him hospitalised. It was touch-and-go but despite ‘compassion visits’ when it was believed he lay at death’s door, George fought to pull through. Now, doing his best to recover, George is on oxygen at home. This prompted him to tell his son that his one wish was that he’d published his novel. In an impeccable turnaround time, John had it published within three months!

The Most Familiar Face In the World

Whilst the publishing turnaround was fast, the writing turnaround was not. Beginning in 1968 and invariably being put to one side as George fulfilled other duties in his life, it was finally completed in the early new millennium. Inspired by The Catcher in the Rye and Salinger’s narrative style, The Most Familiar Face In the World focuses on a child named Sheridan. Set against the backdrop of the same post-war Liverpool George had described growing up in, it’s a look through the lens of childlike hope.

In the same way that Salinger himself was a very articulate man but had presented himself as an inarticulate teen, George wanted his narrative to accurately reflect that of a child. “Every time I was going to use a big word, I’d go back and replace it with a small word”. Describing himself as “quite unorthodox as a writer”, the novel is a hybrid of first and third person narrative, allowing a rare omniscience that allows the character to get closer to the reader.

While he was an unemployed labourer, George had an agent in London and the story was initially optioned to be published. However, he was unhappy with the amount of changes the publishing house had required, finding that “there’s too many hazards in the publishing world and self-publishing gave me the creative freedom I wanted”.

Bread on the Table, Fire in His Heart

While George held ambitions to be a writer, that wouldn’t bring any money in. Holding a varied career as a social worker, he worked for the council and inspected care homes before eventually leaving “because of all the bureaucracy”.

He then began working in the voluntary sector as Secretary of Kirby Voluntary Council. George spearheaded projects such as ‘Operation Green Finger’, promoting gardening for the elderly and disabled, as well as community enterprise in deprived areas. He even mentored an English student at the University of Liverpool, teaching her about getting published and how to improve her writing.

I have done a lot of voluntary work myself; I told him I enjoyed it a lot and he added, “It’s really admirable to undertake it. It can mean people breaking out of their situation, getting experience and getting a decent job”.

Featured Image Credit: Photo provided for use by John Skelly.