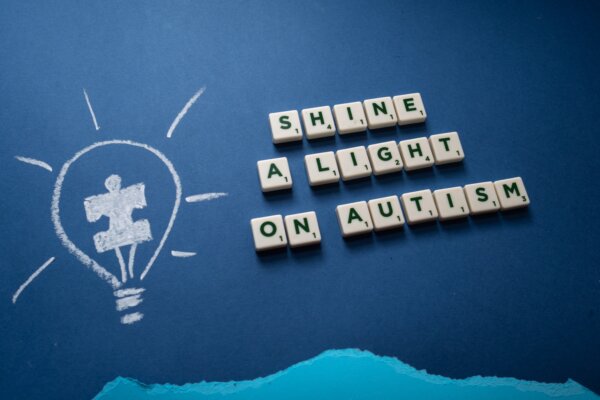 April means Autism Acceptance Month! Following World Autism Awareness Day on April 2nd, the month of April is devoted to education and fundraising. For example, Autism Together, a Wirral based charity, is hosting a challenge this month. In recognition of their 54th birthday, they want people to walk or run 54 miles throughout April.

According to the National Autistic Society, Autism is a lifelong developmental disability that affects how people communicate and interact with the world. One in 100 people is on the autism spectrum, which accounts for around 700,000 people in the UK. More males, at a ratio of 3:1, are currently diagnosed with autism than females.

Commonly, it can affect people when: processing questions, requests or instructions; meeting new people or being in unfamiliar situations; and there is a great deal of small talk, body language or unwritten rules used when people are engaging with each other.

However, this can cause people to flourish in areas where they can use attention to detail and intense focus, in thinking creatively, developing a considered and reflective approach or using attributes such as honesty and integrity.

I spoke to Elsa Smith, who was one of this year’s Student Officer candidates, about Autism Spectrum Disorder (ASD), how it affects her and why acceptance is still so important.

What was your diagnosis journey?

I was diagnosed with ASD just over 5 years ago now, by a psychiatrist. It started with my GP. I had an appointment for my mental health, and we began talking about my dad’s death. The doctor said, and I quote, “you talk about your dad’s death like you talk about cheese”. I can sometimes find myself speaking in a very factual way and without the appropriate tone. From this, my psychiatrist performed a situation verbal test on me. Then, I filled out a long written test, as did my mum.

How long did your diagnosis take?

It took only a few months to receive the diagnosis. I was already seeing CAMHS and a psychiatrist, due to my atypical depression. I received the diagnoses within a similar period. However, most people are not as lucky. If my doctor hadn’t recommended it, I would never have thought I had ASD. My mum didn’t think I did, even though in hindsight the signs were quite clearly there. To this day, my mum does not recognise the challenges I face. None of my family really understand ASD and how it affects me personally.

Why do you think that girls typically find it harder to get a diagnosis?

Not enough research has been done on it before and all the research that there is makes comparisons. Also, many girls seem to get diagnosed with social anxiety instead or sometimes even just called shy. I think this is highlighted less because of stigma. Women already face a lack of support for disorders that have been stereotypically male.

Do you think terms commonly associated with autism come with stigma attached?

‘High-functioning’ is not a term many people within the autistic community accept; it implies an easier time and separates us from others on the spectrum rather than uniting us. Asperger’s isn’t used anymore either because the founder, Hans Asperger, was a Nazi.

‘Neurodivergent’ is commonly mistaken as a replacement for autism. However, it is actually used to be more inclusive of those who have neurological disorders but aren’t autistic, such as those with ADHD, dyslexia and such. It helps those who want others to know that they struggle but maybe don’t want to disclose their full diagnosis. It also unites our community. In addition to helping those with multiple disorders, the comorbidity (correlation) between ADHD and autism etc. is extremely high. This allows for an ‘easier’ and more inclusive label.

How do you feel that your autism manifests and affects you?

I find I get overstimulated regularly; clothes being itchy and hair being distracting are quite common ones. However, I often find I struggle most with multiple noises at once: conversations when I am trying to work, multiple conversations at one time, loud noises and bright lights.

Tone regulation is particularly hard for me, and reading body language. My biggest struggle is definitely trying to understand my emotions and how to express them through speaking. A common misconception is that those with ASD are not empathetic. Some of us can have much higher empathy levels than those who are neurotypical though; I find this true of myself and it’s very, very frustrating. People will label us as not empathetic and insensitive just because of their misconceptions of ASD, especially in women.

I really need my alone time but I also feel quite lonely at times because I function differently from everyone. I find many neurotypicals judge too hard, talk too much or are too rude and uncaring of each other. Sometimes being around them can be exhausting. I’ve found those who are neurodivergent much easier and accepting of differences and struggles, etc.

Why is Autism Acceptance Month needed?

Awareness isn’t as important as acceptance. I don’t doubt even those reading this article are judging. People refuse to educate themselves or just ask us about our struggles.

My immediate family make an awful lot of jokes about my autism, creating stigma and shame. I feel as though I can’t publicly struggle. People do tend to stare at those exhibiting behaviour that’s a bit different from the norm. I see it a lot at our university especially. Ableist jokes have become commonplace and those who call them out are labelled as too sensitive. Rather than accommodate us, it feels like they would rather ignore us. It seems like we have to change and shape ourselves to fit the world, despite us being the ones struggling.

Does it make it harder being part of the disability and LGBTQ+ community?

Definitely. It’s a shame that even communities that are supposed to be inclusive still push us out. Many communities (especially the LGBTQ+ community, I’ve found) are accepting of some neurodivergences but not others, such as accepting ADHD but not autism.

Fortunately there is some overlap between the neurodivergent community and the LGBTQ+ community. I do feel I have a place there, however small the community sometimes feels. I do feel as though I can never fully fit into any group though, as I feel different from many other autistic people or the autism that is portrayed in the media.