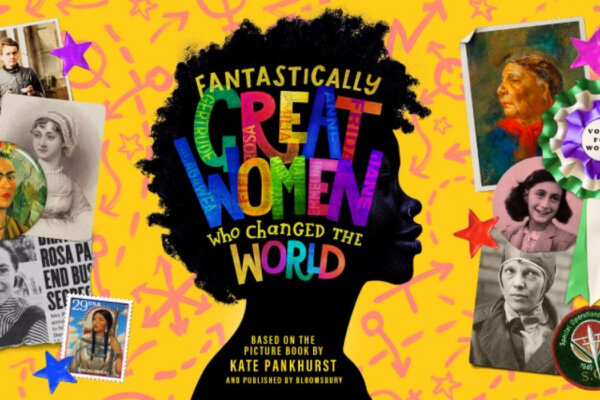 Suffragette descendant, Kate Pankhurst, has been writing children’s books since 2002 to empower future generations of young women. Her illustrated tales tell the stories of incredible women through history, from Amelia Earhart to Frida Kahlo to Emmeline Pankhurst. Kenny Wax Family Entertainment and MAST Mayflower Studios have brought to the stage her narrations in a brilliant pop-musical format with an all-female cast. The musical first entered Liverpool Playhouse Theatre on December 8th 2021. After COVID-19 caused cancellations, the play is set to return to the Playhouse on March 25th 2022.

The play follows our young heroine, 10-year-old Jade, and her journey to find adventure as she wanders off on a school trip. Along the way she meets female historical figures, like Jane Austen and Mary Seacole, who guide her through their own struggles. Jade relates this to her own personal turmoil.

Later, it’s revealed that the young girl’s distress is caused by her parent’s impending divorce. She feels unheard and patronised by the adults around her, claiming “I do what I’m told and I never get anything for it”. Chris Bush incorporates Jade’s frustrations which may be mistaken as a child’s tantrum, as a microcosm for patriarchal culture. Sadly, as every woman watching knows, Jade will go on to feel unrewarded and silenced further throughout her life. It’s a shame that this awareness of struggle occurs so early. However, this production serves as a reminder that rebelling and speaking up can be the solution.

By far the most impressive element of this production is the diversity of inspiring women the play has to offer. For every young girl’s aspiration, there is a song to encourage it. From aviator pioneer Amelia Earhart, to fossil historian Mary Anning, to super-spy Marie Christine Chilver, Bush certainly made sure to cover all bases.

The Introduction of Freida Kahlo

A personal favourite was the portrayal of Surrealist painter from the 20th Century, Freida Kahlo (Jade Kennedy). Kahlo entered the stage alongside novelist Jane Austen (Christina Modestou), in an inspiring appeal to young female artists. The emphasis on artistic expression as a voice for women was phenomenal from Bush.

Freida signifies to Jade of how art is still a worthy pursuit despite the surrounding stigmas. Whilst Austen stressed the importance of language: “writing words can get you anything”. Freida shortly came forward with “life doesn’t always fit together perfectly, sometimes you have to colour outside of the lines”. The artist then went onto explain how she was almost a doctor, but after an accident she was unable to finish medical school and in recovery began to paint. Bush does an excellent job of breaking down the stereotype that being creative doesn’t equal lack of intelligence or prospects. As Freida rightly says, “Find a space for it and don’t worry about where it takes you”.

Kennedy’s character promoted the creation of art to young women as a way of being heard. “Making art shows the world what’s inside you” is what Freida says to young Jade, in relation to her frustrations of feeling unheard. The inclusion of this promotes the work of female artists in yet another male dominated industry. The attempt to hinder female artists with the response that art is an unworthy pursuit is just another means of silencing. A lack of female perspective within art would mean that women would only feature in artwork through the male-gaze. Bush rightfully exhibits the importance of female representation through their own voices.

Consequently, the timing of the play’s release helped to emphasis the importance of the arts; a fitting last play performed before another lockdown.

As a direct result of the COVID-19 pandemic and injury meant that Fantastically Great Women Who Changed the World performed less than half of their planned shows. The play was cancelled in December 2021.

The theatre was fortunate enough to be supported by the Arts Council’s England Culture Recovery Fund to cover the loss of ticket income. Despite this, in the limited time on the Playhouse stage, the theatre saw more than 25,000 audience members to see this production.

Everyman & Playhouse CEO, Mark Da Vanzo explained his gratitude to the support: “We’re grateful for the support from Arts Council England and DCMS, and we couldn’t have delivered as many shows as we did without the hard work and dedication of our cast, crew and staff…We’re thankful too for the understanding and generosity of our audiences.”

Thankfully, the show returns to the Playhouse in March for those who didn’t get the chance to see it before Christmas.

Post-Show Discussion: Questions with the Cast

After the show, the cast proceeded the take questions from the audience.

Q) “Don’t you think the musical is like Six The Musical?“

A) Christine Modestou, whom also starred in Six alongside Renée Lamb, responded adamantly that the musicals are nothing like having starred in both. Unlike Six, Fantastically Great Women explores women from every background and there’s no direct link between them. Alternatively, Six explores the women linked to Henry VIII, explaining their own stories beyond their marriages.

Q) Another audience member asked, what was the cast’s favourite part of the production?

A) The cast referred to the musical as still in its’ “absolute infancy” and said that they “wish they had something like this when they were younger”. In addition, Frances Mayli McCann said her favourite part was playing Agent Fifi, aka Marie Christine Chilver. She claimed she had “a free space to make her up and [her] interpretation of Fifi changes every night as not many people know about her”. McCann said the play is about “capturing the essences of the women, not creating exact replicas”. (In the 2022 staging of the production, Kirstie Skivington will replace McCann).

Furthermore, the cast collectively agreed that the scene between Jade, Rosa Parks (Renée Lamb) and Anne Frank (Christina Modestou) made them all cry on first viewing. Agreeably, the song from Parks did emotionally grip the audience like no other in a brilliant way to conclude the show.

The cast further discussed societal progression. They shared that a statue of Mary Seacole, (played by Renée Lamb), will be resurrected in Liverpool’s St George’s Hall in 2022. This is actually the first statue of a black woman in the UK.

Q) “What were your main influences in characterisation?“

A) Discussions took place about being a young woman and female identity before rehearsals began. The cast highlighted how the musical misses out disability representation. Furthermore, they explained that they are constantly trying to better their knowledge of the social issues their characters faced to keep improving their performances.

Q) My question went as followed: “How did you go about tackling the tragic deaths of some of these women? I noticed that it was avoided, but some of their achievements did result in their deaths. E.g. Emmeline Pankhurst or Marie Curie. But obviously with the audience’s age, it’s a difficult subject to discuss.“

A) The answers were quite remarkable, for this question all of the cast collectively chimed in. They stated that all of the historical women in the production struggled with expressing their skills and talents. No matter if their actions resulted in fatality, it doesn’t make anyone’s struggle any more or less. The play promotes the actual accomplishments of these women, rather than defining them by their demises. The actresses also highlighted how they aren’t playing the exact role of these women, but more of a stage embodiment of their successes. Bush represents historical women at the height of their achievements.

Brilliant for all ages, this production aims to educate and inspire a new generation of young women through retelling the strength of these Fantastically Great women. This play is a reminder of the cultural progression made by powerful women. At the same time, it recognises that there are still developments to be made. Rule-breaking and rebellion are encouraged, demonstrating what women are capable of achieving if boundaries are pushed. After all, well-behaved women never did make history.

Fantastically Great Women Who Changed the World returns to Liverpool’s Playhouse from 25 March to 2 April 2022. Tickets on sale from midday on Tuesday 18 January, prices range from £10 to £25. More info and bookings available at https://www.everymanplayhouse.com/whats-on/fantastically-great-women-who-changed-the-world.