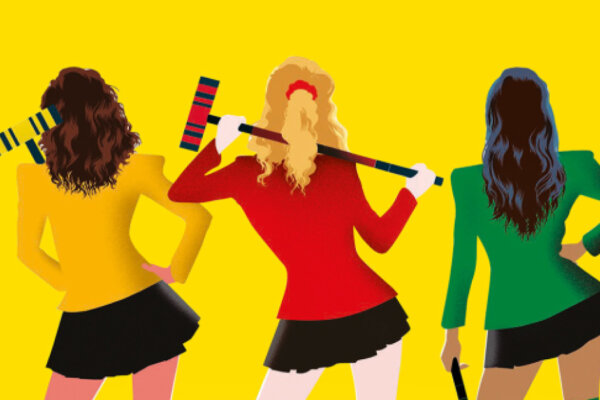 Croquet mallets at the ready! The 1989 black comedy and cult classic ‘Heathers: The Musical’ has been given an all-singing, all-dancing 21st-century makeover… how VERY. Contributor Naomi Adam reviews its run at the newly reopened Empire Theatre.

Do you like your stage shows mean, teen, and- if you’re Heather Duke, at least- green? Answer ‘Yes!’ to two or more of the above, and chances are ‘Heathers: The Musical’ is for you.

Based on a cult 1989 flick of the same name (which united the acting juggernauts Winona Ryder and Christian Slater in a bouffant-haired heyday), the action unfolds among the cafeteria cliques of Westerberg High, Sherwood, Ohio. Though let not that name deceive you. Think less Band of Merry Men and more Gaggle of Gossipy Girls. For sitting pretty (and oh-so aware of it) at the top of the school’s rigidly defined social hierarchy are a trio known, reverently, as ‘The Heathers’. With their almost identikit co-ordinated kilt combos, and their almost implausibly identikit names- we have Heathers Chandler, Duke, and McNamara- they maintain a reign of terror over the rest of the student body. Other hobbies include playing vicious games of croquet, and sporadically pronouncing their catchphrase: ‘how VERY’. Their alternative gang-name (as the show’s lyrics would have it)? ‘The Lipgloss Gestapo’.

Protagonist, and self-confessed ‘Nobody’, Veronica Sawyer then opts to Sellotape herself to these fashion-forward fascistas in a bid to survive the back-biting world that is high school. After which, Enter: stage left, A Boy. Some smooching, frozen slushies, and ‘Ich luge’ bullets later, and her ‘teenage angst has a body count’. The agent of this chaos? Brooding Loki-Lothario JD. So bad, he doesn’t even do names… Well, it worked for H from Steps.

Overall, ‘Heathers: The Musical’ is like a proto-permed Mean Girls meets Bonnie and Clyde…with harmonies.

Pretty tight ones, too, as it happens. Considering the film original features essentially a single song-Doris Day’s ‘Que Sera, Sera’. Laurence O’Keefe, Kevin Murphy and the music production team have done a laudable job in penning over 20 extra toe-tapping tracks specifically for the show. These include ‘Beautiful’, ‘Candy Store’, ‘Dead Girl Walking’, and the irrepressible ‘My Dead Gay Son’ (which there will be more on later). One audience member, leaving the venue, told her friend she wished she’d never heard the show’s song before as she wanted to appreciate them afresh.

However, while there was not a bum note among the cast, there were a couple in some of the song’s lyrics. ‘Nerdy’ pronounced quasi-American style to rhyme with ‘dirty’? Er, let’s just call it poetic licence…

Shooting a Scene: Slater and Ryder in a still from the 1989 film, dir. by Michael Lehmann

Interestingly, Heather D’s bulimic episode is treated with a touch more compassion than seen before. JD’s flurry of shots in the cafeteria turns into a kung fu-inspired fist fight instead. The dads of two dead gay jocks celebrate, not ridicule, their sons. Cue ‘My Dead Gay Son’, and the stunner of a line that is: ‘They were just two stray rhinestones on the Lord’s big purse!’. Add a rainbow-patterned tie and braces, and some flamboyant shimmying, and the Scouse crowd were in uproar- in the best possible way. Move over Manchester Pride: there was a mini version going on right there on the Empire stage.

Putting the Fun in Funeral: The cast enact history’s most joyful funeral

Other tweaks to the original included altering the trajectory of the Veronica-Heather (-Heather-Heather) friendship, rendering it much more believable. Innovative freeze-frames during key scenes also proved, like the cast, a triple threat. It provided plot background, added comedy value, and lead Veronica (May Tether) engaging with the audience via fourth-wall-busting narration. It was impossible to tell that this was only the third performance the former understudy had been given (well, until you stalked her on Instagram as a student journo reviewing the show, that is). Nothing green to see here but the green room… and Heather Duke (assigned the Dipsy role in the teen-Teletubby line-up).

It’s always going to be a task to shift from screen to stage. Heathers: The Musical’s technique relied upon what those with a love for dictionaries are calling ‘ekphrasis’: the cast’s verbal description of action taking place offstage. Twinned with some choice sound effects, this was the solution to bringing the film’s scenes of pool parties and cow tipping (teen entertainment before the age of the Internet) to the boards. A balcony level boosted the staging, too, allowing ghost characters to crow from above at the living below (although you may have suspected that Queen Bee-atch Heather Chandler was headed in the opposite direction…).

What we did get to see on stage, though, was a multi-talented all-singing, all-dancing, all-acting cast bringing some much needed sparkle to our tentative post-lockdown lives. Alongside this, the show also brought serious rainbow power to an ’Eighties black comedy in need of an update’. Heathers: The Musical’s two hit West End runs and wildly popular national tours are no surprise- unlike the musical’s explosive, sound effect-heavy showdown. More pc, JD? Absolutely. How VERY.