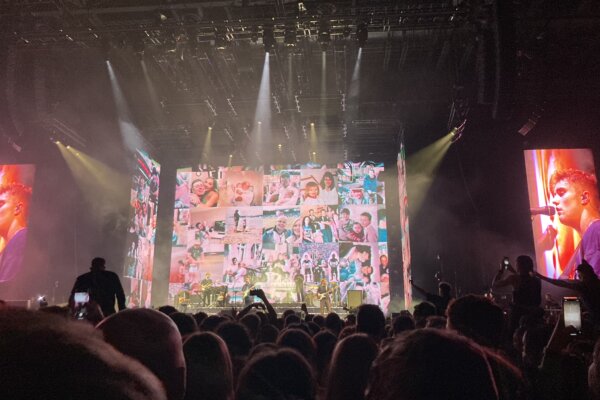 Way back in October, my friends and I managed to get tickets to see Sam Fender on his UK/Ireland tour, following the release of his Seventeen Going Under album. The second night of Sam Fender’s arena tour on Monday was the ultimate celebration of northern culture and indie music – the Geordie icon did not disappoint!

Warming up the crowd before Fender came on was Goat Girl, a post-punk quartet from London. By the time we had visited the merch stall and found our space in the growing crowd, their set was gathering momentum. Goat Girl brought a chilled vibe to the venue whilst also getting us pumped for the night ahead. I’ll definitely be adding their music to some of my playlists!

Before we knew it, the static, white noise of Fender’s Will We Talk filled the arena as the crowd came to life, welcoming him and the band onto the stage. This electric opening was swiftly followed by Getting Started, before we all slowed down a bit to enjoy some of Fender’s more mellow tunes.

After a while, Fender encouraged those who wanted to mosh a bit harder to move forward, as he prepared us for Howdon Aldi Death Queue and Spice, two of his rowdier songs. I was a bit nervous at this point, as I didn’t really want to get separated from my mates or involved in a massive mosh pit. However, from the amount of people moving forward we were left with plenty of space to dance in our original spots – this was much more to my taste than a sweaty mosh pit.

A rather sentimental moment followed, as Fender performed Spit of You, dedicated to his father and how similar they both are. While this was sung, a collage of pictures formed behind the band, creating a moment that moved the whole crowd.

Although I didn’t want the gig to end, the encore was my favourite part of the night, as I jumped on my friend’s shoulders (shoutout to Nathan) to experience my favourite song of Fender’s, Saturday, from above. It was honestly one of the most surreal moments of my life, as Fender encouraged the crowd to take over singing, and the arena filled with our voices alongside his. The energy only carried on growing, as Fender followed this with a performance of the titular track off his album, as well as Hypersonic Missiles to finish off the night. By this point the whole crowd was crazy, as we ended the night jumping around to Fender’s most popular songs.

I feel that it should be mentioned how both Sam Fender and Goat Girl paused their sets to help distressed members of the crowd, before picking back up seamlessly, creating a safe and enjoyable atmosphere for all.

Although I don’t see how Fender could possibly top his night at the M&S Bank Arena, I will be hoping to grab more tickets next time a tour is announced.  Almost a week later, I remain mesmerized by Sam Fender’s voice, stage presence, and heartfelt songs.