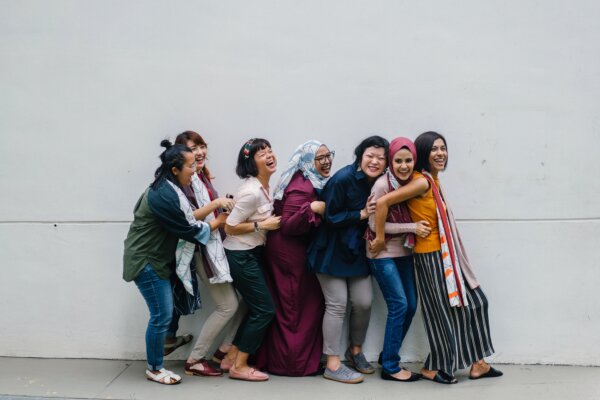 We are all eager to hear from our new Student Officer candidates ahead of the election. It’s Women’s History Month and I’ve been inspired to look more closely at female power. We heard from them about their campaigns this week, but I thought a great way to gain some insight on our current contenders personalities was to ask them which women inspired them the most. With Mother’s Day around the corner (Sunday 27th March), it seems like they are feeling the vibe! You can vote here, voting closes at 2pm today, so hurry.

My mum. She is the most inspirational woman I will ever know. She grew up in Ghana without a mother and father and had little to no opportunities. Although her mum was not around to show her how to be a mum, she became the best one. She moved all the way to a new country, to build a new life – with bravery and courage she stood strong against xenophobic and racist rhetoric and systems. When society told me that my skin, my hair, and my body were not good enough, it’s my mum that uplifted me and sculpted me to be strong and confident. Without a doubt, my mum is brave, strong, and selfless. I will forever be proud to have her as my mum and will forever dedicate my life to her and the family she created for me.

I feel I cannot simply choose one woman who has inspired me, as there are two who come to mind.

One is my mother, who is a single parent and has raised 3 children with little support and not a lot of money. My family lost my father suddenly to a cardiac arrest in December of 2015. Following this my mother developed severe PTSD and depression. Despite this, she still tried her best to support my family during our time of grief, which continues to this day.

This leads me on to my second woman, me. Whilst this may seem weird at first, during this time I had to support my mother and my younger sister too. There were times when my mother could not function; despite being 12 years old and grieving my father and best friend’s death, I continued to try to support my mother, maintained my good grades, and grew as a person. There were many times when I suffered, especially after finally being diagnosed with atypical depression, also known as (chronic) major depression (in my case). Not only did I have to deal with this, but I realised my mother did too. After losing her loving husband, she now had to cope with a daughter who was suffering too. I will always be thankful for this.

In 2017, I was diagnosed with ASD (autism spectrum disorder). This was incredibly difficult to accept. I faced many people telling me I could not have it, either because I seemed, “too normal” or “don’t be silly, girls do not have that!” This made me struggle with my identity even more, after being surrounded by a lot of homophobia, ableism, and sexism. I felt out of place, and I felt like I was not doing enough because I was always so drawn to helping people, but I was struggling to even help myself.

Now, I can confidently say I am well into recovery. For the past few years, I have attended many protests, worked for a few charities, and raised money and awareness for various causes close to my heart. I vow for the rest of my life to not allow others to suffer in silence. No matter what their issue is, I vow to help, and implement help, to make the world a better place.

Dolly Parton does not just have an iconic voice, image, and stage persona, she is also an icon for all. She inspires, encourages, and supports everyone, from all walks of life, regardless of sex, gender, or race. Throughout an illustrious career of hit singles, number ones and working nine to five, she has always, and continues to, support individuals through literacy schemes, reducing the number of educational dropouts, support for mental health and most recently, donating one million dollars to Covid vaccination research. Dolly is a champion for education, environmental conservation, and the welfare of all. If elected, I would embody these characteristics and continue that tenacious mindset with students at the heart.

This may be a cliche answer, but the person who has inspired and supported me my entire life is my mum – my absolute rock. I attribute my successes and achievements to her. All the late shifts, over time and sacrifices she has made all my life cannot be quantified. She has been there for me during the worst and best moments of my life, which is why I consider her my partner in crime and sometimes my bank account. I cannot wait to make her proud!

Mikaela Loach inspires me due to all her work fighting for climate justice. She took the UK government to court last year, and although the case lost, she looks for hope in the movement. She has made me question the systems we live under and educate myself on alternative futures. I stooped being passive in my beliefs and took action after listening to her and Jo Becker’s podcast.

There’s not one woman or a set of women that inspire me, every female I see doing amazing things inspires me.

The girl walking to her 9am struggling through a hangover because she needs to find a balance inspires me to find a balance. To my friend that shows me constant kindness, as if I was her little sister, inspires me to be kind to others. The one female lecturer I have, that stands out as an example to the female students on my course, inspires me to stand out. The YouTuber that talks about her issues to help others and help herself inspires me to speak up. The women that fought so I could be here today, be in the running to be a leader inspire me to fight harder.

So yeah, every woman around me, and every woman in history, I’m in absolute awe of and infinitely proud of. You inspire me to be me.

How do you even begin to pick just one inspiring woman? There are so many incredible, empowering women that have inspired change throughout history: Angela Davis, Simone de Beauvoir, Olive Morris, Audre Lorde and many more. Yet, there is one woman in particular, who seems to have been somewhat forgotten, Barbara Beese.

This extraordinary woman was part of a group known as the Mangrove Nine. On the 9th of August 1970, they took to the streets of Notting Hill to protest police harassment. The beloved Mangrove Restaurant was a crucial hub for the black community in Notting Hill. However, in a period of six months it was raided twelve times by the police. It was during this protest that Barbara Beese, a well-known activist in the area, and eight others were arrested and charged with ‘incitement to riot.’

Despite, the potential lengthy custodial sentence, Barbara did not plea guilty (as she was advised by her lawyer). She was determined to expose the racist attitude embedded in the police and judicial system. Her priority was bringing change that would leave her five year old son, Darcus, with a better future. The case was taken to the Old Bailey and proved to be a ground-breaking trial, that led to the first ever judicial acknowledgment of racially discriminatory activity in the police.

When I first learnt of this story, I was astonished. Barbara one of two women in the Mangrove nine has provoked such a huge and fundamental change in British law. Her courage, strength, and determination to fight and unite against racism, proved to be monumental. Of course, racism is still existent within the police, law, and society today. But Barbara and the other eight accused, fought for Black people’s rights in the UK and brought about huge progress. She inspired her peers and younger generations to speak up, especially about police harassment. Don’t forget her name because Barbara Beese is truly an inspiring woman.

A woman I find very inspiring is Mary Seacole. A Victorian era nurse who, though she faced discrimination throughout her life, persevered to do good. Upon the outbreak of the Crimean war, Mary Seacole travelled to the UK, at her own expense, to volunteer her services to help save lives and prevent suffering. However, the prejudice she faced meant her application to help the famous nurse Florence Nightingale was rejected.

Where others might have quit under the circumstances, Mary Seacole was determined to help others. Again, at her own expense she travelled to the Crimea and set up her own hospital with loans from friends. There she treated the soldiers, providing a place of warmth and comfort to countless fearful people, saving many lives.

Upon the war’s conclusion she had to abandon the hospital and return to London. She was saddled with debt and had nowhere to go. Only with the help of a newspaper reporter she met in the Crimea, did she manage to recover and have her good deeds get the attention they deserved. Her relentless striving to help others even at her own expense, all the while facing discrimination due to sex, race, and class, is incredibly admirable and should be an inspiration to everyone.

A woman I am inspired by is Rosa Luxemburg. She was an anti-imperialist, anti-war as well as helping fight for the freedoms of the working-class and women. She constantly stood up for what she believed and fought for a better world.

For me, my mother and my sister are the inspiration. From my childhood, both of them taught me how to overcome my fear of expressing myself and how to be friendly and respectful to others. They supported me in every best moments of my life.

I came across a number inspiring people in different phases of life. The person who is the gratest inspiration to me is my mother. She’s a hardworking woman who face all problems with a smile on her face. She always supported me towards my dreams and goals. She taught me to work hard to achive them and never loose the hope. She’s the kind of person who cares for everyone and gives more than she receives. I try to follow her footsteps and want to make her happy with my success.

I want every girl to know that her voice and action can change the world. I’ll give you one perfect example, which is our mother. A message from my heart; I can’t imagine a world without women, and the mother is the most important lady in anyone’s life. Mothers are the ones who love and protect us from the moment we are conceived. They are the most powerful and capable ladies we have ever encountered. In the real world, no matter what, or where it is, from any career to any family, any difficulties to household chord, as a woman, Mom is really amazing how she manages everything so easily and is supportive in all positions.

At this particular time, wish your mum a very happy Mother’s Day. This Mother’s Day 2022, we have a range of women’s day greetings for you to give to your mother. Whatever you name her: mom, mother, mum, ma, or mama, wish her a very happy Women’s History Month and celebrate her existence!

Cover Photo by mentatdgt from Pexels