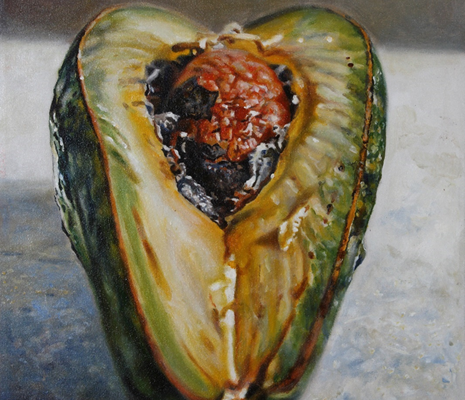 Jerk of Art: ‘Jamaica Making’ Exhibition at the VG&M | REVIEW

The VG&M’s latest exhibition showcases seldom-seen pieces of contemporary art which depict a Jamaica beyond beaches, Bolt and breadfruits.

Jerks of Art: A view of the entrance to the exhibition in Gallery 6

If you see the word ‘Jamaica’ and you’ll likely conjure up images of picturesque, platinum-sand beaches, superstar sprinters, and delicious nosh including breadfruit, ackee, and the island’s infamous jerk chicken. Each of which are subjects explored in the collection of over thirty artworks that form the Victoria Gallery and Museum’s latest exhibition, ‘Jamaica Making’.

The thirty-plus pieces have been loaned from the private collection of Jamaican-born philanthropist and entrepreneur Theresa Roberts, providing unique insight into the island’s post-independence art scene.

There’s lush oil-on-canvas landscapes by the likes of Kapo and Albert Huie, widely regarded as the founding father of contemporary Jamaican painting; plump treefruit in still-lifes like The Core (2011) and the intuitively-titled Breadfruit and Ackees (2005); Bolt and Powell’s legendary 2008 Beijing Olympic-winning relay forever immortalised in Vibrations (2009).

Yet there’s also less expected subject matter, which challenges Jamaica’s reputation as a tourist idyll. Some pieces reflect on the lasting legacy of colonialism since the country achieved independence 60 years ago. The floridly futuristic 2 (Fat Cells) [2009], by 22-year-old Monique Lofters, explores a societal preoccupation with social media. An entire ante-room is devoted to a cluster of paintings by female artists, many of which overtly critique the island’s rampantly misogynistic culture.

Kristina Rowe’s 2009 The Assets is particularly striking, melding word with image to interrogate the appropriation of the female form. As the artist herself has elaborated: “This work centres on the idea of women being whittled down to their bodies and their seductive nature”. Additionally, the artwork is arranged thematically rather than chronologically to helpfully encourage comparative dialogue between the pieces. Rowe’s work, for instance, is placed alongside that of Ebony Patterson, whose mixed-media images convey a similarly feminist sensibility.

And it’s not just painting on offer at ‘Jamaica Making’. There’s also photography and film, as well as, in three dimensions, sculpture in wood and metal.

As a final flourish, the artwork in both rooms has been placed against backdrops of black, green, and yellow: the Jamaican tricolour. This exhibition of private pieces rarely offered for public viewing is certainly proud to, ahem, flag their island heritage.

The exhibition ‘Jamaica Making: The Theresa Roberts Art Collection’, is at the Victoria Gallery and Museum until 9 July 2022. FREE entry. For further information about patron Ms. Roberts, visit www.art-jamaica.org.