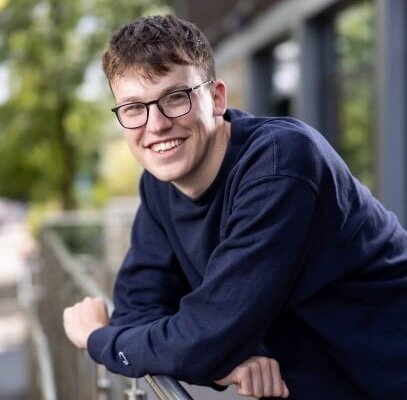 It’s Student Officer Elections! You can read the candidates manifestos and vote for them all week, 9am 21.3.22 – 2pm 22.3.22, via this link. Following the interview with Adnan released yesterday, I caught up with current leader, Bertie, for his opinions on leadership and how the newly elected officers will be able to find their feet.

You may have seen this guy around campus, in videos from the Guild or in photos with the other student officers. At six foot and four inches, he’s hard to miss and he does consider it an advantage. Who is he? He’s our current President, of course – Bertie Woodcock. Hailing from West Sussex, Bertie studied an undergraduate degree in Business Economics at the University of Liverpool, graduating shortly before he began his term as President. He’s decided not to run again, instead opting to look for a job in sales. He’s keen to use the skills he developed as President, choosing “schmoozing as a career path” in an area such as sustainability or policy development.

Standing in the Election

I asked Bertie why he had chosen to run for Guild President and it became clear, it was destined. He had been building to the moment he took the presidency of fifteen years prior. Although, he was only successful on his second attempt at running.

When I was eight, I ran for school council and said to my teacher, I want to do this. It was Year Four, I told the teacher I wanted to do this at university and she said, “oh, you can do that, that’s a thing”. So I turned up at twenty-three and said, “alright, I’ll give that a go.” Fifteen years later, it came true. For me, that was the dream.”

I said it made sense that he had tried again, after all, it was his dream. He agreed that when coming sixth on his first run, it was as if the people told him, “we don’t want you!” and he said, “no, you do, you’ve made a mistake!” and proved them wrong by winning. On reflection of both runs, he believes he learnt from the first and was better equipped for the second.

It was a Covid election, it was very different, the style, the way it was. It took a lot of adjustment. I won it because I understood the game, that’s what happened there. The majority of people who win were previous officers or had run before. Purely because it’s a weird game. Large scale schmoozing.

How to Win Friends and Influence People

I voted for Bertie to be President but freely admitted to him, I couldn’t remember what any of his policy suggestions were. I had voted for him because he made a funny video and he seemed like a nice guy. Turns out, he is a funny, nice guy.

That’s exactly what I wanted. My whole campaign idea was to get people to vote who didn’t know why they were voting for me; I hoped they’d think, “that guy seems weird and funny.” So, I guess you were exactly my target market.

I didn’t really have a campaign team. There was my girlfriend, who is a huge support and my family and supportive friends. I said to them, I didn’t want people to vote for me who were interested in my policies, I wanted them to think, “this guy is like us and I think he can do the job.”

When I asked if he even remembered his original policies and he said they’d been somewhat swept up after taking the job. He had policies on rent, gym and AU fees, which he says he achieved nothing on. His policy also covered Covid, which he believes he achieved some things on.

Whether I got my policies done, I don’t know but I think if you look at everything we have done this year, overall, I don’t think students would be upset with that. I think that’s the job of the President – to steady the ship, to make sure that the normal student experience continues when it’s under attack. The Vice Presidents and Deputy President do the stuff that really makes a difference in the long-term. If I just did the policies I really wanted to do, people would hate me.

It’s been a hard time for everyone, through Covid and the ensuing lockdowns and restrictions. While Bertie took his presidency on the tail end of it, did it make it a tough time to be President?

I think it was worse for Adnan. I think if I said to him I’d had a really difficult time, he’d say, “what are you talking about?” He’d be right, I haven’t had the time he had. I remember saying to him, “you’re gonna be the Covid President and I’m gonna be the guy after Covid.” In the Guild, that’s how our years will be remembered.

Coming out of Covid, there’s been challenges, like Omicron, getting people boosted and hybrid learning. I think the decisions we’ve made this year will define at least a decade of teaching. I’ll come back here in twenty thirty-something and I’ll see the trademarks of what we’ve put in place today.

Adnan had the toughest time, I think since the forties, since war time. In nineteen thirty-seven, the President went to go and fight in the Spanish Civil War. I think he had the hardest time since then.

There Has to be Rain to See a Rainbow

Everyone has a highlight. Something they are most proud of. For Bertie, his highlight stemmed from his work around Covid.

My highlight was when the decision was made that a minimum of seventy-five percent of teaching for this semester and next year would be in person. That was a U-turn by this university that was directly impacted by what we did.

There’s never instant achievement in this job. You know it’s coming. We didn’t shout about it because some students would be like, “well, I didn’t want seventy-five percent.” That’s the weird thing about this job. You can never really say, “we did something.” Someone will always disagree. Even if that is what I’m doing right now.

With all the stress and highs and lows in this job, I wondered if Bertie would advise other students just not to do it. While he joked it could be that, he resolved that people should go for it but do it their own way.

Adnan had a horrible time but he could still leave proud of the changes he did make.

For Better or Worse

It’s well reported that in any form of election, you need to be resilient. Student elections are no different. Having experienced the dreaded election week when losing and when winning, Bertie knows this all too well. His advice is just to keep sticking at it, even though election night will be the worst of your life.

I didn’t cry during the election. I remember though, both Wednesday evenings, just wanting to. Imagining just curling up in a ball and for everything to go away. On one of the nights, I’d definitely won by that point and one of them, I’d definitely lost by that point. You never know which way it’s gonna go, just keep going. You’ve made yourself proud anyway. Your ego is already gone, don’t worry about it.

Was it Worth it?

Let’s be honest, while having a purpose, achieving goals that really make a difference for students and having an instrumental role are critical, the best thing you get from being a student officer is the skills. This position has undoubtedly given Bertie new skills and developed the ones he already had.

No question. This is almost like a free ticket to figuring out what you’re like in a workplace. I’ve definitely improved my skills as a colleague and working together with people. I’m less stubborn than I used to be, that’s for sure.

While Bertie has faced criticism for not appearing to be on the front lines, that isn’t a flaw. Speaking to Bertie fills you with an instant calm and his leadership style is to quietly negotiate to get what he wants. He said recently that his greatest strength is to be able to sell someone an idea and convince them it’s their own and I think his legacy will prove that to be true.