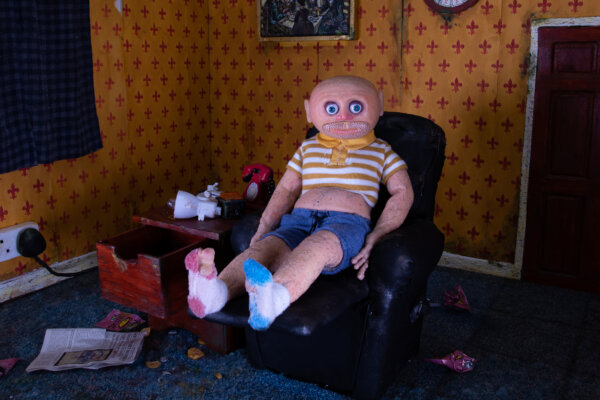 The BFI Future Film Festival celebrates the best and brightest of upcoming talent within the film industry. This year, Liverpool’s own Georgia Madden took home Best Animation for her short film Divination Dave.

Only 20 years old, Georgia graduated from the BFI Academy in 2017 and has produced two previous shorts: Oh The Places You’ll Go and Never Eat Shredded Wheat. Georgia’s witty humour and talent as a stop motion animator really shine through in her latest production. Divination Dave was commissioned by BBC Arts, as part of their New Creatives programme. The film is described by Georgia as a dark comedy, following a coach potato, who goes on a journey of accidental enlightenment.

Divination Dave is available to watch for free on the BFI Player until 03/03/22.

How did it feel to win Best Animation at this year’s British Film Institute’s Future Film Festival?

Well, it just felt unreal to be honest. I’m used to just working in my spare bedroom, so being in a huge venue like Southbank and seeing Divination Dave on the big screen with everyone, I was absolutely blown away. Everyone was just so lovely and supportive, and the amount of talent in that room, it was incredible. It really was an honour to be chosen, I was not expecting it whatsoever. I think I was in a dream-like state when I was walking up there.

This film is quite an abstract piece. Where did the inspiration behind it come from?

Yeah definitely, it’s weird to say the least. It was a challenge for me. I wanted to make a short film that was just one person, in one room because I knew that I was kind of limited just working by myself as it was over lockdown. I was trying to be realistic. The inspiration came from, not to spoil the film for anyone that hasn’t seen it, a weird Google question. I wanted to see what would happen if you ate a salt lamp. And Google could not answer it for me, so I had to come up with my own story about what would happen. It was partly a challenge, partly weird, morbid curiosity.

Would you say this is where most of your film inspiration comes from?

Yeah, I tend to look for things that interest me creatively, I go down weird rabbit holes. Like at the moment, I’m researching a lot into lizards and Elvis as part of my new project! So, if something sparks my interest, I just tend to go down that rabbit hole and see where it takes me.

As an animator, how did the pandemic impact your production process?

It gave me a reason to get up in the mornings in a way. I quite like the routine of being able to get up, go into a back room and make something. It made me feel like I was being productive during that strange time. But I suppose I was fortunate in that way because, had it not been for the year we had; I don’t know that I would have been able to get it done in such a short space of time. It really was like a nine-to-five, but it got me through lockdown and kept me sane… in the strangest way possible.

How long did the film take to make?

When I decided I would start, there was about 7 months where I was making the set, the puppet, all the tiny little crisp packets and everything. I was just taking my sweet time in a way, I really enjoy that, my favourite part is the making of things. So, if I could just make tiny crisp packets, I would do that all day! Then in January 2021, the BBC got back to me and were like “Hi, we would like to commission this.” It just came out of nowhere; I was not expecting it. But yeah, that was when I kind of had to get into gear. I had a four-month window to shoot, edit and finish the production in. But thank God I had already gotten started on the puppet and props etc, because I was pretty much ready to go from when they said that wanted to commission the film. So, it was about a year in total.

Do you think you will stick to animation, or do you want to dip into some other forms of filmmaking?

I just love creating things, full-stop. I come from an art and design background. So, the reason I think I love stop motion so much is that I get to do a bit of everything. I get to make all these characters and their little worlds. I always loved films all my life, I’m a huge film buff. So, for me, I’d be happy to work on everything, I love making props from live action. But for me personally, I think my projects will always be stop motion, its something I love doing and love making. I get to kind of be the God of my own little world I suppose (laughs).

Are there any particular filmmakers that have inspired you?

Yeah, I mean there’s so many incredible stop motion animators out there. Coraline, when I went to see that I think I was about 8 years old. When I saw that at the pictures for the very first time, it was just a lightbulb moment for me in terms of stop motion. I went into a huge rabbit-hole of looking at how everything was made. Obviously, Nick Park and Aardman are just huge British icons for everyone really. In terms of live action, I love David Lynch and all his weird stuff, that always inspires my animation.

This film feels like quite an abstract piece. As a filmmaker, would you rather focus on themes that have that darker edge to them, perhaps leaving the film open to the audience’s own personal interpretation?

Yeah definitely. Like I say, David Lynch is such a huge inspiration for me, and I think he’s the master of that in a way. I do like to leave a lot open for interpretation. It’s always fun to see what people take from things and I suppose I like to subvert animation in a way. I think a lot of people associate it as being something for children, so I like it when I can showcase animation’s wonderful, weirder side.

What advise would you have for any young, aspiring filmmakers?

I’d say its just about getting your face out there in a way, just get known. Even if it is online, and you’re at home most of the time like me, there’s so many events and virtual festivals you can go to. And you’ll see it’s its own little world, you’ll run into the same people over and over again and you’ll get to know faces. I’ve been to quite a few festivals, both online and in person. I run into the same people again and again, you get their social medias, and you find out more about them. It’s all about connections. You don’t have to, but it’s always good to get your face seen and known.

How has being from Liverpool influenced you as a filmmaker?

I feel really lucky to be from Liverpool. I’m super proud to be scouse, and I think its such a wonderful community. Everyone kind of backs Liverpudlians, we’re all such a supportive bunch, so it’s very inspiring being from Liverpool. We’ve got such a great music scene as well as a film scene that I think is definitely coming up now. You’ll see Liverpool being used a lot in film as different places, like New York. But I think it’s really exciting now that we’ve got these studios coming up. I think it’s a really exciting place to be at the moment.

What does the immediate future hold for you?

Well, at the moment I’m trying to come up with a script for my next animation. It’s a very long process when you’re in pre-production in animation, as you have to really nail everything down and know exactly what you’re doing. I’m at the stage now where I’m researching and trying to find ideas. So, that’s what’s happening in my own little stop-motion world but, in terms of Liverpool, I’d love to get into the film scene. I’m always on the lookout for work and opportunities.