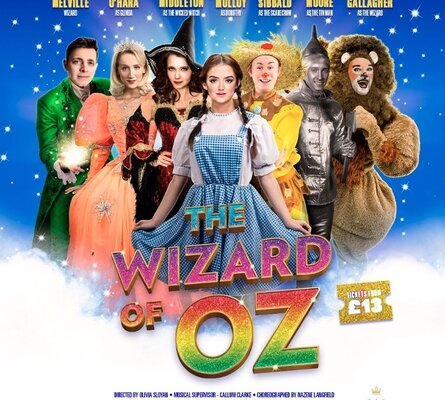 Oz and Us: ‘The Wizard of Oz’ at St Helens Theatre Royal | REVIEW

What?: ‘The Wizard of Oz’ Pantomime

Verdict: Prepare for audience participation extreme in a tradition-defying February pantomime that doesn’t so much break the fourth wall as launch straight through it

‘We’re not in December anymore, Toto!’

Well, that may be so, but it hasn’t stopped St Helen’s Theatre Royal from ploughing ahead with their tradition-defying February half-term pantomime, The Wizard of Oz.

And it’s ploughing in the literal sense, as the show opens with lead Dorothy in Kansas, preparing for harvest-time. She’s joined barn side by a bevvy of gingham-clad milkmaids (they each have a ‘K’ emblazoned on their aprons, just so you’re sure where you are if the twangy accents aren’t a giveaway), plus pals Hickory, Dickory and Doc (human) and Toto (animal)… and, pretty soon, a giant twister.

This meteorological menace is conveyed ingeniously by means of a digital screen and ominous music. From there, we spin into the story proper, as Dorothy and Toto find themselves transported to the wonderful world of Oz. (Cue: Munchkins.) Given that the 1939 Wizard of Oz film (based on L. Frank Baum’s 1900 novel of the same name) is purportedly the most-seen movie of all time, it’s a story that most will be familiar with. It proves as simple and satisfying as your average paint-by-numbers: follow the yellow-brick road, overcome evil green witch, tap three times with shiny red slippers to return home.

A perfect, heartwarming plotline for a family pantomime. (If, unlike poor Tin Man, you’re lucky enough to have a heart.) It may not be your classic Cinderella or Aladdin, but all your stock characters are in there somewhere. There’s the magical helpmate (good witch Glinda, played by Jenna Sian O’Hara), the boo-able baddie (her evil, emerald-green counterpart, the Wicked Witch of the West [Abigail Middleton]) and the fourth-wall-breaking audience banter-meister (here, Scarecrow, the hilarious Reece Sibbald).

In fact, this is a production that goes to town (‘to Emerald City’?) on the audience participation element. There’s more (actively encouraged) cheering, booing and hissing than at the average PMQs, plus frequent recourse to the standard chorus of ‘He’s behind you’ or ‘We’ll have to do it again then, won’t we?’

The volume of the audience at press night was a testament to just how involved we were all made to feel. This applied to some more than others: one willing victim had their walking stick stolen at one point; another ill-fated front-rower endured the flirtatious attentions of Scarecrow. Perhaps he should have been concentrating more closely on his footing instead. Though the lemming-like glee with which he hurled himself forwards and off the stage (plus the strategically-placed crash mat!) suggested this was scripted. Unlike the ad-lib to veil a forgotten line, which raised just as much laughter. Further down the age scale, a handful of kids invited on-stage for the finale were evidently delighted. (One sparky individual proved himself a Munchkin in the making.)

Other highlights included banter at the expense of BoJo, Lion (Scott Gallagher) dancing a TikTok routine, and a rousing rendition of ‘Bat Out of Hell’ by the late great Meatloaf, performed with plenty of gusto – and green – by the Wicked Witch and her entourage. While modern pop references (e.g. to Anne-Marie’s ankle) and songs were knitted into the show, the classics remained as well. Mia Molloy’s Dorothy serenaded her dog with a performance or ‘Somewhere Over The Rainbow’ that was (To)totally flawless.

Less enjoyable was the random circus interlude (‘Meanwhile, back in the Emerald City, the circus had come to town…’). This featured, bizarrely, a duo of gyrating dinosaurs as well as a trio of neon Beatlesesque puppets. (It seemed Ringo had, um, Rin-gone.) Still, it all fitted the bill for colourfulness, at least. And no one can argue that Oz isn’t always upside-down!

Overall, then, turning the Christmas panto tradition on its head proved a roaring success – and not just thanks to cowardly Lion. If Dorothy was note-perfect, charismatic Scarecrow was joke-perfect (must remember the beans-in-eyes/Heinz sight gag for future reference!). Final question: if pantomimes don’t have to be constrained to Christmastime, does that mean pigs-in-blankets don’t either?