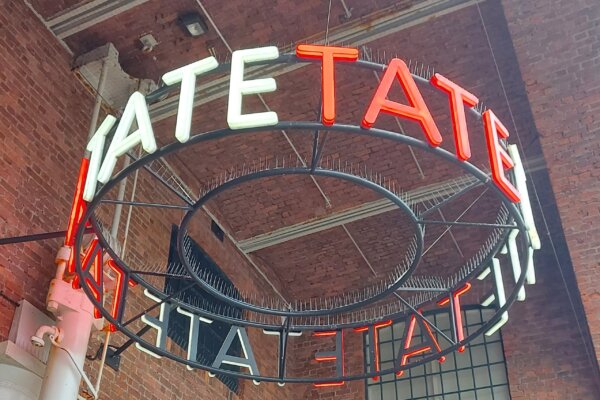 Port and Migrations and Global Encounters at Tate Liverpool

On the 15th of February, Tate Liverpool opened two new free exhibitions to the public; Port and Migrations and Global Encounters. The exhibitions are connected in a manner deeper than simply their location within the gallery and naturally flowed together. It uniquely captured how travel and voyage lead to the movement of culture and arts.

“By exploring works like these, and how they resonate with local and global history, we can consider the relationship between Liverpool and the world that it looks out on.”

This is especially prominent, considering the Tate Liverpool’s location, overlooking the Mersey on Royal Albert Dock. Much of Liverpool’s identity as a city hinges on the intersection of art and ports. This collection’s brief home at the gallery feels well-matched and adds another layer to the pieces themselves.

The headline piece of the collection, Hew Locke’s Armada (2019), was understandably the highlight in the Port and Migrations display, despite there being more than 80 works on show.

The colourful vessels were hung from the ceiling at shoulder height. This made the viewer part of the sea of space beneath them, into which dangled vines and nets. People circled the piece, going onto their tiptoes to get a view of each boat’s intricate details, that another had obscured. Armada didn’t feel like a military scene, despite its title and the boats united in facing the gallery door. Instead, perhaps, carrying life and culture in a manner indicative of Noah’s Arc.

The boats themselves ranged in historical era and size, with yachts sailing alongside rafts on the outskirts of the display, resembling those seen on news footage of refugees in the Mediterranean. From drawings on the sails, to Nazar amulets hung from the prow, there was a wide range of methods of embellishment. All of the boats seemed used and worn, suggesting human movement despite the absence of people upon the ships, except for in illustrations.

Arguably the most eye-catching exhibit, partially due to its scale, was Untitled (Ghardaïa) by Kader Attia. The impressive replica of the city was initially unrecognisable, as it’s made of food. The work slowly crumbles, making the city appear precarious, contrasting to the protection of Ghardaïa’s World Heritage accreditation.

Global Encounters uses Modernist art to explore its themes. Most recognisable, is Piet Mondrian’s Composition with Yellow, Blue and Red but a highlight was Chen Zhen’s Cocon du Vide (‘empty cocoon’). The sculpture, a chrysalis form on a chair, suggests both an entrapment and room for growth, encapsulating the confrontation of the international and colonial past that much of the collection grapples with.

To catch the Armada’s debut at the Tate, Port and Migrations, and Global Encounters, visit Tate Liverpool on the Royal Albert Dock and you can find more on arts and culture in Liverpool here.