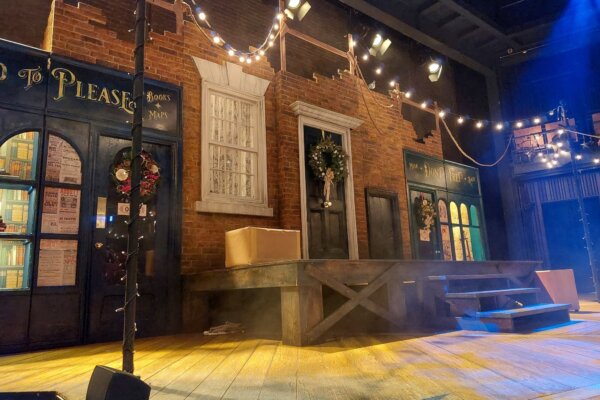 Not since some gastronomic loon invented the peanut butter and jam (jelly) sandwich has there been a combination quite so random as Chester Storyhouse’s latest offering. ‘Oliver Twist!’ is part play, part pantomime, part acrobatics performance, part punk-pop concert and part pooch parade. And, much like the PB&J, overall it proves sweet, a little bit sticky in places, and undeniably nutty…

Not on your jelly!: A toasted peanut butter and jelly sandwich

The original source for the performance is, of course, Charles Dickens’ classic (1837-9) serial, Oliver Twist. The story gained further notoriety after successful stage and screen adaptations in 1960 and 1968, respectively, spawning hits like ‘Consider Yourself’, ‘You’ve Got to Pick a Pocket or Two’, and ‘I’d Do Anything’. It tells the story of a young orphan, eponymous Oliver Twist, shunted from pillar (i.e. workhouse) to post (undertaker’s apprenticeship), before fleeing to London and being adopted by a posse of pickpockets. Whilst in the capital, in a fairytale-esque twist of fate, he happens across the wealthy Mr. Brownlow, who, it transpires, is one of his only surviving relatives. Indeed, with its rags-to-riches story structure, there’s definitely something Brothers Grimm about the narrative. Or, considering its setting is largely Victorian London’s seedy underbelly, perhaps more Brothers Grimy.

This soot-and-spittle existence was something the Storyhouse conveyed particularly well. There was no skimping on detail here. It was everywhere from the peeling flypapered posters of the set (designed by Elizabeth Wright) advertising illicit dog fights and back-alley circus attractions, right down to (quite literally!) the characters’ feet, shod in scuffed boots with mismatched laces. Furthermore, costumes worked cleverly to convey both character and class status. There was the aristocratic Rose Brownlow (Claire-Marie Seddon) in a fancy floral frock, the upstart Mrs. Sowerberry (Milton Lopes) in a girthy, garish green number, and poor ol’ Nancy (Jessica Jolleys) in her hand-me-downs.

Gruel Yule: The Christmas-inspired set design of the second half

Oliver is a story that thrives on its’ characters: the likes of the Artful Dodger, Fagin and Bill Sykes, along with Oliver himself, are firmly embedded in the public consciousness. It’s a risk, then, to mix things up – one this production had no problems with taking. For instance, there was some serious gender-bending. Both Fagin and Jack Dawkins (‘The Artful Dodger’) were played by women, whilst Mr. Sowerberry was actually a Ms., and Mrs. Sowerberry a Mr. (a mind-warp, I know!). This played into the pantomime tradition, with the comic Mrs. Sowerberry becoming a sort of honorary Widow Twanky. (Admittedly, few dames prove quite so flexible: Lopes doubled as an acrobat for a picturesque dance interlude.)

Other nods to the pantomime genre included some ‘Oh-no-it-isn’t/Oh-yes-it-is’ and ‘He’s behind you’ banter among the characters, which didn’t feel quite so awkward without the usual forced audience participation. Though there was some audience interaction, and the standard shoehorned political joke, both of which raised laughter but distracted slightly from immersion in a supposed Victorian underworld.

Interestingly, The Storyhouse’s production made the unorthodox decision to delay Oliver’s first line until more than half an hour into the show. This meant that little Twist (Luwe Hayes-Roberts) didn’t even have the chance to utter his immortal line, ‘Please, sir- can I have some more?’. Instead, workhouse boss, Mr. Bumble (Matthew Ganley) did this for him. (In excellently ‘willainous’ affected Cockney, might I add.) This conveyed the orphan’s puppet-like powerlessness, and also restricted audience members, giving less of a chance to empathise and engage with him.

The Pickpocket Papers: The frontispiece for the first edition of Dickens’s second novel, ‘Oliver Twist’

The more engaging characters instead proved to be the more talkative ones: Fagin, Dodger, the camp coquettish Mrs. Sowerberry. (That is, excepting the chocolate brown Labrador who took a bark-free star turn as Bullseye.) The character (played by Cynthia Emeagi) was transformed from a problematic anti-Semitic caricature to an African obeah witch. No ‘Money, money, money’-grubbing here. Instead, she spoke in a sorceress’s rhyming couplets whislt waving a super-sized house-key, or magic wand. This created a sinister dynamic, with Fagin as coven leader controlling her pickpocket protegees as if they were voodoo dolls.

Another unexpected element was the show’s choice of songs: think 70’s punk. Counterculture bands, like The Clash, The Jam, and The Smiths, with tracks like ‘Going Underground’ and ‘Ever Fallen in Love’, all worked particularly well during montage scenes; even if some of the modern lyrics did, ahem, Clash with the nineteenth-century setting. Meanwhile, the multi-talented cast supporting themselves on guitars and percussion added a unique, folksy vibe.

Overall, Storyhouse’s ‘Oliver Twist!’ was (Oliver) twisted! It had less tragedy than the novel, film, or stage-show originals, but far more farce; less focus on Oliver and more power for the females, less ‘Cor, blimey!’ and more musical counterculture. It even had a different (happier) ending, concluding with Oliver proclaiming one of his few lines, culled from another Dickens classic: ‘God bless us, every one!’

Oliver Twist! ran at Chester’s Storyhouse until 16 January. Visit the website, www.storyhouse.com, to view the venue’s upcoming schedule for 2022.