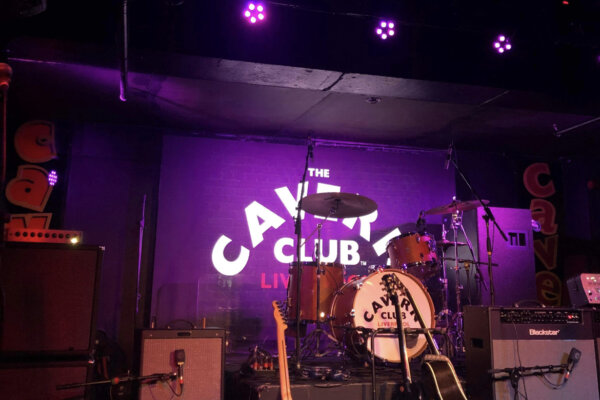 Dreampark proved themselves to be as dreamy as their name at BBC’s Introducing Showcase at the Cavern Club. In a place where legends and legacies are rife — every turn of the venue being marked with mementos from time past — there is no doubt an immense pressure to playing the Cavern Club, but Dreampark triumphed with their upbeat, infectious 30 minute set that preceded Tilly Louise and The Heavy North.

In conversation with the crowd, the duo talked about how they had recently returned from Israel, but it is clear they are already making waves in the Liverpool music scene, having played ‘Jimmy’s’ prior to this. Whilst there was an initial nervousness, the group promptly found themselves on the stage. Bathed in pink and blue lights, high notes were hit effortlessly and they marked themselves as potential rising stars.

With a distinctive look and clear musical direction that the duo describes as ‘nostalgia-pop,’ there was a certain self-assuredness to the band when they took to the stage. They made the vast venue feel incredibly intimate as they transported the crowd back to decades past, their music being reminiscent of eighties synthpop. Carmel Faraggi’s vocals were melodious and strong — a highlight being when she reimagined Fleetwood Mac’s ‘The Chain,’ putting an ethereal twist on the bluesy rock song. Additionally, Dreampark’s original songs show similar hit potential with their latest single ‘Cherry On Top’ having an impossibly catchy chorus and fun rhythm.

Although the set was relatively short — drawing from their singles and EP ‘Summer Storm’ — it was memorable and time seemed to slow for their retro aesthetic and psychedelic inspired tunes. Striking the perfect balance of young and old, they brightened up the darkened Cavern Club with their vibrant outfits, pop songs and the funky ‘DreamVision’ glasses that they handed out to attendees. This positive energy was then maintained by the next two acts. Tilly Louise and her fantastic hooks had the crowd hyped whilst The Heavy North promptly filled the Cavern Club with cutting lyrics and crashing drums.

In a time where music is all about pushing the limits and breaking boundaries, Dreampark are venturing away from the typical constraints of pop to establish a unique sound that is unlike anything that we have heard before.