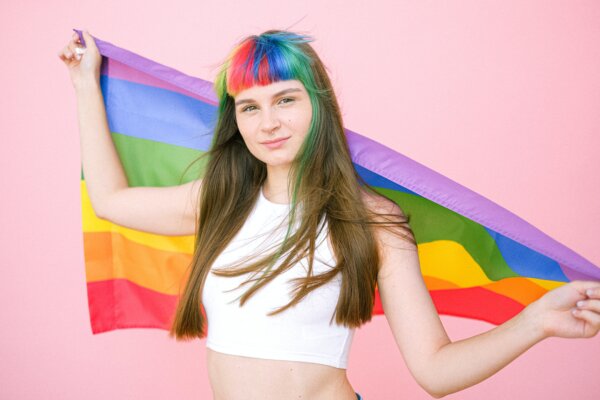 LGBT+ History Month: What is it and how are we Celebrating?

February marks LGBT+ History Month across the UK. 2022 marks the 50th anniversary of the very first Pride March in the UK in 1972. Developing from the early Gay Rights Movement to be inclusive of Lesbian, Gay, Bisexual, and Trans + a broad spectrum of queer identities, the month marks the struggle queer people have faced to be recognised both in wider society and within their own umbrella culture. I spoke to Loukas Walsh (they/them), a 4th-year Psychology student, about their role in our LGBT+ Society. Exploring how the month of reflection has an impact on them and their plans to celebrate.

Researching religion and mental health, Loukas is the Queer/Questioning representative and Co-President for Liverpool’s LGBT+ Society.

I originally wanted to be in the society to help students like me find a place to belong, not only within the university, but within Liverpool as a whole. I started in my 2nd year as the Q rep and social secretary. From my 3rd year onwards, I became Co-President with Tobias Hunter (they/he) and we worked together to keep the community and society connected online through quarantine.

What is the LGBT+ Society?

A rapidly growing and highly active society, the LGBT+ Soc is a safe harbour for those who are within the LGBT+ community or are questioning, interested, or an ally! Creating an environment where people can gather to have fun and campaign for change. They are one of the most well-known societies and have been awarded Guild Awards for Biggest Impact on the University Community (2018) and Society of the Year (2017). Their President also won the Activist of the Year Award (2020).

I would say our society is extremely active, running bar crawl socials every weekend, as well as identity talks in first semester by each of our identity representatives weekly. We hold games nights, both online and in person, as well as crafts events, coffee meets, and more! We currently have over 450 members and growing.

Currently, they are working on the name change policy to help transgender staff and students. Making changing their names within the university’s system easier and more accessible. Additionally, they are working closely with the School of Medicine; giving talks and events regarding treating LGBT+ patients and teaching about the issues specific to the community.

We are promoting safe practice on nights out by handing out anti-spiking materials, as well as ear plugs to help those who may have trouble in stimulating environments like clubs! So the more members we have who engage with us, the more we will be able to do for the rights of students, and not just LGBT+ ones.

What is LGBT+ History Month?

Two-thirds (64%) of respondents experienced anti-LGBT+ violence or abuse. An astonishing 9 in 10 had experienced verbal abuse (92%). 3 in 10 had been subject to physical violence (29%).

This shows just how important it is to acknowledge all those who have suffered just for being themselves. Celebrating the tireless work being done to promote equality and the successes borne of this.

We hold events over the course of February every year as part of celebrating LGBT+ history. We also do work in disabled history month, women’s history month, and black history month similarly – but February is the big one for LGBT+ History.

LGBT+ History Month in the Society

LGBT+ history is incredibly important to remember, not only so that we can learn about the discrimination of the past, but also so that we can celebrate the progress our community has made! During this month we invite guest speakers from within and outside the university to educate people on topics such as the AIDS crisis, LGBT+ figures in history and their importance, the change in cultural vision of our community and how it has affected things like pop culture, and current research into LGBT+ minorities and mental health. We also hope to run LGBT+ inclusive events in areas such as sports, so our members, especially transgender students, can feel comfortable changing in the room most suited for them. The society also raises money for charities such as the Terrence Higgins Trust through our events and selling LGBT+ merchandise.

It’s not just about education, it’s also about celebration! Nothing screams a celebration of all things LGBT+ than the culmination of the month – the Coming Out Ball!

The Coming Out Ball is an event themed around the idea of coming out as it was historically; instead of announcing to those close to you your identity, you dress up in your finest ball wear and make a scene in front of your close friends. It’s the highlight of my year at university that’s for sure!

We encourage everyone to check out their Facebook and Instagram to get involved! Also, LGBT+ History Month is being acknowledged across several societies. Make sure you keep your eye on the Guild’s events calendar if you don’t want to miss out.