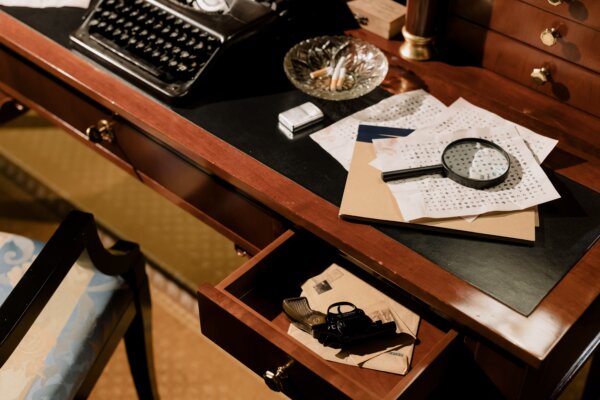 Not a Cluedo: ‘Dial M For Murder’ | REVIEW

You’d be forgiven for concluding this is a description of Cluedo, the classic 1949 board game and sometimes generator of Christmas arguments. In fact, it also pretty aptly summarises Frederick Knott’s 1952 play, a production recently revamped for 2021 and now touring on a major nationwide circuit that began in Liverpool. Ladies and gentlemen, please put your hands together for the return of the ‘genre-defining thriller’, Dial M for Murder.

The stage version is probably less notorious than its 1954 filmic counterpart. Directed by Alfred Hitchcock, starring Grace Kelly as ditsy double-dater Margot, it earned an impressive $2.7 million at the box office over the first year of its release. The plot follows a similar trajectory. After learning of the two-timing antics of his young wife, Margot, jaded ex-tennis professional Tony Wendice becomes a little too jealous, devising an elaborate plot to murder her. Unfortunately, he ropes in incompetent old school chum Captain Lesgard, who promptly cocks up his mission. Lies and counter-lies ensue, as, under the not-so-beady eye of Inspector Hubbard, Tony tries to get away with ‘the perfect crime’.

It all starts promisingly enough, the curtain rising on a dimly-lit, cosy domestic scene. Margot and beau Max engage in a wistful post-coital discussion of – what else? – murder. You just know that if a character baits the audience with the ‘m’-word within the first two minutes, by the play’s end, heads will roll. Guess the title proves something of a clue, too. Yet the question remains; whose?

Inspector Hubbard (Corrie regular Christopher Harper) at least had lines which raised a few laughs, though this could just as easily have been due to their audibility as to their content. The waffled whisperings of other cast members proved less so. This didn’t help matters when the curtain rose on a convoluted second half involving much confusion about a doormat (not Margot) and a set of house-keys.

Perhaps the production team needed to Dial M for Microphones.

At least the play pleased the eyes, if not the ears. The set was the elaborate sort you find difficult to believe the crew dismantle between tour dates. A gramophone, stacks of singles, a monstera plant, the ubiquitous Dali-style telephone… as a living room, it did look plausibly liveable. A colour scheme of beige complemented by ample splashes of mustard completed the post-war aesthetic in the supposed Maida Vale flat. Set designer David Woodhead had outdone himself. We even had an attached kitchenette and a door – with hinges!

Given the detail lavished upon this set, it’s perhaps understandable that it stayed the same throughout.

Dial M for Murder did have some ticks on its scoresheet. The play cleverly incorporated choreography to cater for twinkle toes Tom Chambers, former Strictly champ back in 2007. Meanwhile, Michael Salami’s (Hollyoaks) character Max made subtle nods to race relations. The incidental music was great, too, including a track from The Beatles Revolver album.

Overall, though, in the contest pitting play Dial M for Murder against the board game originally to be marketed as ‘Murder’? For me, Cluedo takes the crown. The rainy day stalwart offers a plotline simpler to follow and characters that you actually root for. Even if this partiality is limited to your own plastic counter!