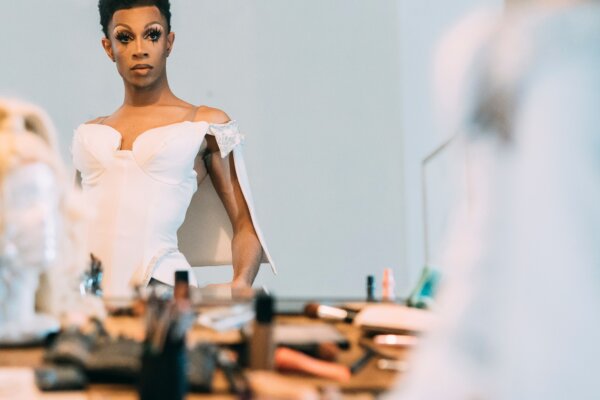 Well, everybody’s talking about Jamie, but this musical boasts a cast of twenty-two. One of the show’s signal successes is its incorporation of multiple stories. There are the estranged childhood sweethearts; the man-hungry local motor-mouth; the insecure school bully; the grade-focused savvy hijabi. These figures are fully fleshed out; the latter gets her own solo number (‘It Means Beautiful’), with another’s story told through an interpretative dance montage catering to the talents of BGT winner turned cast member, George Sampson. Then, of course, there’s Jamie New, aka Mimi Me, aka The Boy In The Dress.

Jamie is the show’s titular character (no spoilers there!), who, as the curtain rises, is busy celebrating his sixteenth birthday as best he can, in a compulsory careers lesson at the nearby Sheffield comp. (In the production’s current run, he’s being played with sass by Layton Williams, an actor whose mixed-race ethnicity adds an extra dimension to the role.) His (undeclared) dream job? A world-renowned drag queen.

Undeclared, that is, to all but his hugely supportive mum, Margaret, and her sassy, expletive-spouting sidekick, Ray. When his mother cobbles together enough to gift her son a pair of the glitziest sky-high heels imaginable, Jamie takes one big (albeit tottery) step forwards towards his dream. The path leads first to his neighbourhood drag couturier ‘Victor’s Secret’ (hmmm… sounds familiar), on to a slot at the local ‘Legs Eleven’ cabaret night… and hopefully ends up with him all frocked up at the school’s prom night. There are just a few obstacles along the way, not least of which is the mentality that ‘a boy in a dress is something to be laughed at’.

With character Jamie New’s stage debut coinciding with the end of the show’s first half, an interesting decision was taken not to show the schoolboy in drag. Far from proving underwhelming, however, it felt appropriate: tactful, not tasteless. It stopped the musical from turning into something it wasn’t: a second-rate burlesque show. The omission also fanned the flames of the resurgent, Chinese whispers-style track which began the second half. ‘Everybody’s Talking About Jamie’, a perfectly-pitched dance number and firm audience fave, reflected the fact that few actually knew what was going on but that this wouldn’t stop them gossiping about it!

Keeping up With the Times

Somewhat unusually for a stageshow, the storyline’s based upon a BBC Three documentary, Jamie: Drag Queen at 16, directed by Jenny Popplewell. It charted 15-year-old schoolboy Jamie Campbell’s struggles to convince both his school and wider community to accept his queer identity, and first aired back in 2011. In the following 10 years, much has clearly changed: PMs and Presidents have come and gone; Little Mix have formed and (partially) un-formed; the world has, ahem, woken up to woke culture.

While all this progress is laudable, it also means that some aspects of Jamie feel a little outdated. It’s been a decade and we’ve (hopefully!) moved past the use of ‘gay’ as an insulting epithet (cf. bully Dean’s ‘You’re a gay, gay, gay, gay, gay, gay… gayboy.’). Nowadays, teachers are trained to celebrate diversity, not to stigmatise it (take note, Miss Hedge).

All in all, Jamie’s school scenes may fast be becoming a matter of historical record. This is not to say that these scenes weren’t engaging; they completely captured the cattiness of classroom/cafeteria banter, making me slightly nostalgic for my own schooldays with witty one-liners. (A ‘vagatarian’, anyone? Nope, you don’t really want to know…). Plus, scriptwriter Tom MacRae had cleverly inserted some subtle nods to our current pandemic-centred reality. Cue a deft gag about social distancing and much flicking of face masks by the rowdy teenagers. Becca (Talia Palmanathan) and Bex (Jessica Meegan), in particular, were convincingly obnoxious.

Another star of the show was the set. Though it was less star-shaped, more Rubik’s cube-inspired (challenge accepted for the production’s resident maths nerd, Pritti Pasha). With a little elbow grease from the ensemble, cramped townhouse kitchen rolled into local drag shop, which rolled into a school toilet cubicle. Each individual backdrop was fully stocked with the necessary props: think kettle, cash machine, or carbolic soap, as required.

The overall verdict? Much more ‘You slay!’ than ‘Sashay away’. Everybody’s Talking About Jamie proved a sequin-filled, near-three hour spectacular, succeeding in telling multiple stories. Towards the end of the show, Pritti Pasha (Sharan Phull), Jamie’s best friend and foil, points out to him: ‘Other people, we’re not just your backing singers’. The show proves so, both figuratively and literally. Everybody may be talking about Jamie, but the show stops us from forgetting that everybody has a story.

Photo by Greta Hoffman from Pexels