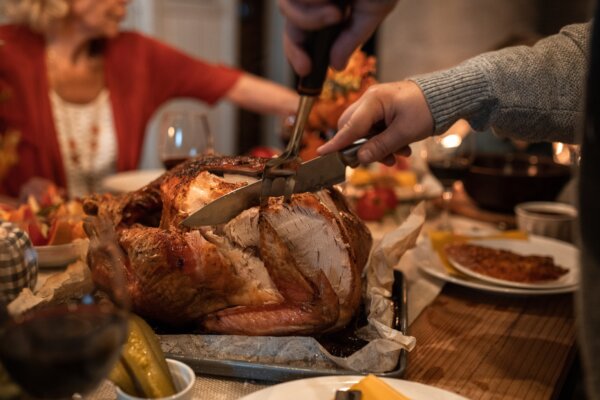 Today people are celebrating Thanksgiving in America! Celebrated on the fourth Thursday of November in the United States, the date changes each year. While we don’t celebrate it in the United Kingdom, there are many international students who do. I caught up with Dr Diana Powell from Wirral Unplugged, who is currently working with BA Marketing students, to ask about how she’s still embracing Thanksgiving and her American roots despite now living here in England.

Thanksgiving is normally accredited to the ‘Pilgrims’ who left Plymouth, England and arrived in what is now called Plymouth, Massachusetts. Pilgrims had no idea how to successfully grow crops in the ‘new land’ and the Native Americans taught them how. In thanks for this knowledge, Pilgrims invited Native Americans to feast to give thanks for their help and the bountiful crops they’d grown.

Nowadays, Americans gather to celebrate with lots of food. They give thanks for things that have gone well for them in the year. This is a time to reflect on what they are grateful for and want in the coming year.

It’s Thanksgiving and for me at least, a time to express what I’m grateful for. Wherever in the world I’ve been since 1996 (from other states to other countries). I’ve celebrated Thanksgiving with those around me.

How is it Celebrated?

In the beginning most Pilgrims were religious and there are some who credit Thanksgiving as a Puritan celebration. However, over the years, Thanksgiving has come to be celebrated all over America by those of differing cultures and religions. People come together and try to return home to their families to celebrate.

There’s no dress codes, no schedules and no presents; so the only pressure is to make edible food – preferably, mashed potatoes and gravy, stuffing, turkey, cranberry sauce and pumpkin pie.

Growing up we’d go to Thanksgiving parades or watch them on TV and there was a lot of American football, but the rest of the time was spent playing family games, eating, talking and just relaxing together.

What Does it Mean to Diana?

We all choose to celebrate differently. A holiday can be a time to embrace traditions, even if they aren’t originally yours! There is a lot of emphasis nowadays on wellbeing and gratitude – maybe Thanksgiving could be an opportunity for you to look at what has gone well for you this year.

It’s a time to stop and reflect on the good things in my life (and say them out loud). However cheesy that sounds, it’s nice.

It’s a time for me to connect with my mom (by phone / Zoom) as she cooks, literally. So she can answer those little questions you ask if your mum is standing near you in the kitchen.

It’s a time to share a meal with friends. I’ve had guests from all over the world come to our house each year to eat with us. I have 3 more willing to come tonight!

Why is it Controversial to Some?

There are some who are moving away from celebrating Thanksgiving now and instead looking at it as a time to reflect on how their ancestors behaved or were treated. While the coming together of Pilgrims and Native Americans in celebration is a nice image, the reality is that when Europeans first made the move to America, it was in order to conquer it. When they arrived, they set about mass genocides in attempt to eradicate the Native people and claim the land for their own. Notably, the Wampanoag tribe who were invited to ‘the first thanksgiving’ were nearly wiped out by a sickness brought by the new settlers and following the feast, they were further killed and enslaved for years after. They now look to this day as a national day of mourning.

We, the Wampanoag, welcomed you, the white man, with open arms, little knowing that it was the beginning of the end; that before 50 years were to pass, the Wampanoag would no longer be a free people.

Have you been celebrating? What are you thankful for this year? Let us know and send us your pics!