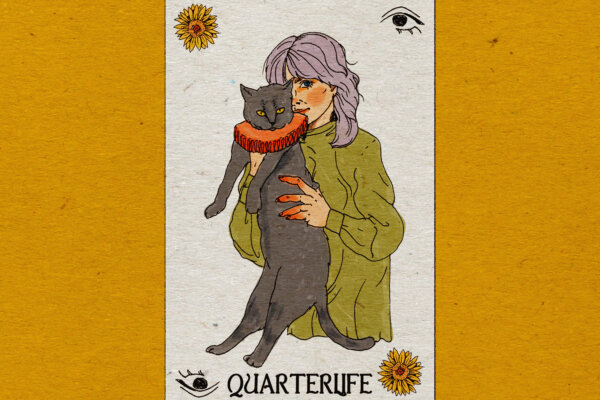 ‘Quarterlife Crisis’: An Interview with… The Famous Daxx

A digital interloper pops into the virtual waiting room just as my Zoom interview with The Famous Daxx is about to start. I’m supposed to be chatting with the London-based musician about her upcoming third single, ‘Quarterlife’, due to be released November 25. Instead: one ‘Marina Sprenger’. Who was she? Overprotective manager? Zealous fangirl? Crazed computer-hacking supervillain? Just what had she done with Daxx?

As it transpired, Marina was Daxx, the latter being simply a stage-name. (The ladies share a spiky silver-grey barnet, a sunny disposition, and a back-of-my-hand knowledge of the music business.) Sighs of relief all round!

Musical pseudonyms established, Marina alias Daxx and I then settled back (behind our respective screens) to discuss, among other things, feminism, felines, and ’Seventies fashion…

NAOMI ADAM: Afternoon, Daxx! Where are you Zoom-ing in from today? What is the view beyond your screen?

THE FAMOUS DAXX: I’m at home. I’m in my flat in London, and the view behind my screen is of some [ornamental] cats and dinosaurs… and my [real-life] sleeping cat! Plus my guitar at the back, because I’ve just been practising.

NA: Your latest single, ‘Quarterlife’, is due to be released very soon; next week, in fact, on the 25th of November. Can you talk us through the background to and rationale behind the song?

TFD: Yeah- I wrote the song almost two years ago, when I was 24, in the year when I was going to turn 25. I wrote it quite early in the year, maybe a month before the whole Covid thing started. I was very scared to turn 25, just really stressed about it. As I mentioned before, I ended up buying a cat after a few months! I actually considered calling her ‘Quarterlife Crisis’. I didn’t! It was just a weird time, I guess. Reaching 25, and seeing where I am in life. There were a few songs that I worked on during lockdown. There were a few songs that I worked on and recorded during lockdown. Over the last year, I basically finished three songs: the first one was released in April, and this is the third one now.

NA: So what is your cat called, if not ‘Quarterlife Crisis’?

TFD: She’s called Babayaga, which is a Russian witch [from a traditional folk-tale]. Yeah, there’s a whole feminist statement behind the name that I made up in my mind!

NA: Speaking of feminism, I’ve read that you chose to record ‘Quarterlife’ with an all-female session band. Could you talk a little about the reasoning behind this decision?

TFD: Yeah, so especially for recording, I’ve had it before where everyone is male, and everyone [supposedly] knows better – I guess any woman in a male-dominated industry can relate to that. I didn’t have much studio experience when I started recording, and I just wanted to make sure there wasn’t a bunch of guys being dismissive towards me and not respecting me enough.It’s my project. I want people to do want I want within not feel uncomfortable or like I’m not taken seriously because I’m a woman. Also, still there’s not that much representation for women in music, especially with instruments like guitar or drums.

NA: Of course, you yourself are an instrumentalist, as well as a singer-songwriter.

TFD: I always go above and beyond to emphasise that I’m a guitarist and not just a singer. That’s always what people assume and it really annoys me!

Guitar Hero: A press shot of the musical multi-hyphenate

NA: Do you always work with the same band?

TFD: No. So, for this song, it was Gabi King on drums, who plays for Declan McKenna. Then- I don’t know if you know Los Bitchos? They’re a pretty cool band, all-female, instrumental music?- their bassist, Josie [Josefine van Jonson], played bass for me. Then I had a friend of mine, a neighbour from where I used to live before, Sara- she played keys for me. Next time I record, though, there will probably be different people. Just because logistically it might be easier!

NA: Circling back to your upcoming release, I’m interested in the word ‘Quarterlife’. Is it a term of your own invention? Or did you encounter the concept elsewhere?

TFD: No, I think I made it up myself. I go very instinctively when I think about writing songs, I remember I made the demo for that song [‘Quarterlife’] in just one day! I sat down and it was one of those songs where it just comes out. The words just made sense. It was a very organic way of letting this [feeling] out. I wasn’t even as stressed and then I wrote this song and I was like ‘Oh cool, this is really in my head’.

NA: So you channelled your anxieties through writing about them?

TFD: Yeah! I do a lot of writing that just sorts my head out a bit.

TFD: Yeah, definitely. I think it’s like that for a lot of musicians: [writing] helps you to make sense of things. For me it’s always like something is brooding, and as soon as I write the song it’s a bit like a release.

NA: Having been born and raised in Germany, have you ever written or considered writing your lyrics in German?

TFD: I have, but I don’t think it’s really for me. I always wanted to be a bit more internationally perceived and I think that’s easier in English. Also, I think German is quite a harsh language at times. I like to be very floaty… breathy… I think it works better for me in English. [Though] there are some great artists who sing in German, and have found a very unique way to use that.

NA: Aha! A stepping-stone to the ever-present ‘Influences’ question. Who inspires you?

TFD: There’s definitely a lot of musicians that inspire me. Recently, I’ve really loved the new St. Vincent album [Daddy’s Home]. In general, I grew up with The Beatles. I used to like my Dad’s stuff like Pink Floyd and Led Zeppelin. Also, I’m obsessed by The Bee Gees and I listen to them a lot. There’s so much nice stuff going on [like] the full ‘wall of sound’ thing that they have for their production. That’s something that I like for my music as well. I take stuff from all kinds of places. For ‘Quarterlife’, the beginning chord progression was adapted from a YouTube account that reviewed guitar pedals.

You Feline This?: The custom-designed artwork for Daxx’s latest single, ‘Quarterlife’, by Brighton-based artist Emma Rodriguez

NA: Aah, the inside track- quite literally! Now, what about the striking visuals accompanying your new music: specifically, what is the story behind those sunflowers?!

TFD: The sunflowers – it’s not that deep! I love yellow as a colour. In the press shots, the background is my yellow bedsheet; it’s just a really happy colour. It’s been for me over the last two, three years a sign of self-expression. Before that, I was trying to wear all black and be very cool and mysterious. It’s all about being a bit more me, a bit more authentic, and not trying to be somebody or something else. I have my cat [in the artwork] because when we did the press shoot, the photographer thought it would be funny. We actually ended up doing this whole maternity shoot with her!

NA: There’s a really resonant line in ‘Quarterlife’: ‘I didn’t read the book on how to grow up’. What would you want to find in a book like this, if it existed?

TFD: Like everything! [Laughs.] The standard things, like how to do taxes, how to eat regularly, how to plan meals. I’m really bad at that! I feel that, as a grown-up, I should know these things… but I don’t!

NA: As your latest single focuses on the themes of time and ageing, I thought I’d go off-piste with this final question: If you could time-travel to any era, past or future, where would you be landing your Tardis- and why?

TFD: To be fair, probably the ’Seventies! Maybe like late ’Sixties, early ’Seventies. Woodstock… hippies… a lot of music that I really like is around that time: my jam! It’s the stuff I really focus on. Maybe I could hang out with Bowie, or something like that.

NA: Well, I’d be more than happy to pitch up for dinner, too. Provided you’ve managed to source that book on how to plan meals, that is!

The Famous Daxx’s third single, ‘Quarterlife’, is released on 25 November. You can listen to her two previous singles, ‘Weatherman’ and ‘Gamble’, on Spotify and/or Soundcloud now.