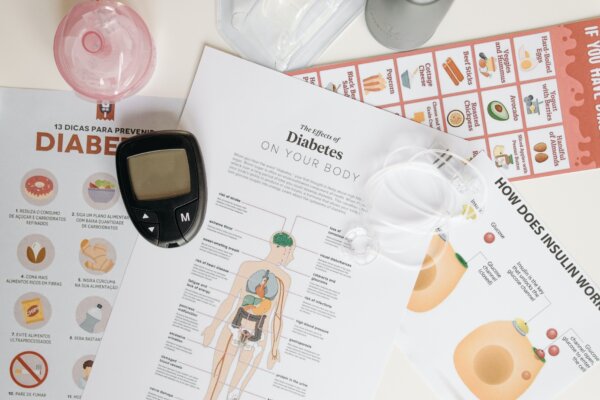 The 14th of November marks World Diabetes Day and this year is especially important. 2021 means 100 years since the discovery of insulin, a treatment that has since saved millions of lives – including my sister.

Though often an invisible condition, diabetes is life-changing and life-long. Around 1 in 15 people in the UK have diabetes with someone newly diagnosed with diabetes every two minutes.

To kick off my thinking about World Diabetes Day, I decided to ask my sister, who has type 1, what she wishes more people knew about diabetes:

“People don’t realise it’s every time you eat. There’s the paradox of getting more understanding when it’s visible but also wanting it to be invisible again when you’re injecting in public, or something beeps in a lesson.”

People are often confused about the difference between Type 1, Type 2, and gestational diabetes (which can develop during pregnancy).

Type 1 is when the pancreas can’t make the hormone insulin. This is because the body attacks the cells in the pancreas that makes the insulin, meaning type 1 is an autoimmune condition. It was previously sometimes referred to as Juvenile diabetes as most people develop the condition in their teenage years, but people can develop it later in life too, hence why it’s important to keep reminded of the symptoms. Type 1 diabetes is managed by taking insulin to help control the body’s blood glucose (sugar) levels. This is usually done via injection or a pump.

Type 2 diabetes is where the insulin your pancreas makes can’t work properly, or your pancreas can’t make enough insulin. There is also no cure for type 2, but some people are able to put their diabetes into remission. Type 2 diabetes sometimes also requires insulin but can also be treated by tablets and lifestyle changes.

Many organisations are working hard this World Diabetes Day to bust some myths about the condition:

When considering the signs of diabetes it’s useful to remember the 4 ts that come from being hyperglycaemic:

If you have any symptoms, Diabetes UK encourages contacting your GP and asking for a blood test for diabetes.

Living away from home and going to university can be especially difficult when living with diabetes. The JDRF website features a large toolkit on this as well as advice from personal experience.

With the recent news about spiking through needles, there has been concern over whether bouncers will allow diabetics with needles for injecting insulin into clubs.

For World Diabetes Day, there are lots of different challenges you can get involved with!

Diabetes UK’s campaign is the #NailingDiabetes challenge in which you paint your nails blue to help raise awareness of diabetes.

If you fancy getting out and about as part of your support, the JDRF 100 Challenge might be for you. As it’s 100 years since the discovery of insulin, JDRF is encouraging people to set themselves any 100-themed challenge.

When asked if she felt people could help the diabetic community, my sister said “I think my advice would be to try your best to understand. It doesn’t matter if you don’t, but the effort is good. Respect our boundaries and the irregularities of when we feel ill. It is very hard to control diabetes, so it is not our fault if we are ill.”

And finally, “don’t give unsolicited advice. I know my own condition and I know how it affects me better than everyone else”.