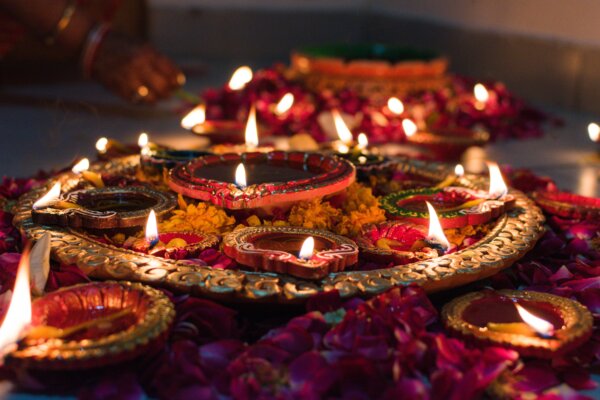 The light festival of Diwali lasts for five days. Falling between October and November in the Gregorian calendar, with the date changing each year. This year, it will last from the 2nd November to 6th November.

Srushti Gajanan Hode, from Maharashtra, India, is pursuing her MSc in International Business. She gave us some clarity about what happens during the festival.

As Hindus, Jains, Sikhs and Buddhists light the diya, pray, adorn their houses and open their doors to host and feast with family and friends, we acknowledge that this occasion celebrates the triumph of good over evil.

Isha Chaturvedi is also studying for an MSc in International Business, with the previous cohort. She is from Kanpur, India and while not religious herself, the festival reminds her of home, her heritage and her family.

Diwali is one of the main festivals for the followers of Hinduism, Buddhism, Sikhism and Jainism living in India, as it conveys a very significant message for the individuals & society. Diwali is also celebrated significantly in parts of Nepal, Sri Lanka, Bali & Bhutan and across the world.

Second year Law student, Pritpal Bhambra is from Wolverhampton and her family originate from Punjab, India. As a practicing Sikh, she celebrates Diwali but also Bandi Chhor Divas, a Sikh celebration.

Sikhs celebrate Bandi Chhor Divas as it symbolises the harsh political injustices our Guru and 52 princes faced to fight for the equality of human rights and freedom.

The Story Behind Diwali in Hinduism

Thousands of years ago, in the city of Ayodhya, lived King Dashrath. His eldest son Ram was from the first of his three wives. Prince Ram was a great fighter and protector of people. He was generous, calm and kind, so many wanted him crowned as king and to govern the city.

After completing his studies, Ram married a princess named Sita. Soon after this, his father decided to make him the king and started planning for his coronation. This angered his step-mother Kaikeyi (Dashrath’s second wife), as she wanted her own son, Bharat, to be king.

Years before, Kaikeyi had saved King Dashrath’s life in a war. He promised she could demand two wishes from him, no matter what they were or when they were demanded. She decided to use them: firstly, that Bharat be king and secondly, Ram be exiled for 14 years. Though it angered him, he was obliged to fulfil her wishes and accepted.

Ram went into exile with his wife Sita and half-brother Lakshman, who revered him. As Ram was his favourite son, the king died of heartbreak. In exile, Sita was kidnapped by the king of Sri Lanka, Ravan.

Ram gathered an army and travelled thousands of miles from India to Sri Lanka to save his wife. Ravan had also prepared a huge army but Ram and his army fought through them. Ram killed Ravan, won the war and reunited with his wife. After this, they returned home to India.

Bharat knew Ram was the most deserving of all Dashrath’s sons and would be a just ruler. So after the war, he met him and asked him to return to Ayodhya and claim the throne. Ram protected and governed his people so well that he became the greatest king in Indian history.

Why is the Story Celebrated?

The people of Ayodhya lit lamps, set off fireworks and decorated their houses. They distributed sweets and joined together in celebration of Ram taking back his rightful place as king. Hence, Diwali is known as the festival of lights!

People celebrated the victory of good over evil, kindness over cunningness and bravery and patience over cowardice. The festival conveys a significant message to society that no matter what and how difficult the situation is, if you have courage, patience, good intentions and calmness you can win everything in your life and defeat all the difficulties in your life with flying colours. It sends the message to indivduals that if you are a good person by heart and you are brave, you can accomplish anything in your life and fight back all the difficulties.

Srushti elaborated as with the depiction of Ram’s return, those celebrating the festival emulate the arrival of a god to their homes.

When Shree Ram arrived in town, everyone wanted to be the first to meet Him. He expanded Himself into as many forms as there were individuals and met them all at the same time, seeing their desire. Each individual had the impression that God had appeared to them initially.

Diwali has a rich philosophical meaning in addition to its cultural importance and celebrations. Light (prakash) represents God, kindness, and wisdom, whereas darkness (tam) represents evil, ignorance, and maya. The more we accept God into our hearts, the brighter His Divine Light shines inside us, releasing us from the consequences of ignorance’s darkness, revealing spiritual wisdom, and filling our lives with real pleasure.

The celebration of Liberation Day falls within the festive period, on the same day as Diwali. The story behind this is similarly of a just and noble leader.

This tactic was proposed by Emperor Jahangir as it would limit the number of prisoners who could leave. However, as Guru Hargobind Singh Ji believed in equality for all, he constructed his cloak to be made up of 52 pieces of string so that each prisoner could escape by holding onto one piece each.

Thus, Sikhs celebrate Bandi Chhor Divas by lighting up the Harmandir Sahib as it symbolises the return of Guru Hargobind Singh Ji on Liberation Day.

Isha and Srushti celebrate Diwali following Indian Hindu traditions. They have with similar experiences of celebrating with family and their community.

The Diwali Festival traditionally starts with Vasu-baras, which honours the female cow, which represents motherhood. This day’s customs include married women doing pooja to nursing cows with calves, thanking them for supplying milk and so contributing to the general well-being of their children. Buying gold and silver jewellery is an important ritual on this day, thought to bring money and good fortune for the rest of the year.

In India, people pray to God, light up lamps & candles, meet each other, go to get-togethers and distribute sweets. Just before Diwali, on the occasion of Dhanteras, many people buy silver & gold jewelleries and light up their houses with lights.

Sikhs celebrate Diwali similarly to Hindus, however the significance of the celebration is different.

Sikhs celebrate Diwali by placing oil lamps called diyas all around their house. Lakshmi, who is the goddess of wealth, fortune and luxury, is believed to visit each house and bless her devotees with this fortune, which is why our lights are kept on.

How Will Students Celebrate?

Although far from home in India, Srushti and Isha will be celebrating Diwali in Liverpool.

I shall begin my Diwali celebrations by worshipping God, performing pujas and praying for the health and happiness of my family and friends. I’ll prepare a traditional dinner and invite friends to a feast. I’ll light an oil lamp to mark the day with happiness and plenty. May the Diwali celebration also serve as a reminder to enlighten our intellects with the light of God’s wisdom and banish the darkness of material conditioning. Happy Diwali!

For this year’s Diwali, I will go to the Albert dock in Liverpool as they have decorated the place with lots of lights until 7th November. I will eat some sweets and meet my friends.

Pritpal is celebrating in Liverpool, with friends from university, before heading home the next day to celebrate with her family.

In Liverpool, I’m going to the Gurdwara with the Sikh Society and lighting a candle in my room. After my seminar the next day, I’m going back home to celebrate with my family by eating sweets, going to our local Gurdwara and watching a firework display!