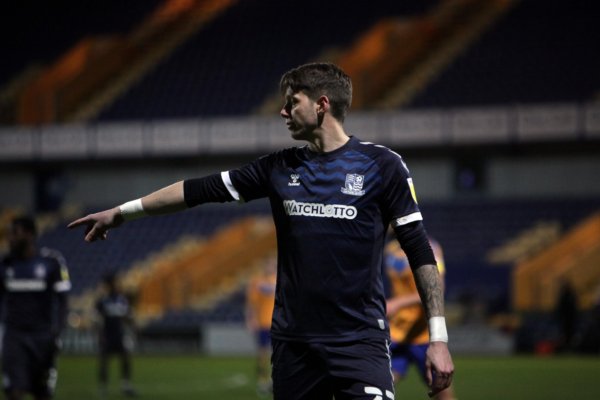 The Man Playing Every Position – A Piece on the Unique Career of Greg Halford.

In December 2020, Southend United signed Greg Halford on a short-term deal. Despite being something of a homecoming for the Chelmsford man, his introduction failed to have the desired impact. Though his ungainly presence leading the line prompted some personal research into a career that deserves appreciation and which can define the economic troubles of the English Football League.

Following Southend United’s desperate (and ultimately unsuccessful) battle for survival from League 2 relegation this past season was often a bleak and painstaking endeavour. Weekend after weekend fans diligently paid up £10 to support the Shrimpers on an iFollow stream and were reliably let down by a fraught and inexperienced side seemingly cursed with a wretched inability to score goals. The club is ludicrously run by careless chairman Ron Martin (see the ridiculous plans for a new stadium at Fossett’s Farm, ill-advised manager appointments and the enforced transfer ban) but that is an article for another time. This piece focuses on the career of the man Southend turned to in their time of great goalscoring need – Greg Halford.

In an interview with ‘Talking Wolves’, a podcast which interviews former Wolverhampton Wanderers footballers, the host Dave Azzopardi introduces Halford – the guest of honour – as a player who has “been around a bit to be fair”. This elicits a wry smile from the Southend man as he dryly returns “that is a fact”. Halford has played for sixteen clubs in his professional career. A Chelmsford man himself, his varied career ironically began at Southend’s Essex rivals Colchester United. Following teenage loans to Aylesbury United and Braintree Town, Halford established himself in the Colchester first team as a promising young player in the 2004/05 season. This earned him a call up to the England u20’s international squad, where after his debut against Portugal in the June 2005 Toulon Tournament, he scored in a 3-0 trouncing of South Korea.

But it was the 2005/06 season, in which Colchester United finished runners up (to Southend United no less) in League One which saw the remarkable progression of Greg Halford. Whilst he was predominantly played as a right back by manager Geraint Williams, the Chelmsford boy’s remarkable versatility was duly uncovered. Despite possessing a long throw akin to a cannon firing a cannonball (“I measured it once, it was half the pitch – 50 yards”) causing teams all manner of defensive strife, you would be gravely mistaken for thinking Halford a simple player. Scoring 8 goals in 55 appearances and defending in a more than competent manner earnt him a place in the League 1 PFA team of the year and caught the attention of teams in the higher leagues. The ambitious Halford was alive to this mounting interest and subsequently decided to hand in a transfer request in the summer of 2006.

Halford traded the blue and white stripes of Colchester for the blue and white stripes of Premier League’s own Reading for an undisclosed fee believed to be a record signing for The Royals. Regrettably, Halford struggled to establish himself. His defining moment for the team from Berkshire was in a clash against Tottenham Hotspur where a contentious handball decision went against the big man, and he was punished from the spot by the prolific Irishman Robbie Keane. Halford only played three times in his single season at the club. However, new dawns beckoned in the North East, as he was transferred to Sunderland for £3.5 million including add ons.

Despite the temperamental black cats manager Roy Keane singing Halford’s praises when he signed, the two endured a troubled relationship. Ill discipline plagued Halford’s spell at Sunderland, as he was unfortunately sent off in two of his eight appearances for the club. Despite this, he enjoyed successful loan spells to both Charlton Athletic and Sheffield United. In the latter spell he appeared 41 times for the Championship club in the 2008-09 season. Greg Halford was proving to be a complicated character, but obviously one that still had promise, as he was transferred to newly promoted Wolverhampton Wanderers in 2009.

Utilised as a right winger or full back, Halford again struggled to make an impact in the top flight. Although, he did make seventeen appearances for the Wanderers, and is fondly remembered by the fans. Halford then spent the 2010/11 season in the Championship on loan to Portsmouth and was signed permanently in July 2011. In a personal sense, he was very successful in the 2011/12 season on the south coast and netted on seven occasions despite being mainly used as a centre-back. The fortunes of Portsmouth were not so bright however, as amid terrible financial turmoil they were unable to avoid the drop to League One in 2012. Portsmouth desperately needed to offload senior players or they faced extinction, and Halford was a casualty of this. He was transferred to Nottingham Forest and was carving out a niche as a utility player who was also something of a journeyman.

At Forest, Halford was deployed as a front man – ensuring he could now accurately make the claim that he had been played in every area of the pitch besides in goal. He scored seven times in a busy first season but struggled to get in the team in his second season and was sent out on loan to Brighton and Hove Albion where he played a total of nineteen games. Forest released him when his contract expired in June 2015. Halford went on to play for Rotherham United (he was loaned to Birmingham City during his time there), Cardiff City and Aberdeen with varying degrees of success. Highlights included being made Rotherham captain for five games before being hastily stripped of this title after a draw and four losses, and playing a defensive midfielder role in Cardiff’s promotion season in 2017/18. His experiment in the Scottish league with Aberdeen was, simply put, uneventful.

And so we finally arrive back in Essex, at the struggling Southend United. As previously alluded to, the Shrimpers were in desperate need of a goal scorer. Greg Halford was signed on the shortest of short-term loan deals in December 2020 (Southend were under a transfer ban the previous summer) and redefined the notion of an instant impact. Miraculously, Southend were already 2-1 up against the similarly goal-shy Grimsby Town before the substitute debutant Greg Halford (hours after signing) rose to meet a looping cross from right-back Sam Hart. He made contact with a sort of bizarre backwards header motion, and the Grimsby goalkeeper would be forgiven for not wanting to see that one again as it trickled embarrassingly between his legs. One man’s embarrassment is another man’s jubilation however, as Halford wheeled away, exorcising some demons born out of his unremarkable Scottish spell.

Had Southend had found the solution to their terrible goalscoring problems?  They had not. Halford failed to score again for the team from Roots Hall. His most notable moment playing up top for the boys in blue came in a crucial home game against Crawley Town. Under pressure from Halford, a Crawley Town defender slipped and let the striker in on a one-on-one against the goalkeeper. Rather than charging at the keeper and towards penalty area, Greg Halford attempted a 40–50-yard chip. This chip, sadly, was limp and inaccurate and subsequently easily dealt with by the keeper. On twitter, Halford expressed his frustration with himself – “Wrong decision from me taking that shot on in the first half looking back on it. Gotta be more ruthless.” A kind-hearted Southend fan replied, “Good effort trying to lob the keeper. 5 years ago you would have burst through and buried it.” Perhaps he would have.

Chronicling the storied career of Greg Halford is an exhausting but fascinating endeavour. It serves as a good example of how the unsettled economics of the English Football League can adversely affect the career of a player who struggles to establish himself in the top tier of English football. Clubs struggling to stay afloat tend to turn in desperation to versatile and experienced players like Halford with the hope that they can inspire the team to achieve better results which ensures greater financial security. This rarely works and burdens these types of players with an inability to settle down in any one place.

For The Shrimpers, this venture was predictably futile. An aging and cheap Greg Halford was not able to effectively lead the line consistently for or indeed repair the broken business model of Southend United. One would be surprised if Southend’s relegation season was Halford’s, who has been a fixture of the top four leagues of the English Football for nearly eighteen years, swan song. But if it is, we must recognise the impressive career of a gifted individual who takes the putative terms ‘versatile’ and ‘experienced’ to a whole new level.